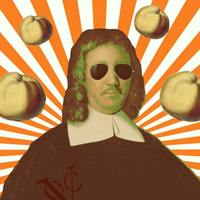 Earlier this month HORTGRO broke a new record when we had over 3000 hits on our Facebook page. The popular post broke the news that a golden apple was found on a farm in the EGVV area. The date it was posted: April 1 2016.

“Breaking News: Golden Apple found on farm in EGVV. Farm workers on a well-known fruit farm near Grabouw, discovered the apple while preparing land for a new orchard. The apple is 100% gold. According to a team of archaeologists from UCT the apple dates back to the 9th Century – roughly the same time as the Mapungubwe era where other famous golden objects were discovered. How it got to the Grabouw farm however, baffles the scientists. The apple will go on display at the National History Museum in Cape Town soon.”

Another posting that created quite a stir was, was ‘Jan van Riebeeck Oes Eerste Appels’.

Running an organisation and not utilising social media as a tool to do so, has become an unthinkable act. Social media — when used strategically over time — is the most powerful form of communication that the world has ever seen. But it’s not a magic bean that grows into a success overnight. It’s a platform for real work. That’s why it is important for us at HORTGRO to stay in touch with you, our stakeholders.

HORTGRO uses social media to build and maintain relationships. It’s an efficient, cheap and fast way to interact and inform our stakeholders. By creating conversation, we stay in touch with your needs and wants. HORTGRO’s Facebook page is currently at 942 likes and the HORTGRO Science page at 353. Our Twitter following on @HORTGRO stands at 634. Help us spread the word and share information the social way. Remember we are here to help grow your Fruit IQ.