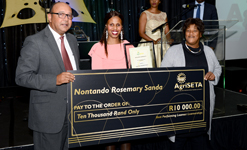 Rosemary works at Romansrivier and is head of technical operations, supervisor for the agricultural chemicals storage room and quality controller. In October she won the National AgriSETA award for the best achievement in an NQF Level 4 Learnership, Farm Management.

“During 2016 Rosemary Started with an NQF level 1 learnership through Koue Bokkeveld Training Cente and she did extremely well in this learnership as she won the award for the student with the best potential in the whole of the Witzenberg district,” explains Jacob Coetzee, Learnership presenter from the Koue Bokkeveld Training Centre. “The training centre then recommended that Graaff Fruit nominate Rosemary for this national award which they did and she made us all proud by bringing home top position in the competition!” 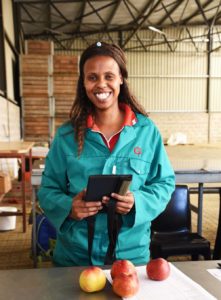 Rosemary was doing a quality inspection on the new season’s first fruit when we spoke to her. She beamed from ear to ear when asked about her remarkable achievement. “The AgriSETA award ceremony was in Johannesburg on 3 October and my manager Jerry Frederiks and Jacob Coetzee from KBOS were both at the award ceremony with me. I was very nervous as the competition for this award was quite considerable so when I was announced as the winner, I was really overwhelmed by this enormous honour. It was great to have the support with me at the ceremony,” says Rosemary.

“I was born in Sterkspruit in the Eastern Cape and grew up there and later moved to the Western Cape. My family moved between Ceres and Sterkspruit as seasonal work permitted and my mother still lives in Sterkspruit. She is a teacher and has always encouraged me to study hard and much of my inspiration to succeed at my studies comes from my mother.