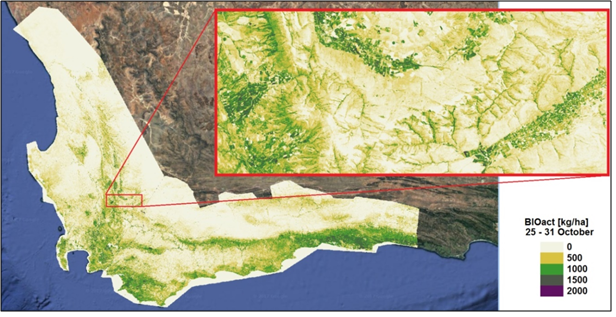 In the Western Cape of South Africa, all eyes have been focused on the taps during the 2017-18 summer. Dust storms could be seen clouding the sky above bare dams as shown in Figure 1. Three dry winters in a row caused dam levels to drop to record low levels. At the end of October 2017 the average dam storage level in the Western Cape was approximately 39%[1]; by far not enough to fulfill all domestic, industrial and agricultural water demands during the South African summer. As a result, firm measures were implemented to avoid potential disaster by a combination of establishing new water sources, decreasing unproductive water losses (leakages) and firm water restrictions. The impact of the drought on irrigated agriculture during the 2017-18 season has been high. The total economic loss is estimated at ZAR 6 billion with 30 000 jobs lost in the agricultural sector 1,[2].

During the 2017-18 summer production season water restrictions of 50% were implemented in the Breede Valley, 60% in the Berg River and Riviersonderend region and various other regions and 85% or more in the Lower Olifants River Valley[1]. In response to the water limitations, in many areas crops were removed and shredded to produce mulch for fields which were kept in production. For orchards and vineyards, this approach will have a long-term impact on productivity as it will take substantial time to replace the trees and vines that were removed. Where such extreme actions were not followed, an insufficient amount of water resulted in a reduction in yield quantity and quality. It is further expected that the absence of post-harvest irrigation will negatively impact production in the 2018-19 season.