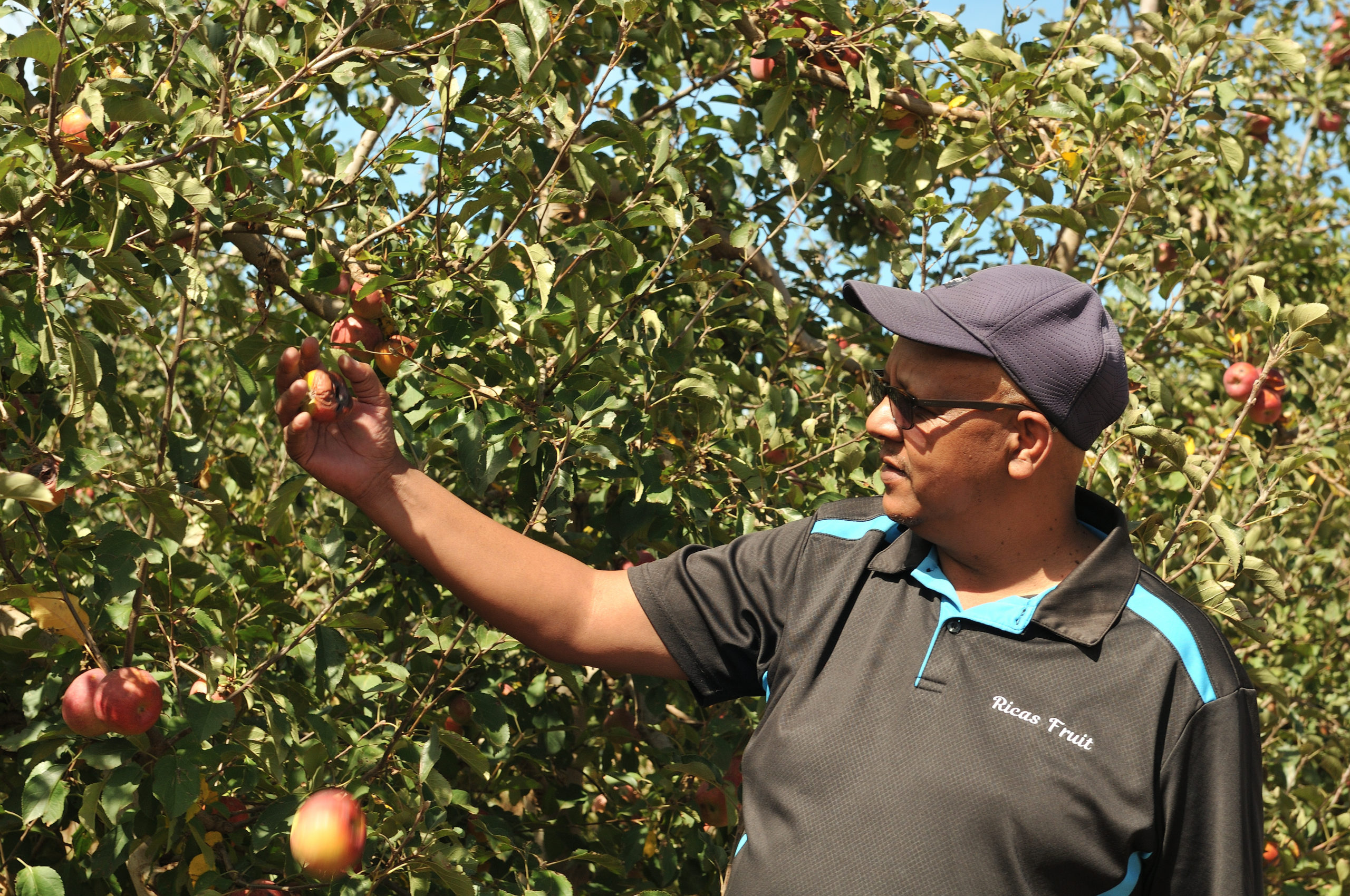 In January of this year, one of the biggest nightmares for any fruit farmer became a horrible reality in the Langkloof. Hail. Some farmers were fortunate, some less so and some got wrecked by the falling ice. Ricardo du Preez from Langfontein near Misgund in the Langkloof lost 95% of his crop. Wrecked, that is. The question is, how does one recover from a disaster of that magnitude?

Three minutes. After a whole season of day-by-day dedication, nursing, pruning, helping those trees, the blossoms and budding fruit, it only took three minutes. All gone.

Actually, losing 95% of your crop effectively means losing it all. In reality, a total wipe-out, because trying to rescue the 5% of your undamaged fruit is just too impractical and not cost effective. They will all go for cider or fruit juice. A meagre consolation compared to what your remuneration should have been on the export market. And yes, there is the umbrella of insurance, but between the juice and the pay-out, you are still not where that bumper crop would’ve got you.

The Langkloof is a unique and somewhat enigmatic pome and stone fruit production area. However, producing 20% of all apples in South Africa, it is crucial for the industry. And it is enigmatic because, at present the Langkloof, basically in its entirety, has been in a scorching drought for seven years. Still it produces. Yet, when the water came in January, it came in the form of ice.

On Tuesday 12 January 2021 Ricardo du Preez was standing on his porch, cup of coffee in hand, looking out over his apple orchards on Langfontein. He was feeling good. He was feeling blessed. Never before has he had such a bumper crop. In fact, he almost felt intimidated by the quality, quantity and size of the fruit hanging on the trees.

“Three minutes. After a whole season of day-by-day dedication, nursing, pruning, helping those trees, the blossoms and budding fruit, it only took three minutes. All gone. Have you ever seen a red ripe Fuji being hit by a hail stone? There’s a hole in that apple, and it goes black. Pitch black. I was sinking into that black hole. In fact, as I was standing there, looking at this destruction, the only thing I did was blaming God. Giving me my best crop ever, then just ripping it away. With hail stones as big as golf balls. The biggest one I picked up was the size of a tennis ball, the size actually of many of these apples …”

Terminal velocity of hail, or the speed at which hail is falling when it strikes the ground (or the apples), varies. It depends on the size and weight of the stone and it is calculated that a hailstone of 1 centimetre in diameter falls at a rate of 9 metres per second (32 km/h), while stones the size of 8 centimetres in diameter fall at a rate of 48 metres per second (176 km/h). So the biggie the size of a tennis ball (6,87 cm) that blasted through Ricardo’s apples was destroying at the speed of around 150 km/h. In short, disastrous destruction.

The question is, after such a disaster, how do you not only survive, but how do you recover?

“The one advantage is that, while the fruit were destroyed,  the trees did not get structural damage. On the long term, there is minimal damage. Being positive, thunder storms and especially hail introduces a lot of nitrogen into the soil which will help the trees with good growth in spring. The good with the bad, as they say. Fortunately my nectarines were harvested before the hail and my Rosemary’s had only about 3% damage,” explains Ricardo, demonstrating the never-ending positive belief and attitude of these farmers being hammered, yet getting up again and again …

However, with the crop gone, one has to make a plan (read money) to get to the next crop on the way. Ricardo is positive that he has the right backers to help him pull through. A group of investors that has seen the farm in action, that understands that the hail wreckage was not bad farming practice, but a natural disaster. And that the farm Langfontein and Ricardo have a pristine track record.

Being a farmer in South Africa is not always easy. On the contrary … Being a farmer in the Langkloof possibly a little more so, some might say. You see, on the southern side of the Kloof, you have the Tsitsikamma mountains, in itself a key factor in supplying water to the area by offering a good catchment area for rainfall. However, hail is also much more common along mountain ranges exactly like this because mountains force horizontal winds upwards (known as orographic lifting), thereby intensifying the updrafts within thunderstorms and making hail more likely. But then again, the water in liquid form or an iced unwelcomed form might just stay away completely, causing drought, yet another farmer’s nightmare.

On 13 January of 2021 the hail hit Langfontein. Ricardo, the farmer responsible for its bumper crop was devastated alongside his ripped apples. Standing there, watching this carnage he, a deeply religious man, blamed God. The hail stones hit him into a depression. But, working through this disaster, Ricardo does not blame anyone any more. He believes he understands it all now: “Yes, there was this  bumper crop. But maybe, just maybe, I was not able to hold my own against such  crop. Maybe it’s a case of having to eat some humble pie. Getting down to earth. You see, the thing that I learnt from this disaster is to change my attitude. I was referring to it beforehand as my crop. But it was never mine. It wasn’t ours. We are just the custodians, responsible for looking after it. I made peace with the fact that it was taken away.

“Therefore, next time, I will be ready for making it happen.”

Positive folk, these farmers of ours …