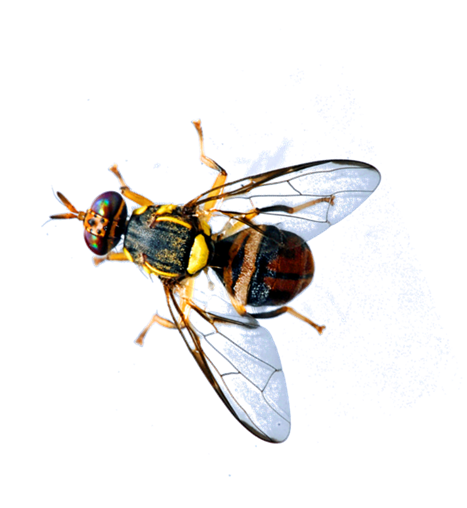 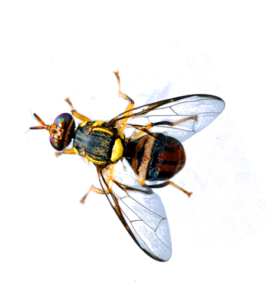 Over the past decade Hortgro has been pro-actively preparing for the possibility of the occurrence of Bactrocera dorsalis or Oriental Fruit Fly (OFF) in the Western Cape.  Hortgro Science’s Crop Protection Programme has been conducting research since 2005 in an effort to prepare for such a possibility, said Hugh Campbell, Hortgro Science’s General Manager.

According to Campbell, there are 1400 monitoring traps in the Elgin, Grabouw, Vyeboom and Villiersdorp region alone. These traps are part of an area-wide monitoring and control initiative for fruit fly. This programme is managed by FruitFly Africa (FFA) and is supported by the Department of Agriculture, Forestry and Fisheries (DAFF) as part of a national surveillance programme.

“Immediately after the first OFF was caught the national action plan was implemented,” Campbell said. “All growers and packhouses in the region were notified and an area of a 5km radius of the trap was placed under quarantine.”

A removal permit which is based on control and containment actions is now required to move the host material to a pest-free area. A delimiting survey was implemented by FFA to identify the potential spread of the fruit fly and weekly control measures have been implemented by the growers and FFA as part of an eradication programme. If no further OFF are caught in any of the delimiting traps for a period of 12 weeks or three generations of the OFF, the area will be considered as eradicated and the quarantine measures will be lifted. The area will then be declared as eradicated.

According to Campbell OFF, a fruit fly of Asian origin which was first discovered in Kenya in 2003, has established itself in Limpopo, Mpumalanga, North West and parts of Kwa-Zulu Natal. “It is an evasive fruit fly that can cause considerable damage if not controlled. Its preferred host is mangoes, but it has a wide host range and all efforts are being made to keep it from establishing itself.”

This is the first time that it has to be eradicated in the Western Cape and all efforts are being made to ensure that it does not establish itself in this region or in the other regions of SA that are currently free of the pest.

Campbell said that the experience they have from the regions where it has established itself is that it can be successfully controlled in commercial orchards – at a cost – but it has caused considerable damage to mangoes in the informal sector and house gardens where no control measures are implemented.

Campbell stressed that the specific area is under official control and the action plan that is being implemented under the control of DAFF subscribes to the principles of the International Plant Protection Convention. The objective is to isolate the problem area and eradicate the source of contamination.  The remainder of the Western Cape is not affected by this point interception and trade will continue as normal. Fruit trading may, therefore, continue in compliance with established additional risk mitigation procedures.