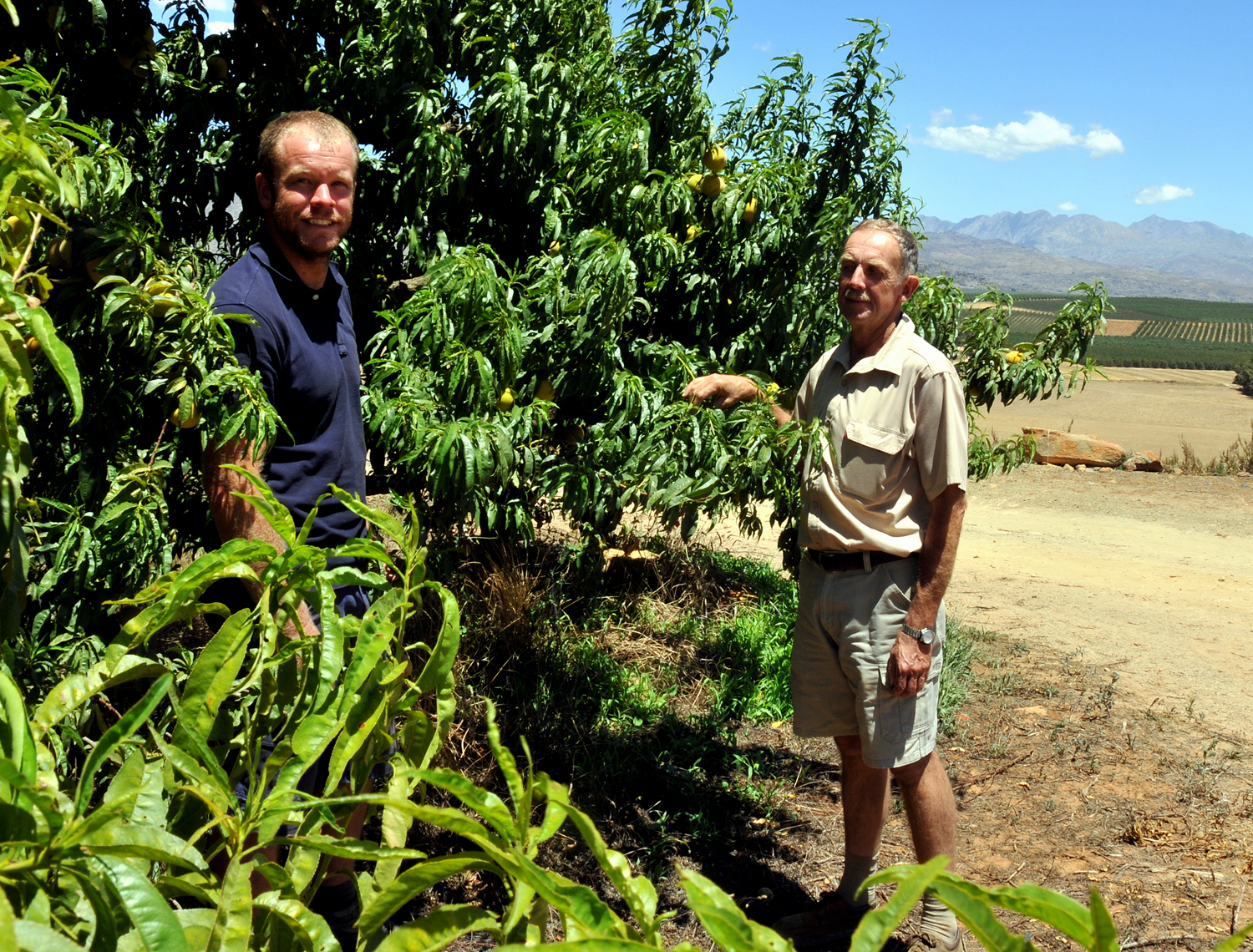 Making a success of something in life is all about momentum. Progression. Growth. But to be able to do it well, you need to feed the stream. Gerrit Rautenbach looks at how the custodians of the farm Fonteintjie are doing it … 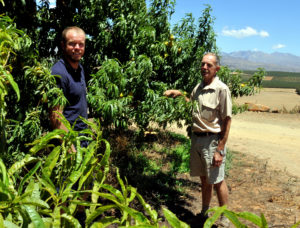 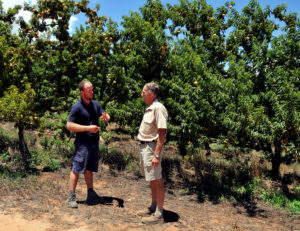 Gerrit and Thinus van der Merwe in the orchards.

When you arrive at the farm Fonteintjie (meaning “Little Fountain”) situated 55 kilometres northbound from Ceres via Prince Alfred Hamlet on the way to Citrusdal, you know you are at a special place. First of all, you are in the heart of Koue Bokkeveld. It is one of those bucket list names, one of those places that you have to see for yourself.

Fonteintjie lies on the high ground between the Olifants and Doring Rivers. Apart from the fact that it is visually a beautiful stretch of Africa, I immediately saw that this is a well-developed and organised centre for farming. Nothing elaborate, but well-structured. Neat.

In essence, I was there to get the youngest member of the business, Gerrit van der Merwe’s story. The man who is geared to take the reigns. However, when I arrived he was doing what a young, ambitious farmer should be doing. He was taking care of the business.

Therefore my conversation kicked off with Thinus, his dad.  He explained that his father, also Gerrit, bought the farm Fonteintjie in 1951 for an astonishing £23 000 (a mere R46 000 in those days). At the time of the purchase Thinus’ father and his brother were farming together on the neighbouring farm, but Gerrit decided to relocate. And started producing fruit in all earnest. Apples, pears, peaches, and prunes. He had some sheep and cattle as well, but the primary focus was fruit.

Farming in those days was just that. Farming. Producing fruit and sending it off. Done deal. From the trees into crates and then with the mail bus – a double-decker with one deck for passengers and the rest of the goods –  off to the market.

Seven years later Thinus was born and grew up on the farm, loving every second of his barefoot days. He never ever thought of doing anything else but farming Fonteintjie one day. But he thought – with all due respect to his dad Gerrit –  that he, as the next generation, would upgrade the incredible production into a more diverse and modern business. So before just falling in, he went to Elsenburg for a three-year agricultural diploma. Then he started on Fonteintjie in all earnest. Even though he was holding a higher qualification than Gerrit, his dad taught him how to get the soil to yield. How to be an owner-farmer. But he taught Dad how to turn farming into a better, more profitable business. When Thinus joined his dad the farm they had to manage 20 people. This changed over time to 200. That’s a different kind of management.

As most young men do, he fell in love (well he has always been in love with farming), but he fell in that other kind of love. He married Etta and 30 years ago, she gave birth to a daughter, Hannelie and two years later a son was born,  proudly carrying the name of his grandfather, Gerrit van der Merwe. From then onwards, Grandpa was known as Oupa Gert, a name … well, actually more a title … that stayed with him until his last breath. Everyone called him Oupa Gert. With respect. With love.

Gerrit Junior’s earliest memories are that of Fonteintjie, of their own personal paradise. He went to Koue Bokkeveld primary school in the nearby village Op die Berg and later to boarding school in Ceres for his high school years. During those years he decided he wanted to be an engineer. Mechatronics fascinated him. Making things work easier, smarter faster. Thinus never stood in his way. He was free to choose his own future. Thinus said that he’ll give him ten year’s grace to decide whether he wanted to be part of the farm or not.

So after school, he enrolled for a degree in mechanical engineering at Stellenbosch University, but very soon the idea of four years of mathematics and applied mathematics got him wondering. B.Sc. Agric only requires one year of maths, and after all, Fonteintjie is there, always there. He had ten years …

While he was creating lots of food for thought on the academic front, Thinus and Oupa Gert were being fruitful on Fonteintjie. But Oupa Gert was not getting any younger. So while his grandson was at university he relocated to the retirement home in Prince Alfred Hamlet but never lost touch with the farming. He remained a sounding board for Thinus, keeping track of what Gerrit Junior was achieving at varsity. In fact, close to the retirement home was a barren piece of land that he started farming, making the yield part of the Fonteintjie package. All the time, however, it was as if he was patiently waiting for the right thing to happen. Knowing the right thing will happen.

In 2014 it did happen. Gerrit, his grandson, finished his M.Sc. and although Stellenbosch University wanted him desperately to enroll for a doctorate, he made his choice. It was time to join the clan fulltime at Fonteintjie. That was a very special time. For a short period the three generations, Oupa Gert, his son Thinus and grandson Gerrit, were all looking after their fountain together. This was what Oupa Gert was waiting for. At the ripe age of 91, Oupa Gert was feeling blessed. The circle of life. He was happy to hand over his legacy to his namesake. Knowing Dad Thinus will still be there to help steer him.

It was time to move on …