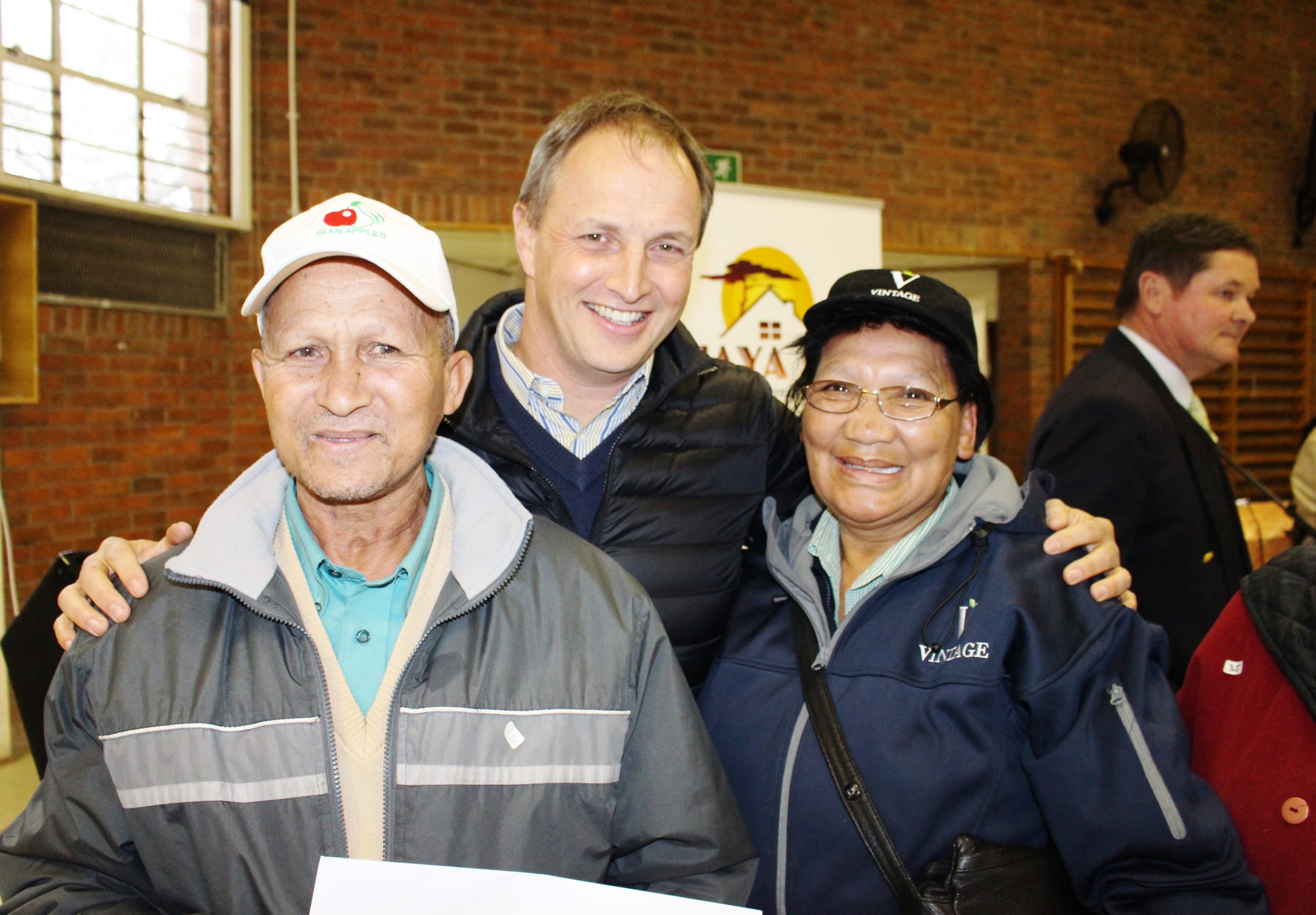 The atmosphere in Grabouw was thick with emotion last week when 58 deciduous fruit workers received title deeds for their homes.

Mr Temba Nolutshungu from the Free Market Foundation (FMF) said that the Natives Land Act of 1913 economically castrated a large number of South Africans. “This type of legislation not only disempowered people, but also took away their self-respect. Today we are restoring that, we are giving back your dignity.” Nolutshungu said that the new home owners are now part of the South African economy and that they should play their part and take responsibility for their new homes.

The mayor of Theewaterskloof, Christelle Vosloo, said the process to restore home-ownership for the residents of Grabouw has been a long and difficult one. Many people and organisations were involved. The deciduous fruit industry, Two-a-Day, Elgin Foundation, Khaya Lam, and the FMF worked with local government to make this day possible. According to Vosloo they are hoping to hand over another 300 title deeds to Grabouw residents soon. “Dreams come true when we all take hands and work together,” she said.

Derek Corder from the Elgin Foundation said that the EGVV growers association was inundated with requests for projects and social upliftment after the 2012 labour unrest in the Western Cape. Under the guidance of local fruit producer Dr Paul Cluver,  the Elgin Foundation (EF) was formed and tasked with improving the lives of the poorest of poor in the area. The EF is mainly funded by apple and pear growers from the EGVV region. “Today is a historic day and we are proud of this achievement, specifically to restore people’s dignity and thereby changing the lives of workers and their families.”

Two-a-Day managing director Attie van Zyl said their group employs thousands of people in the EGVV region and if families are taken into account the group has an effect on the lives of 32 000 people. “We are excited about this achievement and the potential that it holds for these families.” In 2017 Two-a-Day gave bursaries to 65 students from the area. “We strongly believe that no child of any agricultural or pack house worker, who has the potential to study further, should be left behind. We will see to it that they are given the opportunity to fulfil their academic potential.”

Annie Plaatjies and her husband George Seeges were one of the 58 families that received the title deed of their home. “We can’t stop crying, we are overjoyed. On Sunday my whole family is coming to our ‘new’ home and we are going to have big braai,” Plaatjies said.

Plaatjies, who has been packing apples for 44 years, said that they moved into their current home on the March 16, 1989. “But today, is the real day. We will always remember July 25 , 2017 and celebrate it.” Plaatjies started packing apples three weeks after the birth of her first child. “Today I am line manager and team supervisor at Vintage pack house in Grabouw, and I still love my job.”