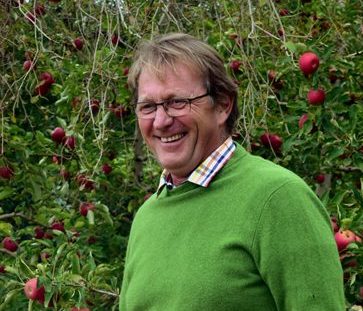 After an incredibly memorable career as a national and international cricket idol, Adrian swapped the red ball for a red apple. And golden ones. Some pink ladies … Gerrit Rautenbach visited him in Elgin. This is his story.

Ever since Adrian could walk, any kind of ball made all kinds of sense to him. Already in St Johns Preparatory School in Johannesburg it was all about cricket, tennis, football. But especially cricket. Sure, apples were always part of his life as well. But, only as part of a healthy growing boy’s diet then. After all, an apple a day as Mom used to say … But never ever for once did he think he might one day end up with many more apples than cricket balls in his life.

However, when he was about to go to high school his dad bought Rosenhof, an apple farm in Elgin. Dad was then an entrepreneurial businessman and saw this as a good investment. Moneywise and lifestyle-wise. So they relocated. Dad appointed a manager to do the farming and Adrian went to Bishop’s in Rondebosch as a boarder. He had little interest in the apples of Rosenhof (apart from munching them), but life was still good because Bishop’s was a great sports school. Apart from his favourite cricket, he also got introduced to rugby for the first time.

“It took me a while to understand this game. At first, I thought it was a game of aggression, where you had to donner the other oke more than he donners you. Eventually, I learned it was rather about outsmarting him. Getting around him. Unfortunately, rugby left some serious injuries. My shoulder, my knee. It had a detrimental effect on my cricket career…”

After matric and by the time he went to Stellenbosch University, he was already playing for Western Province B. Remember, provincial sport then was serious stuff. This was 1978 and South Africa was completely choked out of international sport. From the B-team he not only progressed to the proper WP team but later on became captain, winning the coveted Currie Cup (now known as the Sunfoil series). Yes! He also captained the Boland team and played for Derbyshire in England.

“What did you study at ’varsity?” I asked him.

“Why, I thought you weren’t necessarily interested in farming?”

“It was kind of the easiest solution then. It kept everyone happy. And gave me the chance to play cricket,” he chuckles.

And that he did exceptionally well. Eventually, he played in the unofficial SA side against Grahame Gooch’s rebel team from England. And in 1992 we were reintroduced into international sport. Adrian got selected to play in the first official test against India. It was one of the ultimate moments of his life. To be part of that team of South African brothers. He was 32 at the time.

From there onwards he played 25 one day international games and one world-cup bout, becoming a legend all-rounder, slamming sixes, taking wickets. Thousands cheering. At the age of 37 his rugby knee made him retire, plummeting him down to earth. Hard.

He realised he will never have that adrenalin rush and elation again.

Back on the farm, he understood what post-natal depression must be like. Even if he produced the world’s best apple, the masses were not going to jump up and do a Mexican wave about it. He missed the roar. The excitement. He missed his team. He knew he was a good sportsman. “But will I ever be a good farmer?” he asked himself.

Backtracking a bit in time … He got married to Jean Bergh in 1984. Although she was a willow-widow for the first twelve years, she always cheered for him. Three kids were born: Claire, Sarah, and Paul. His family life was always solid and he never battled to be a father, but he battled being a farmer, being away so often. Even weekdays were only half-days as he had to leave every day at two for cricket practice.

“I had to employ a manager to be there on my behalf and in those years when others developed into proper farmers I kind of stagnated. I wasn’t present enough to tell the manager what to do …”

Coming down to earth he realised that his new playing field was exactly that: the earth. And growing fruit from it. He had to work out what will, from that stage onwards, make him happy and content in life. He had to find a new high. He also had a lot of catching up to do. First there were fours and sixes. But later on he was at sixes and sevens with his orchards getting too old. Replanting too costly …

“After my cricket days were over and I was fulltime back on the farm, I battled to get to grips with being a farmer. So I decided to yet again get a manager on the farm while I got an outside job, working for a leading estate agent group, eventually running several offices in the Overberg. I was successful, but I wasn’t happy. I went to see a sport psychologist. He asked me to list the top eight things is my life. Looking at my list, he commented on the fact that my family, the farm and being happy was top of the list, but I was stressing most about the thing that was last on that list. I resigned before I even got home. I accepted then I was a farmer and I didn’t want a manager. I mean, then what was I going to do?  After all, I’m a player, not a coach.”

Adrian had a booming 20 years as a cricket superstar. Suddenly that came to an end. It took him the next 20 years to reinvent himself. Today he is happy being the new Adrian, the apple farmer.

He has swapped the Proteas for the Sundowners. As a cricketer, the most amazing thing for him was not hitting those sixes and bowling those guys out, it was the incredible camaraderie, being part of the team.

It took him a while to realize that the rules and playing field might have changed, but he is today just as much part of the team. This team consisting of his wife Jean and kids Claire, Paul and although Sarah is a successful architect in Johannesburg, she’ll always be cheering for the Sundowners. Plus all the incredible hands on the farm. And all them apples. The pink ladies …

Adrian drove me around Rosenhof, showing me the fruit of their labour with pride. Introducing me to the snail patrol doing the goosestep through the orchards. Along the way, his daughter Claire, the organic vegetable grower joined us. Then we came to an interesting looking “virgin” orchard being planted.

“This is something relatively new in apple farming,” Adrian began, “but it was Paul who got us onto it.”

Although qualified as a mechanical engineer, their son, Paul, is full time involved in the farm. He followed a way of establishing newer, better, fresher apple saplings for Adrian. Introducing the greenhouse generation.

The principle behind it is to get tissue culture rootstock which is then grown in a medium of coconut bark – or coco peat – in the greenhouse. The trees get continues nutrition and irrigation, making them grow very quickly. The essence is you’ve got rootstock that is not contaminated by the pathogens one can find in nursery soil. You end up with a clean plant with strong, beautiful roots.

This is all new territory for them. They bought the rootstock, got the bark and created the first batch for Rosenhof farm, waiting now to see what it will produce. Paul discovered this concept when he went over to America with Fruitways. “Why don’t we grow our own trees?” he thought. They have had greenhouses for ages, originally for cut flowers which they don’t do anymore. As the core of their business is apples, this made so much sense.

While telling this story, Paul joined us and they got involved in the planting process. I watched Claire watching Adrian.

“What makes him special?”

“Well apart from him being my dad of course … you know … the thing is, he just … well, likes to make other people happy.”