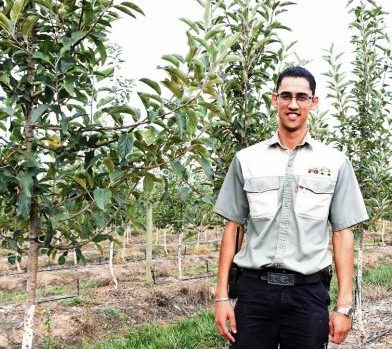 Richard Myburgh started out as a fruit hawker. His business was small but grew quickly. Soon he outgrew the packhouse that he was renting and it was time for him to buy his own farm.

Today, despite some serious drought challenges, commitment and a strong future vision are just two of the impressive traits that put the Myburgh clan from Cortina Farm a cut above the rest.

Although this 54 ha farming initiative at Vyeboom, near Villiersdorp, was established by husband and wife team, Richard and Yvette, in 2000 – the three Myburgh youngsters are just as enthusiastic and eager to take this farming operation to the next level.

In addition to the 40ha of apple and pear orchards on the farm, Richard and Yvette have also developed a sizable fruit packing, marketing and transport business on the property. And the by now large Cortina trucks transporting export fruit to the Cape Town harbour is a well-known sight in the area.

In the deciduous fruit business the family has established themselves as strong industry contributors, with dad Richard winning the Deciduous Fruit Industry’s New Entrant of the year in 2014, and young Ricard, who joined the family business in 2013, won the Toyota SA New Harvester award in 2017.

The current water shortage in the Western Cape has had a big impact on Cortina Farm as their water allocation has been cut by 60% for the current growing season. “We are currently in survival mode with regards to water and are investing resources in improving our water management systems with improved technology such as water meters and irrigation programmes,” explained Ricard. “We have also sunk two boreholes which are helping to provide much needed additional water.

“As part of our general farming practices, we increase the reserves of our trees through generous foliar fertiliser applications. Under the current water-stressed conditions, the increased resilience created by these applications has proved to be highly beneficial for our orchards and our yields have been remarkably good despite the water shortages.

“We have 40ha of orchards and currently the farm produces between 6000 and 6500 bins of apples and pears annually. Of this, 50% is for export, 40% is class 2 fruit and 10% goes to Elgin Fruit Juices. We want to replant a further 2ha of orchards and we plan to use new higher density planting methods by planting the trees closer together than is the usual practice in South Africa. During recent visits to apple production regions in the USA and Italy to investigate the new varieties and rootstocks available and to study the advances in production methods I saw how growers achieved higher productions using these planting methods.

“We are also investigating the availability of dwarfing rootstocks as we need to start producing smaller trees that yield exceptional volumes of high-quality apples and pears to replace older large tree varieties which are not necessarily good bearers. We plan to combine this with mechanising certain production practices here on Cortina.”

Ricard explained that the types of mechanisation he was referring to would not replace jobs but make working conditions easier for workers, particularly in the orchards. An example of this is mechanical platforms that are used in the orchards to replace ladders. These are less hazardous than ladders and also improve productivity.

Although Richard and Yvette never received any monetary support from government to purchase the farm, they received approximately 1,8 ha of fruit trees through the Hortgro ‘Boompieprojek’ and received additional funding from the Western Cape Department of Agriculture. For this and the support via the Jobs Fund, they are extremely grateful.

Through the Jobs Fund, they received 2.6ha of new Golden Delicious and Royal Beaut apple trees in 2016. The support included soil analysis and preparation, poles and trellising and irrigation.  These trees were in great condition and are growing well.  During 2017 we received a tractor, fencing, moisture probes and a mobile toilet. We are not expecting to receive anything during 2018 and in 2019 we expect to receive tillage and disc plough soil preparation implements.

“Currently we have 20 permanent workers, 60 seasonal workers, and 20 packhouse workers. Planting, establishing and maturing the new orchards will make it necessary for us to increase our permanent workforce and thus create more jobs within our business. This type of farming is highly labour intensive and although we rely heavily on labour, it is a constant struggle to find and keep labour for the duration of the harvest. Work on the farm is often very physically taxing and many seasonal labourers start out keen and enthusiastic initially but do not stay with us for the course of the season. To be honest, finding and keeping enough labour for our needs is a constant challenge.”

The Myburgh family is very committed to farming and apart from Ricard, his two younger brothers Billrae and Willrick, are also keen to become involved in farming. Therefore Cortina has a long-term growth strategy. “In our future planning we would like to expand our farming operation and would like to purchase additional land to make this a reality,” concluded Ricard.