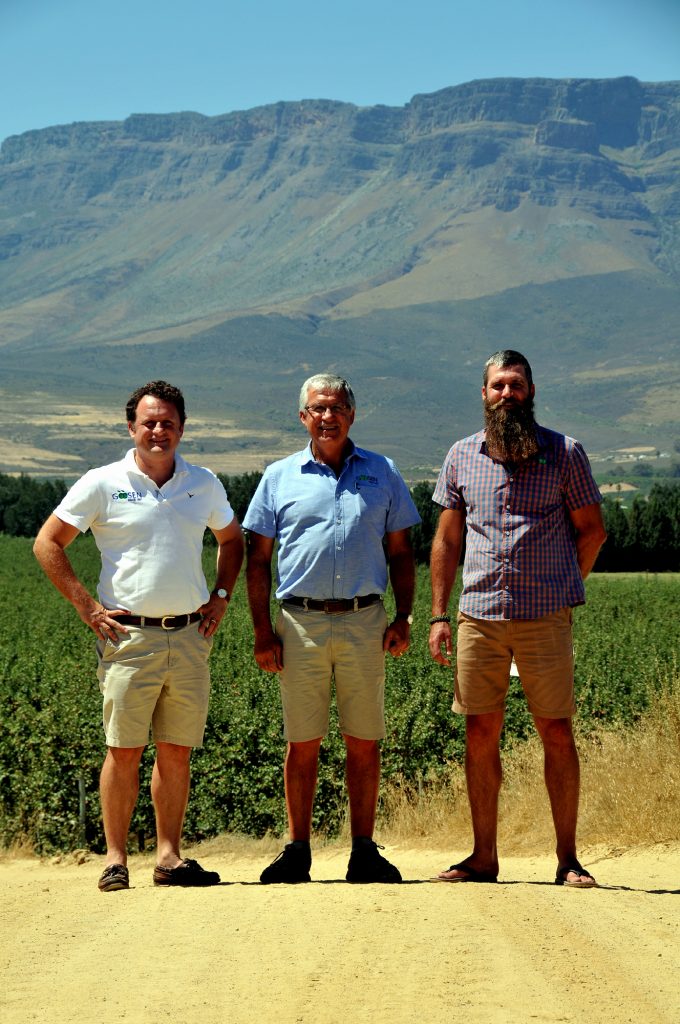 Some prophets of doom believe farming is on its way out (because farmers are a threatened species, they say). Finding a farming concern going stronger than ever after six generations cast a different light. Gerrit Rautenbach visited the Goosens near Prince Alfred’s Hamlet to hear their story. 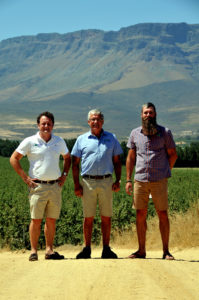 Looking at the Google Maps coordinates pinpointing the main Goosen farm, it strikes me as somewhat out of the ordinary to see that the farm lies virtually inside the town of Prince Alfred’s Hamlet. I mean, I am quite used by now that the farms I visit are sort of, well … in farmland territory. Not in town. Be that as it may, all was revealed the next day when I arrived.

Waiting for me in the boardroom were three men looking like they belonged in the boardroom, but also looking like they are just as at home in the orchards. Hardened farmers, clever businessmen. I got introduced first of all to Danie Goosen, his son JC (Johannes Cornelis) as well as JC’s cousin, Janus (also christened Johannes Cornelis). The most noticeable first impression was JC. Well, JC’s beard, to be precise. The beard placed him simultaneously in two time zones. One, as a founding father from a century ago, and two, as a hip supercool director of a modern fruit farming business. I soon learned that a founding father was very much part of the story.

Both JC’s are named after the founding father of the Goosens in the Warm Bokkeveld. The first Johannes Cornelis was born in Klein-Drakenstein near Paarl in 1809 but came to the Warm Bokkeveld and bought the farm Wagenboomsrivier in 1851 for £6 000. A decade later a town structure became a necessity in the area and the intrepid businessman measured out 90 plots, which he sold each for the same price as the original price of the farm – £6 000 a piece. At the same time Queen Victoria’s second son, the then Duke of Edinburgh, Prince Alfred was visiting the Cape Province and Johannes Cornelis thought it proper to name the new town after him.  Prince Alfred’s Hamlet was thus formally established.

With the decent start-up capital from this business deal, Johannes Cornelis started farming fruit in all earnest. For this purpose the farm known today as Jagerskraal was acquired in 1861. Hence the name and slogan of the business: Goosen Farming, since 1861. As the area where the town is today has been part of the original farm, it also explains why the Goosens’ farm is virtually in the town (but nowadays they also farm at Ou Stasie near Wolseley as well as Nuutbegin near Rawsonville).

A very clear picture of this family tree was beginning to take shape. In front of me in the boardroom were two young men, two cousins, very much the future of this farming concern. JC is the production director while Janus is the financial director, taking care of packaging, admin, marketing, and finances. They are the sixth generation responsible for Goosen Farming. Inevitably, however, going from one generation to the next, you need to branch out. After all, it is called a family tree.

So let’s go back one level. Danie, JC’s father and Kleinjan – Johannes Cornelis, (Janus’ father who unfortunately passed away a few months ago) were qualifying themselves in the early 1970’s to be able to become part of Goosen Farming. Danie was at Stellenbosch University studying B. Agric. while Kleinjan went to Elsenburg Agricultural College.

Now, according to Danie, an important factor with a family concern is that each member involved has to have a clearly defined responsibility. First of all, from a geographical side, they purchased Ou Stasie near Wolseley and Kleinjan relocated, giving each man his own territory. But they still ran the business as a singular concern, Danie taking care of packaging, finances, marketing and admin while Kleinjan was responsible for production. It’s interesting to note that the roles have been reversed with the latest generation.

“But now you are in charge of production?” I asked JC.

“My dad said I can come and learn on the farm,” he laughed, stroking his beard. Jokes aside, Father and son both agreed that a more financially oriented qualification will broaden his horizon.

One would believe that being the sixth generation in line, with every generation before taking the reins of Goosen Farming, it was a fait accompli that JC and Janus will have no choice in the matter but to carry on. This isn’t true. Danie and Kleinjan never pressurised them to become involved. They were totally free to choose their own futures. In fact, both took a break from the farm after completing their studies in 2006. They were both 24 years old then.

“Dad said I must first work for another boss. So I went and worked for a year on a fruit farm in America, JC said. “It was good exposure, good to be a general worker on a massive stone fruit farm with many of the same cultivars as we have. This was important as stone fruit is the core of our business. But I’ve already then made a deal with Dad that I’ll fall in at Goosen Farming at the age of 25.” At that stage, Werner du Plessis (Young Farmer of the Year 2011) was general manager and JC started working under him. He had to earn his place. Being the boss’s son counted for nothing.

Janus on the other hand, went to London to work for a financial institution. He was doing it to get bigger, better experience, but was also considering it as a career. In the end, however, the farm wouldn’t leave him. He came back.

Hearing their story I realise that belonging somewhere to something is an incredibly important human trait. But being part of the same thing that has been going for six generations for more than 150 years, stagnation can become an issue. More of the same, every day. It surely is the opposite at Goosen Farming if you look at how the business has evolved. Just like the family tree, the Goosens are branching out constantly. Each generation learns from the past to grow the future.

I look at generation five and six, the custodians of the brand, sitting in front of me. You can see they belong. And according to the grapevine, generation seven is already a reality.