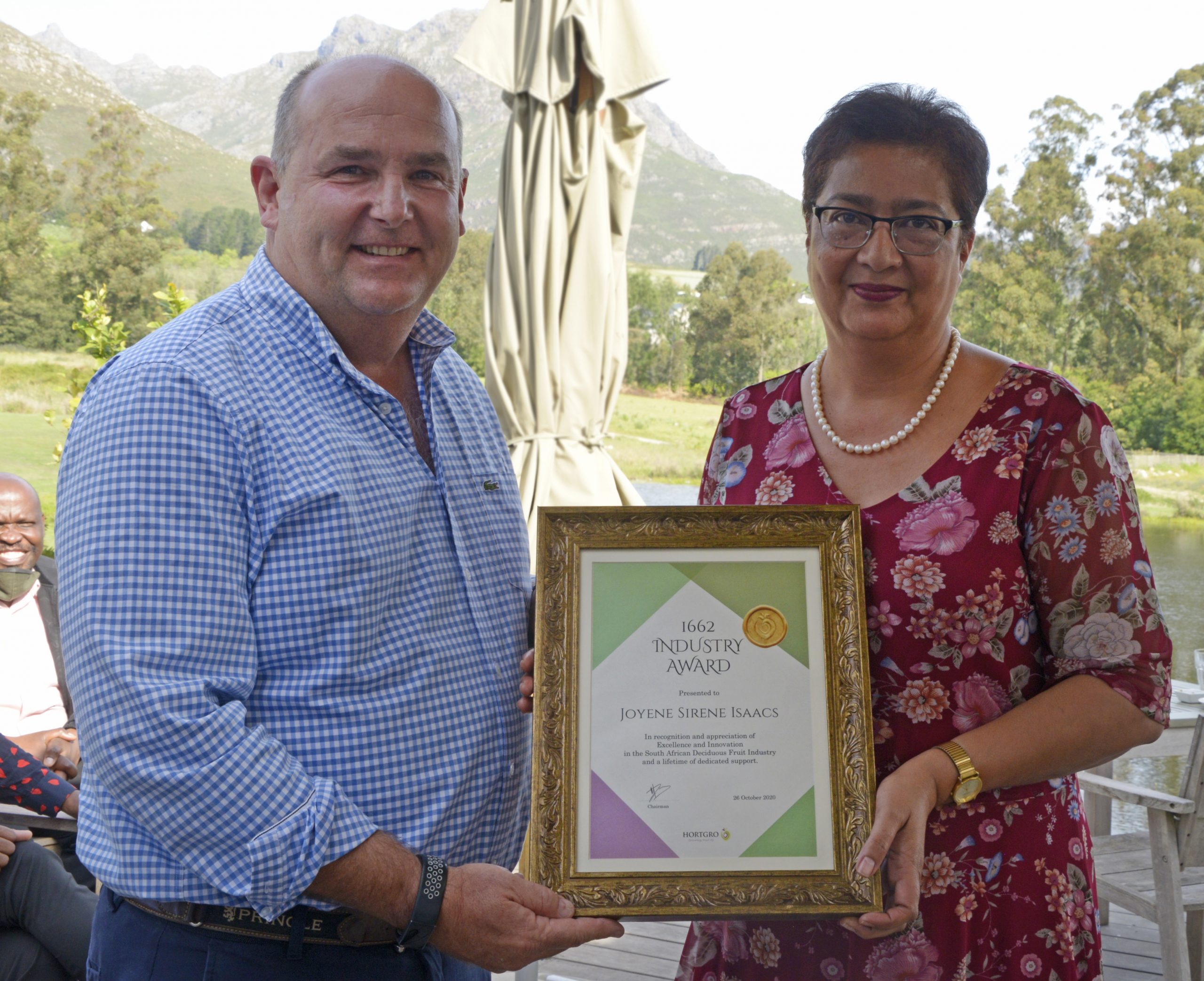 STELLENBOSCH. Joyene Isaacs, former HOD of the Western Cape Department of Agriculture, became the second person last night to receive the coveted Hortgro 1662 Industry Award. Horticulturist Koos Lötter was the first recipient of the award in 2019.

The 1662 Award was created to celebrate the first two Wittewijn Appels that were picked in the Company’s Garden on the 17th April 1662 and to recognise the humble beginnings of the deciduous fruit industry on the southern tip of Africa. Although the award ceremony was planned for 17th April this year, it had to be postponed due to Covid-19.

Hortgro Executive Director, Anton Rabe, handed over the award at a small function outside Stellenbosch, and said that the 1662 Award not only commemorates the humble beginnings of our industry, but it is now linked to honour and recognise the outstanding contributions of individuals or groups to our industry.

“We believe words such as: pioneering, innovative, professional, integrity, ethical, constructive, pro-active; evolutionary-change, fearless visionary, leadership, competence, excellence, solution driven, competitive, and world class, describe our industry. This is echoed in Hortgro’s culture, ethos and delivery of industry services and functions to our membership. And it is this type of individual or groups we wish to honour and recognise through this 1662 Industry Award.”

He further praised Isaacs for her enormous contributions on a wide range of agricultural issues, over an extended period of time. “She has vastly contributed to the success and transformation of not only the deciduous fruit industry, but also the agri-sector in general. Her leadership and vision supported and improved our sector not only in the Western Cape, but nationally and beyond.

“Joyene played a significant role in the development of the ‘commodity approach’ – where industry and the Department’s resources and expertise were pooled to create synergies and cooperation on many levels. A huge gearing and multiplier effect to the benefit of beneficiaries. In this regard her vision and implementation of the original ‘boompie-projek’ was a fundamental shift in agriculture that was later successfully followed up by Jobs Fund 1 and currently Hortfin.”

These support programmes have created a stable platform to gear additional investment. The impact, over the past ten years can be summarized with:

Total amount of income over lifespan of developments: R16.96 bn

“We at Hortgro, believe transformation for the sake of transformation is meaningless. If not meaningful, impactful, and sustainable it is mere lip service. These numbers in my view encapsulates this view and is testimony to an approach that works,” Rabe said. “There are numerous other examples of support and service to agriculture where Joyene (and the Elsenburg team) went above and beyond. To such an extent that we as Western Cape-based commodities are the envy of our sister industries based in other provinces.”

Isaacs said in a short speech, that it is never just one individual who makes anything happening. “Thank you for this recognition, but I have to acknowledge the phenomenal support I received from my team, without whom nothing would have been possible.”