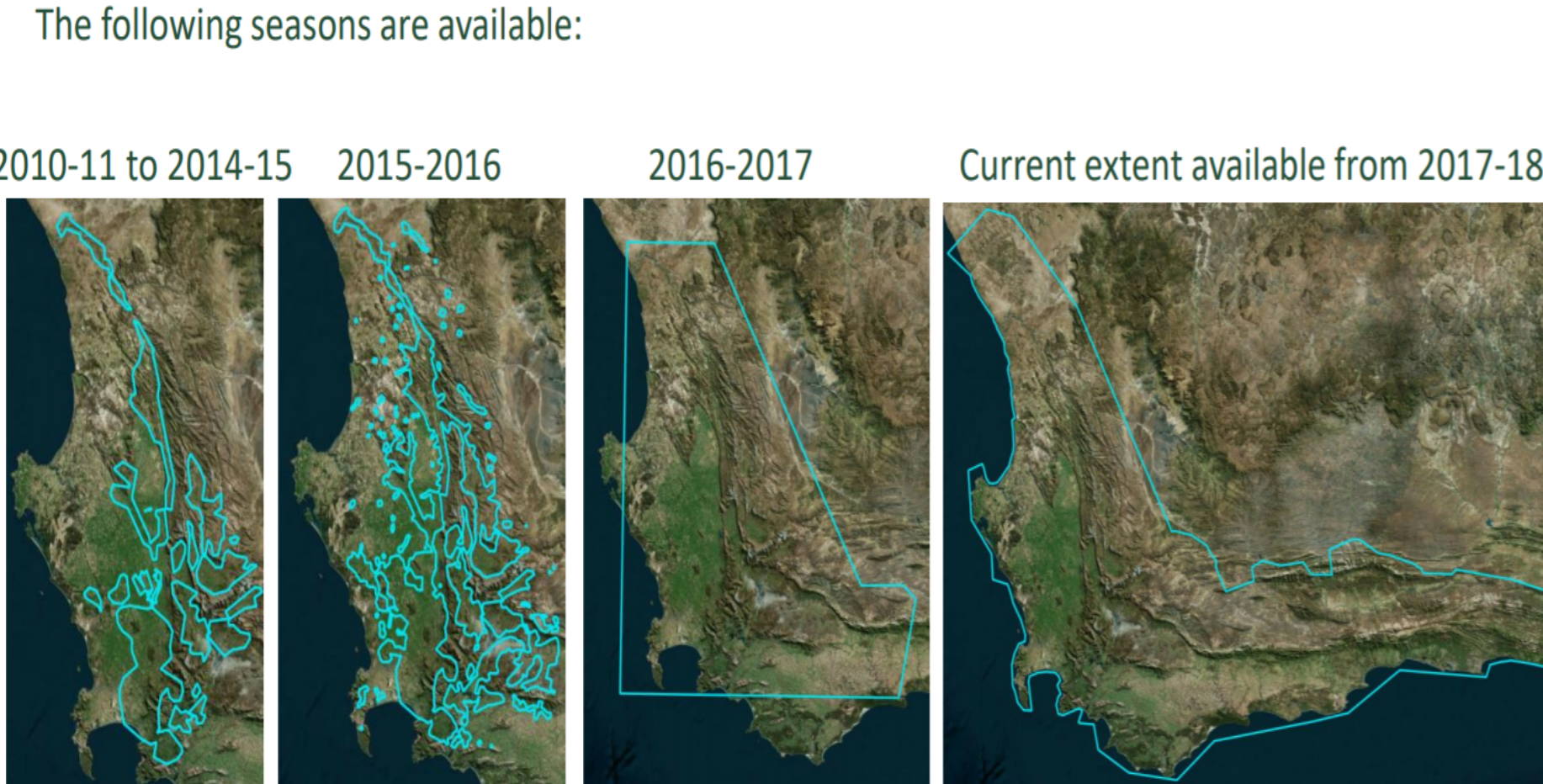 FruitLook is a web-based tool that is informing farmers, consultants and researchers in the Western Cape since 2011. It used to be used primarily for monitoring the growth and water use of vineyards, hence, its original moniker of GrapeLook. Since then, FruitLook has expanded both in coverage area and commodities it is compatible with. Currently, FruitLook covers 9.5 million hectares in the Western Cape. The tool is completely free in the Western Cape as it is subsidized by the Western Cape Department of Agriculture. Using Eleaf’s Pi-mapping technology, FruitLook provides pixel maps at a resolution of 20 x 20m.

Fruitlook allows farmers to monitor the growth, water use and nitrogen of the blocks on their farms on a weekly basis. The tool’s field analysis functionality makes it possible to draw in graphs to monitor change over time and spatial maps to monitor changes in space. These graphs and spatial maps have proven to be especially useful in visually identifying issues in blocks. Here are a few case study examples of how FruitLook has assisted farmers in picking up problems in their blocks.

A farmer in Devon Valley noticed a constant wet spot in one of his blocks. The spot in question never seemed to dry out like the rest of the block. The block was due for renewal, so they removed the block after the 2016 season (Figure 1). After they removed the plant material, they dug up the wet spot to try and identify the problem. They kept digging all of 3.5 meters till they got to the drainage system. On closer inspection, they found that the drainage system was laid, but never linked up to the mainline. Hence why it drained into that spot. The drainage system was then linked up to the system that was originally installed in 1991. The blocked dried out more evenly after this, as can be seen with the 2016/2017 and 2017/2018 seasons (Figure 1).

In another example, a production manager picked up that a certain area (Figure 2A) in his block was showing significantly low biomass production. As the lines seen on that part of the block on the spatial map were quite straight, they suspected it might be an irrigation problem. It turns out the cause had been the sand filter is partially blocked, which caused a significant reduction in water pressure and delivery rate. After the filter was cleaned, the block returned to normal as can be seen by the next image that was 6 weeks later (Figure 2B).

The same block in the example above showed decreased growth again later that year (Figure 3). The production manager initially suspected that the decrease in growth was due to a spider mite infection this time, but on closer inspection, it was ruled out. Furthermore, it was determined that the irrigation system was also not the cause as the low growth area covered less than the irrigation block. What they did find, however, was that the affected area had been covered by a thick layer of fresh mulch from windbreaks they chopped down (Figure 3). The composting process required Nitrogen and water, which it had started taking from the surrounding trees. This had led to poor growth, water use, and general health of the section.

4. Small fruit on the one side of the block

A stone fruit producer in Ceres reported that the one side of this specific block of Rich Lady peaches was smaller than the other side. The block is divided into 2 irrigation blocks, but he manages them as one. The side that had the smaller fruit we will call RL 01 and the other side RL 02. The line where the smaller fruit was found is aligned with the irrigation blocks. The cultivar normally starts harvest the last week of December to the first week of January.

One of the prominent causes of smaller fruit is water stress at crucial stages of fruit development. From the graphs (Figure 4) and spatial maps (Figure 5), we can see that during the last weeks of October the RL 01 (which had the smaller fruit) experiences a higher level of plant water stress as portrayed by the ET Deficit. This is a crucial period that could have affected not only cell division, but also cell enlargement. Actions from this were to manage the block from next season as two separate blocks.

A pome fruit producer in Wolseley has a block of newly planted Celina pears in their first year of growth. FruitLook data of newly planted blocks normally have higher levels of variation due to the limited growth and canopy cover. These blocks are separated by a road, but the producer manages them as a unit. While studying the spatial data it was recommended that the producer split the 2 blocks from each other to see how large the variation is (Figure 6).

Upon investigation, it is recommended that the producer immediately starts managing the two blocks separately and completely independent of each other, as their soil type also differs quite significantly. If two blocks are managed as a whole you will either disadvantage one or both if you are trying to manage the average. A larger management block can hide variation of a block in the average value of the data as depicted in the graphs (Figure 7). In this case Block, 10.1’s variation was absorbed into the average which leads to 10.1 not performing optimally.