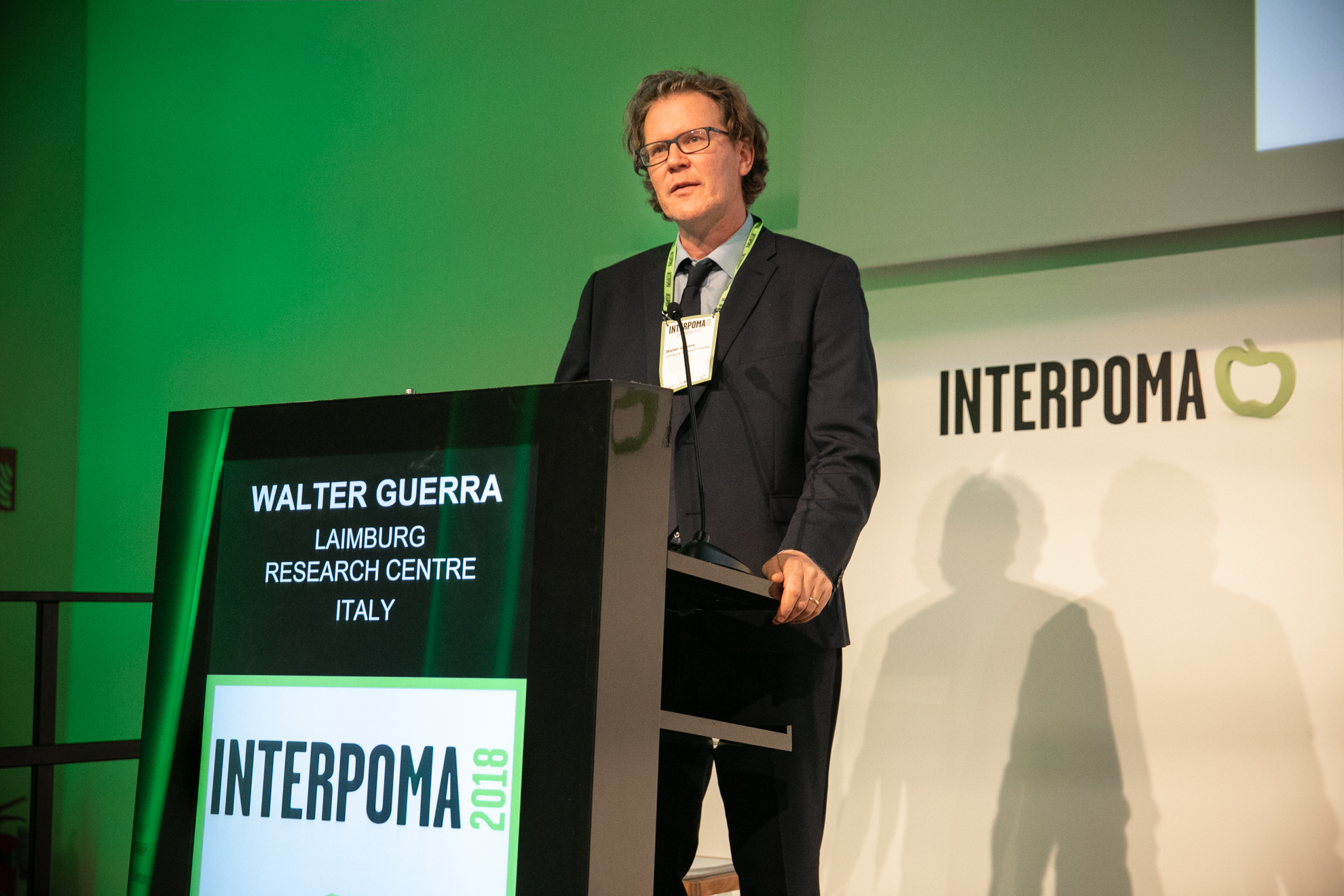 Bolzano, Italy – “Conscious decisions in all aspects of cultivation and production with the eye on the consumer of the future,” – this was the key message to delegates at Interpoma 2018.

This 11th apple trade which was held in Bolzano, Italy, is aptly named “the apple capital of Europe”, as every tenth apple that is grown in Europe, grows in South Tyrol. It is also home to 7 000 farming families who cultivate their own orchards. Interpoma is the biggest trade show of its kind and focuses on the cultivation, storage, and marketing of apples. This year there were 489 exhibitors from 24 countries and 20 000 professional visitors from around the world.

Hortgro’s Carmé Naudé attended and reports on a presentation by Walter Guerra from the Laimburg Agricultural Research Centre in Auer Italy who shared his ideas on global trends in variety innovation.

According to Guerra, the consumer wants a bigger and brighter Gala of which mutations exist as the Gala is able to “hold its own in the market”. Especially the red flesh varieties are becoming more popular and commercial entities are considering market entrance. He emphasized that rigorous quality assessment and testing should be done on new varieties to eliminate the potential risk of an under-par product entering the market too soon.

“Global drought conditions lead to water scarcity and stricter legislation and governing of its use. It has become tougher and more expensive for growers to comply with water-use standards. Planting varieties that are more adaptive to perform better in drier conditions should be of huge interest. Growers face greater competition for a potentially more expensive, yet dwelling supply of water in the future.

“It would be difficult for Spain to plant new varieties because of their extreme weather conditions and climate. In contrast, Switzerland is a playground for new varieties and with regards to club varieties, Switzerland would be considered a relatively closed market. China’s preference would be the Fuji because of its shelf life and aroma. They have already started planting Crisp pink and we will see more new varieties coming from China in the future like ‘Venus Gold’.”

According to Guerra, the Arctic apple is also one to watch because of its transgenic non-browning trait that is done by eliminating enxymatic browning through Polypenol oxidase (PPO) gene silencing. The varieties that have been sold in the USA from October 2017, under the Arctic apple brand is Golden Delicious, Granny Smith, and Fuji apples. Honeycrisp is a big seller with regards to consumer consumption. The EU is trying to expand and plant more of this variety. And the Italian markets distinguish themselves from the main competitors and will continue to do so in the future.

“As the markets are changing in variety preferences, you as grower will need to adapt and make a varietal change as well,” Guerra said. Among the varieties whose share in the global markets will increase until 2025, Guerra mentioned Golden Delicious, Gala, Fuji, Pink Lady, Jonagored, Honeycrisp, Jazz, Pinova, Red Jonaprince, Ambrosia and Kanzi.

The Southern hemisphere holds the largest share in production (around 60%). Exports to Europe have been declining and been in favour of Asian markets. Pink lady, Jazz, and Fuji are increasing in production because of the preference towards well-colored and sweet apples. There is also a growing interest in club varieties such as Ambrosia and Envy. For the Asian markets the brand is more important than whether it is a club variety or not, therefore it is not essential to cultivate a club variety to guarantee success.

Multi-resistant crosses of apple will be on the market within the next decade and rootstock choice is very important, concluded Guerra.

What the South African delegates had to say:

“Attention to detail! We have to go back to the individual tree as well as do the basics on time.”  – Keith Bradley, Fruitways.