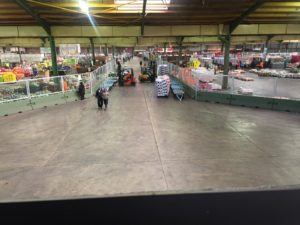 The Buffalo Market is being used as a case study to highlight one of the successes of the Project Rebirth process.  The market is committed to implementing the codes of best practice; it has the support of the municipality; it has a master plan for infrastructure upgrades and has a focus on hygiene, cleanliness, and food safety standards.  It also featured in a favourable article in Farmer’s Weekly.

Despite the efforts of Project Rebirth, there is still too much non-compliance with respect to infrastructure maintenance, safety, and security, consignment control, as well as food safety, hygiene and cleanliness.  These markets include Kimberly, Bloemfontein, Vereniging, Klerksdorp, and Welkom.  Potatoes South Africa (PSA) has embarked on a fact-finding / negotiating mission to assist these markets. This will now include the establishment of regional committees, consisting of market authorities, agents, buyers, and producers, as well as additional parties such as municipalities, APAC as required, to develop a master plan for the recovery of these markets.

Four of these markets have responded positively while being hamstrung by a variety of issues including lack of suitable personnel, lack of funding and indifference of municipalities.  A last ditch effort will be made to the Welkom municipality to rescue their market.

Proposal for a National Qualification on Fresh Produce Marketing

Various academic institutions were contacted to obtain information on the likelihood that they might be willing and able to facilitate a national qualification on fresh produce marketing.  It is likely that various modules would be allocated to institutions where core competencies existed.  The following skills & competencies should receive attention:

Codes of Best Practice for National Fresh Produce Markets pertains to market managers, market agents, producers, labour, and service providers. The pillars of these codes include:

The CoBP’s are awaiting Ministerial signature for gazetting.