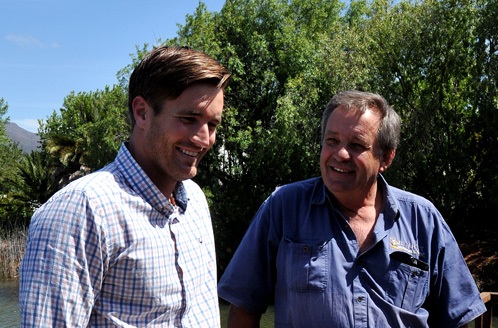 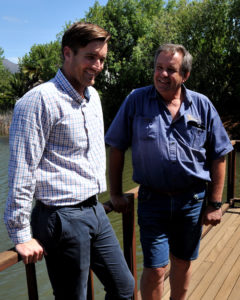 Those incredibly blue eyes are looking at me. Straight in the eye. Sorted, happy eyes, however, not icy eyes. I have just met Grant Smuts, the most senior member of the Smuts farming gang near Robertson.

“Granny Smuts started it all four generations ago. She and Grandpa relocated from the then Rhodesia to the Cape. Grandpa got a job at first as the farm manager on Vergelegen in Somerset-West. But Granny wanted their own place, so they bought the farm Lucerne from Herman Jonker. Here in Robertson. Grandpa then went to work as a rep for Spilhaus to provide income as a type of farm subsidy and Granny began farming. Small at first. They did well with guavas and quinces. They only had one son, Ivan, my dad who left school early to take over the farming.

“During my final year at Stellenbosch University, we bought the adjoining farm. At that stage, my brother Anton was still at university and after that needed to complete his military service. He would end up joining me and become part of the business. That’s how Smuts Brothers, the business began. And so we built it up. Two pieces of farmland became three, four eventually five. Kids as well. On my side, there are Juan-Ivan and Sean, as well as their sister Margarite who’s into fashion! Anton, on the other hand, had three daughters, no sons …

“Be that as it may, Juan-Ivan and Sean got more and more involved and the fact that Anton only had daughters, he and I managed to reach a settlement and the partnership was ended. Besides leasing the family farm to me and my sons, Anton serves on various directorships and boards.  He is also now the proud owner of a game farm in the Kimberley district. I am happy to say that Juan-Ivan and Sean are full-on involved. The new generation Smuts brothers,” Grant concluded.

Unfortunately, when I went over to meet the Smuts’, Sean was on the furthest farm on the other side of Bonnievale, but Juan-Ivan told me their story.

When the first generation – Granny Smuts – started out, it was mainly about cattle and poultry. Later on, when Grant’s father took over as the farmer he planted wine grapes and later experimented with peaches and then apricots. Diversification seemed to be the way to go. Grant still believes in it today. To grow you have to adapt. The business became bigger than just producing.

While Grant – and at that stage his brother Anton – was turning a humble family farm into an ever-growing produce business, Juan-Ivan and Sean were doing what teenage boys were supposed to do. They were having a royal time at school, doing well in academics and sport. The farm, at that stage, was a base from where it all happened. But unlike the norm with farm kids, they were never forced into farming or farm activities during holidays. 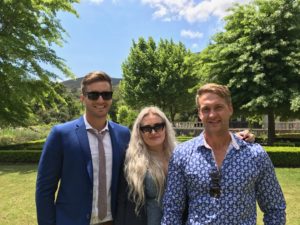 Pictured: Juan-Ivan (left) and Sean, with their sister Margarite.

“I really have to respect my dad for that,” Juan-Ivan said. Come holiday time, they were always free to do whatever they fancied. Within limits, of course, but they never had to fall in with the team. Even though farming activities were peaking during Decembers, they were entitled to have their holiday breaks. Grant never forced them into falling in at daybreak every day. If they wanted to sleep late, they could. If they felt like going with mates –  or their mother – to the seaside, he blessed it. If they wanted to help on the farm, he welcomed them. They were never forced into farming but eventually chose to be involved. Unpressured. Juan-Ivan studied finance and commerce while Sean did agricultural economics at Stellenbosch.

“After I graduated, I decided to spread my wings at first,” Juan-Ivan explained. “I always somehow knew I will come back to the farm and become part of the legacy, but I had to go. Go and do my own thing. Dad blessed it. Yet again, I praise him for it.”

He ended up working on a yacht on the French Riviera. At the end of his first year, he did so well, he was promoted to a bigger and better position. He went home for Christmas before taking on this new responsibility, but once back on the farm, he knew this was home. This was his future. He never went back to the Riviera.

In very much the same style, Sean left the nest after university for a gap where he ended up in America. California to be exact. Other than Juan-Ivan though, his gap year was related more closely to his future. He worked on a (bigger is better in America, remember) stone fruit farm. “Stealing with his eyes,” Juan-Ivan said, laughing. “I guess the difference between us is that he basically always knew he was going to qualify himself in farming, where I sort of knew I wanted to be part of the business of farming, but not as a farmer as such. Focusing on the financial side seemed the way to go. Six years ago, the business was farming. Today the farming is a business.” As it stands today, there is the main company, Lucerne Agri Investments, encapsulating a marketing company, a packaging company, and the farming business. In total, they are farming and managing five different properties between Robertson and Bonnievale.

The name of the business has been Smuts Brothers Agri for a long time. The original Brothers part of the name referred to Grant and Anton, the third generation managing the farming. Today one brother of that generation is no longer involved. But brothers Juan-Ivan and Sean is the next generation. Each focusing on his own expertise. Smuts Brothers Agri (Pty) Ltd, the business is alive, well and doing better than ever. Encapsulated in the hands of the brothers Smuts. And they are not there, doing it because Dad ever said they have to. They are there doing it because farming runs in their veins. They wouldn’t change it for the world.