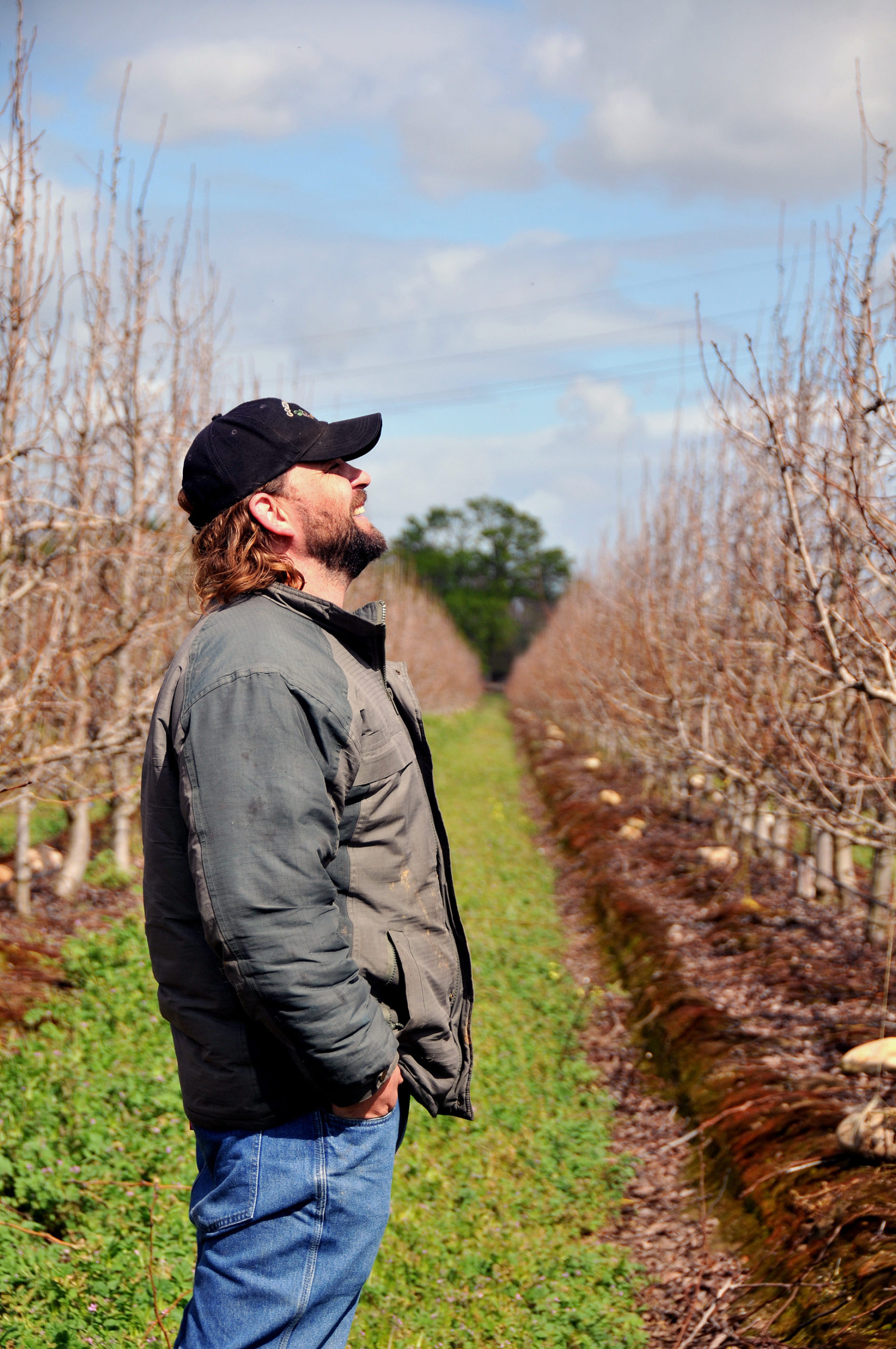 Over the next couple of months we will introduce you to some of our young farmers in the deciduous fruit industry. This ‘next generation’ is passionate about farming, and ready and willing to take on any challenge that South African fruit growers might have to face.

Meet our first young fruit producer Freddie Kirsten who farms with his dad, Kalie, on Goedvertrouw, outside Stellenbosch, where they cultivate pears.

Thirty odd years ago Kalie Kirsten acquired the farm Goedvertrouw just outside Stellenbosch. Over the years he worked hard. Extremely hard. That’s the only way you make it happen, as any successful farmer will tell you.

During the same 30 odd years Kalie and his wife Miranda created a farm, but also a happy farmhouse full of kids. Freddie is the oldest and also the only son, his sisters are Adri and Marni. From a very young age, Freddie had to pull his weight on the farm. Sometimes this didn’t work too well for him. Think about it, over the festive season his mates are all out at Plettenberg Bay, surfing at Jeffrey’s or hanging out in Cape Town while Freddie is tending the pear crop. Merry Christmas and a ho-ho-ho, he thought.

When Freddie successfully completed his schooling, farming was not on his mind. He was thinking about other things, like a gap year before university, and getting out into the big wide world. No tending crops at Christmas time for him. He was going to wing it. After all, life is an adventure, live it!

Freddie is a non-conformist and while all his buddies planning a gap year chose England, he wanted out. Australia and the Outback was his bucket list place. At the time, the only way he could get down under was to go on an agricultural exchange scheme with World Agricultural Exchange, something he read about in his dad’s Landbouweekblad. Well, off he went and his first stop was an organic avocado pear farm somewhere south of Perth.

Kalie and Freddie are cut from the same cloth – headstrong go-getters, passionate people. They don’t mince their words. But deep down they are softies. Kalie knew that Freddie just wanted out, but he never said anything. He had the wisdom of a father, and knew Freddie just had to go and find himself.

Amongst all of this, Freddie came out with a curved ball. He actually wanted to become a tour operator. Kalie’s advice to his son was that he must solidify a career first, to pay his way for adventures. Being an adventure tour operator sounds romantic, he said to Freddie, until the day you end up under a tree, wondering why your bus is empty.

Be that as it may, Freddie arrived on the avocado farm and got going. Two weeks down the line he phoned home.

“Awesome, Dad! I really enjoy myself here. But more importantly, I’ve made a discovery.”

“And that is?” dreading that it might be Freddie wanting to run adventure tours to Australia.

“I want to be a farmer. I want to come back to the farm.”

“Aha,” Kalie reacted, “but before you can farm, you need to go to university.”

“Of course! I’ll do my BSc Agriculture first yes!”

“No, you’ll do a BComm. Let them teach you about finances, whatever you need to know about farming this farm, I’ll teach you.”

Freddie moved on from the avocado farm to a pear, apricot and prune farm before spending his last six months on a cattle ranch in the Outback. Somewhere along the line Kalie and Miranda came to visit him. At that stage his hair and beard was getting quite wild and his bangles were multiplying. After the visit, saying goodbye at the airport Kalie looked long and hard at Freddie.

“Come back home, but do me a favour … Don’t change the way you look. You’ve got identity.”

Enter varsity. Freddie enrolled for his BComm and became a student. However, one year was enough for him. He begged his dad to set him free. He yearned to be on the farm. After long consideration, Kalie gave in.

Freddie was given a pair of tall boots and a spade. He was just one of the workers tending the Packhams, not the boss’ son. Two years went by before he was allowed as a pinion on the waterman’s bike to learn irrigation. He was tested, but a keen learner. Freddie was a natural farmer and every now and again, he would challenge the system, the foreman or even his father. So much so that after three years, Kalie sacked him. Told him to take his stuff and find another life.

Fortunately, when the tempers died down, things didn’t go completely pear-shaped. Kalie didn’t want to loose him. At that stage Sam Shoco had been the farm manager for 30 odd years and was still going strong. And Kalie was still active on the farm. Freddie realised that he was the odd one out, but that in due time, he would become the farmer.

Today, Freddie does the day-to-day running of the farm, but Kalie is still the Don. While Miranda and Freddie’s wife, Carrie, do the auditing and finances. In due time Sam Shoco will retire, and Freddie knows he will have to appoint the new farm manager. The next generation is about to take the reigns. Things are looking good for Goedvertrouw and its Packhams, Freddie reckons.

“Remember what you said to me about travelling and having adventures, Dad?” he asked Kalie.

“That I first have to solidify a career and have the funds to do it?”

“Well, we’re off to Greece in a few weeks,” Freddie concluded.

“That’s excellent news. I’m off to explore Uzbekistan next year.”