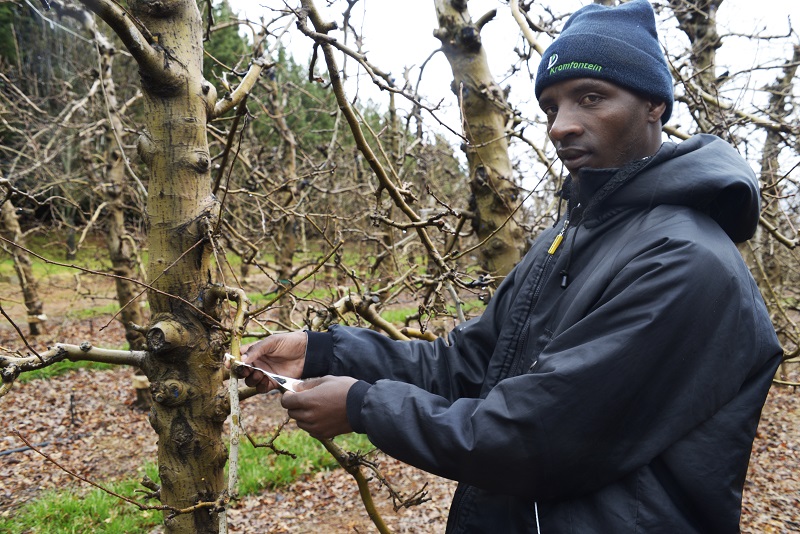 Sivuyile Panya from Kromfontein in the Koue Bokkeveld received the merit award for General Agricultural Worker of the Year for his exceptional work ethic and orchard skills. The 31-year old Panya, originally from the Eastern Cape, started as a general agricultural worker on Kromfontein in 2007. Over the years his incredible work ethic and motivation have impressed his manager, and today Panya is a team leader and section foreman. According to Johan van Schalkwyk, Kromfontein’s farm manager, Panya is an all-round, outstanding orchardist. “He was also Kromfontein’s Fruit Picker of the Year with a phenomenal 9 296 picking bags to his credit, despite the drought.” Panya also out-performed his co-workers when it came to pruning. He pruned on average between 55 and 60 trees a day. “That is an incredible achievement when the environmental terrain in which he works is taken into account.  Panya stands out in everything that he does and does everything with a smile,” says Van Schalkwyk.

Asked what his recipe for success is, Panya humbly says, “When I am in the orchard I focus. When I pick fruit, I only focus on the fruit. When I prune, I only focus on the branches.” He believes in discipline and teamwork. “When you work in the orchard you do your own job, but you also have to work as a team.” He doesn’t have a preference for a specific fruit type. “It doesn’t matter whether it is a peach tree or an apple tree, as long as it is a fruit tree!”