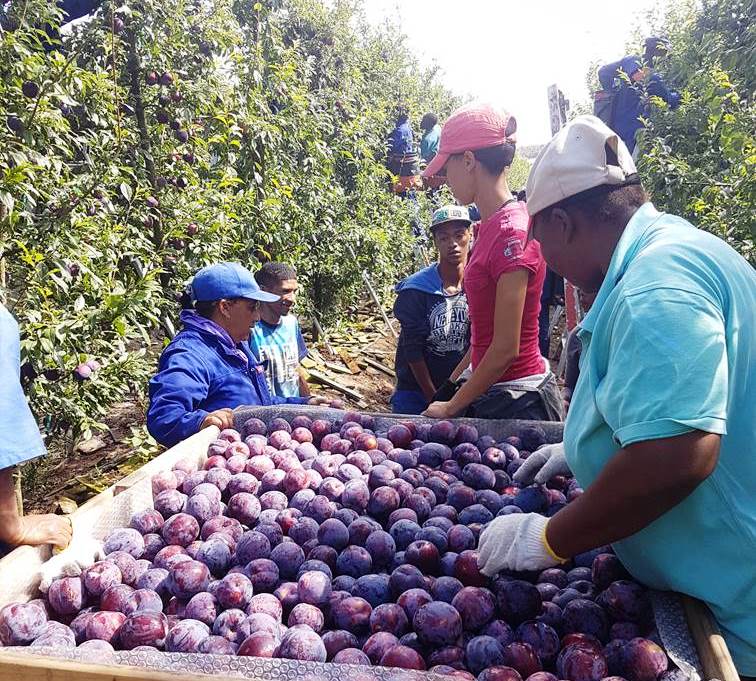 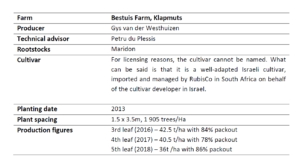 Faced with a challenging environment and difficult climate conditions, the team on Bestuis Farm in Klapmuts had their work cut out for them. Despite difficult circumstances such as limited water and subpar soil compared to the rest of the valley, this plum orchard still delivered a consistently good tonnage over the past three seasons.

“The orchard may not be breaking records, but on less than substandard soil and in seasons with poor winter chill and summers with very little water, it delivered above-average harvests,” says Bestuis producer Gys Van Der Westhuizen.

Since its first harvest in 2016, this plum orchard has delivered about 5000 cartons plus per hectare, annually. From its 3rd leaf up to its 5th leaf, a cumulative yield of 119 tonnes per ha has been harvested, delivering an average of 38.7 tonnes per ha over the three seasons. For the next season, they want to improve these numbers even further with the aim of 40 tonnes per ha. “We try to take care of this orchard as best as possible to ensure consistently good harvests for as long as possible.”

Here is what Van Der Westhuizen and the team have learnt so far.

Along with the rest of the industry, Bestuis Farm’s orchards also experienced a challenging climate and drought conditions. Luckily, their choice of cultivar is genetically more resistant to difficult climate conditions thrown their way in recent years. According to Van Der Westhuizen, this is the single biggest factor that contributes to the orchard’s success.

In general, Bestuis Farm uses micro-irrigation, with the added advantage that it slightly cools down the environment when it is very hot. They also use pulse irrigation in heatwave conditions. “In a situation where there was very little water available, we had to adjust our irrigation schedule,” says Van Der Westhuizen. “We applied two or three short one-hour irrigations weekly, followed by a single three and a half hour irrigation.”

Organic materials like off-cuts and wood chips on their tree row ridges help keep soil temperatures cool during severe heat. A large number of wooden off-cuts were also placed under the trees right before the drought. Van Der Westhuizen believes the placement of these off-cuts made a huge difference in recent drought years.

“With delicate and correct techniques he achieved much more than many of his co-producers on better sites,” says technical advisor Petru Du Plessis about Van Der Westhuizen’s efforts. “His success lies in the fact that he produces large harvests by producing large fruit, and not by producing as many fruit.”

According to Van Der Westhuizen, it was a ‘lucky accident’ that led to this successful approach. Poor cross-pollination occurred, since the flowering of the cross-pollinator and the main cultivar does not always overlap very well. While one might think that there is hopelessly too few fruit, fruit size was great – an average of 75% AAs and greater.

“A light set is certainly a risk,” Van Der Westhuizen admits. “But I believe if you want to reap big fruits, you have to start thinning very early or have a light set from the start.”

In terms of overcoming certain challenges, they included three strategies for success:

The team tries to maintain a three-dimensional tree shape. Side branches are bent into the tractor row to intercept maximum sunlight. Even with very short side shoots, which will accommodate a picking platform, they still try to beat a two-dimensional flat training system in terms of volume. There are simply more bearing positions for fruit, says Van Der Westhuizen.

The farm fertilizes through its irrigation water. They keep a close eye on the orchard and adapts irrigation and fertilization according to conditions. Van Der Westhuizen believes that no fertilizer recommendation is cast in stone. He also asks for advice and constantly consults with his technical adviser and other farmers and experts.

Van Der Westhuizen gives his technical advisor “all the credit” for rest breaking decisions. “[Petru] is a rest breaking expert on plums. We follow his advice as far as rest breaking is concerned.” A tree that is not properly awake does not have enough leaves or breaks and cannot produce enough photosynthetic products to give optimum fruit size.