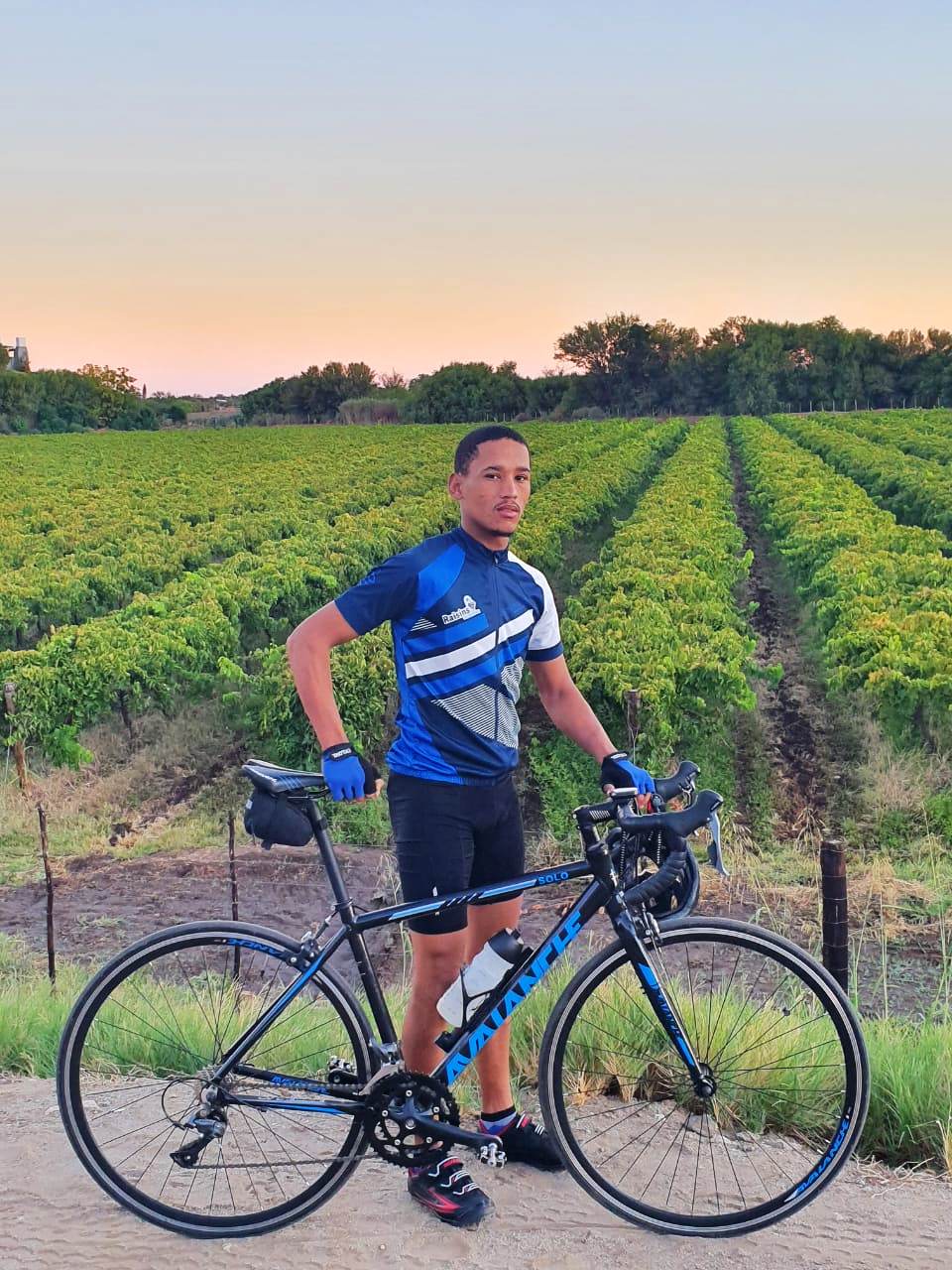 With legs of steel and true grit, a 21-year old agri worker from Hierbegin Farm in the Northern Cape made his dream come true by competing in the 2019 Cape Town Cycle Tour.

Gino-Louw Green was born in Keimoes and at times did not have the easiest childhood. At the age of two, his family moved to Malmesbury in the Western Cape.

When he reached the fourth grade, Gino was the star of his rugby team at Swartland Primary. Those legs that years later would cycle the 109km around the Cape Peninsula, were already fast – very fast. However, due to circumstances, they had to move back to Keimoes in the middle of his school year. The family stayed with Gino’s uncle. Here the young boy’s love for cycling began.

Watching his uncle, a passionate cyclist, dressed in his cycling gear, cleaning his bicycle with great care sparked Gino’s interest in the sport. At the age of 11, he asked his uncle if he could ride. No, his uncle said, but one day when he was big and all grown-up, then he could join.

So, Gino waited patiently. In 2013, he finished his high school career at Oranjezicht High School. That same year, Gino’s uncle cycled the Cape Town Cycle Tour, or the ‘Argus’ as it is known, for the first time. Seeing his uncle’s face in the newspaper, was the final motivational push he needed to turn his cycling dreams into a reality. With everything in him, Gino wanted to follow in these inspirational tracks.

After school, he started working as a general worker at Hierbegin Farm in Keimoes. Selling him his first bicycle, a blue Silverback, his uncle gave Gino the start he needed. Every Sunday after that the two of them cycled the Kenhardt road. Getting fit, building up stamina and learning the tricks of the trade, gave Gino the confidence to enter his first competition – a 30km mountain biking race in Upington.

For Gino, it was a nerve-racking experience. Not only was it the first time he competed with so many people, but he was also the only one without the appropriate cycling clothes. When the people laughing at him upset him, his uncle told him to not let it get to him – to just stay focused, do his best and ride his race.  He ended up in fourth place. Now no-one was laughing anymore.

That day, someone gave him brand new Ferguson cycling clothes and told him to never stop cycling. The fact that he was talented, was undeniable. In 2015 and 2016, Gino took part in the Kalahari Kuierfees mountain biking competition and fared brilliantly once again.

He kept training. This year his dedication, consistency, and resilience paid off when one of his dreams came true: taking part in the Cape Town Cycle Tour. InnofruitSA (Pty) Ltd, Raisins SA, and Hierbegin Farm sponsored Gino. He received a new Avalanche Solo bicycle, new gear, and clothing. The support he received made it possible to reach this dream of his, and for that, says Gino, he is extremely grateful. Ending off 342st in his age group, and 13270st in the total of 23034 cyclists, his time of 05:02:49 seconds is a major achievement. For Gino, it was a memorable and exciting experience to compete against the best cyclists in the world.

And where to from here? Those iron legs are far from tired, it seems. The new dream is to take part in the Tour De France, says Gino, and he will do whatever it takes to get there one day. For now, the Telkom 947 Cycling Challenge in Johannesburg on 17 November 2019 is next on the list, provided he receive a sponsorship.