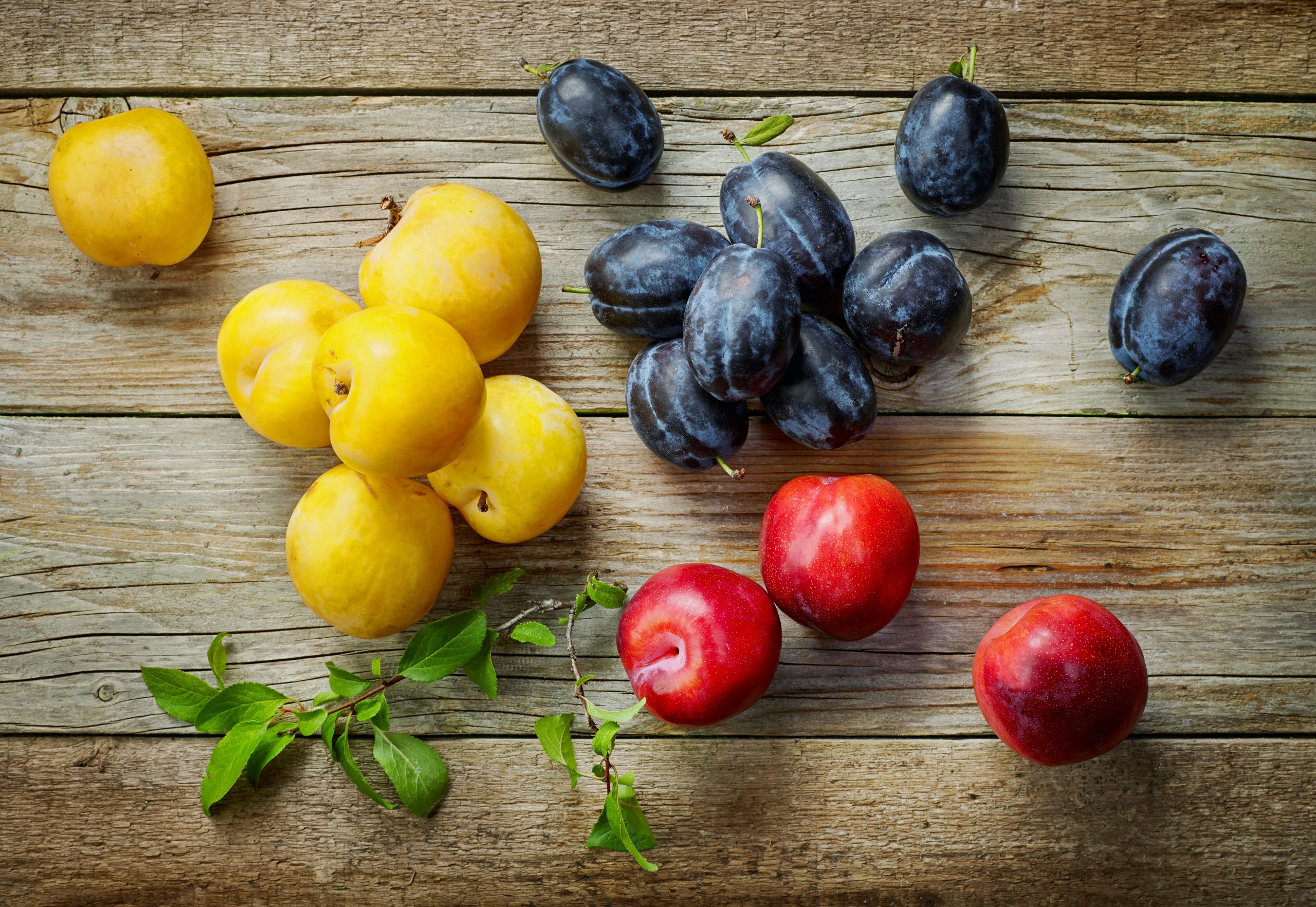 Over the past 5 years, the most significant growth in bearing area and area planted of stone fruit types arose from expansion in plum production. Production was set to recover from the drought of 2017 and 2018 and from the heat waves that adversely affected fruit set in 2019, with late-season plums being hit by intense heat during blooming. Despite the advent of COVID-19, the weaker Rand assisted plum returns to farmers with regards to exports. The projections for plum production area and volume are positive over the ten-year outlook period, with volume growth driven by higher density plantings and later season cultivars that deliver higher yields. Over the past 5 years, the value of plum production has declined, however, this trend is expected to make a solid change in direction with a growth in value which is expected to be quite consistent. A projected weakening of the Rand translating into a nominal price increase is the pivotal factor. Little real price movement is expected over the outlook period. Given these conditions, the industry expressed its need to understand the potential impact of having yet another exogenous shock such as the heatwave during bloom scenario. What if a price shock from an increase in claims occurs? What if the purchasing power of the end-consumer remains unchanged for the coming season, considering that almost three-quarters of plum exports are destined for the EU and UK markets alone? How would a change in the size distribution of plums produced affect farm-level profitability? Would a combination of some of these scenarios be manageable for farmers? These are the questions considered by the Bureau for Food and Agricultural Policy (BFAP) in a study that focuses on understanding the scope of plum production profitability under different scenarios for the 2020/2021 and 2021/2022 seasons.

The study considers five cultivar categories individually for certain elements of the study’s output: Early red, midseason red, late red, yellow and black cultivars. This approach was taken because different cultivar categories have their own characteristics with which to impact the simulations and this categorisation would also yield useful results for further use in decision-making. The core aim of the output was to answer questions revolving around the break-even point per cultivar category by considering the mean output and variance around the mean output from past seasons and different levels of plausible costing and yield levels in order to provide a mean output projection[1] for 2020 – 2025 and industry level output (weighted average of cultivar categories) for each of the five categories considered. To deliver these outputs, input considerations included per cultivar information on volume, value and pack-out percentages and industry information on the total area of plum production in South Africa. These inputs were fed into the BFAP farm-level analytics model and sector-level projection model, which also considers the macro-economic environment. A discussion between the research teams from Hortgro and BFAP considered various uncertainties, which informed the specification of various alternative future outcomes. The farm-level model[2] was then used to quantify the different scenario outcomes.

To deliver output with practical informative capabilities the analyses were done on two output levels: 1) a scenario-based stochastic simulation at farm-level that considers macro-economic factors, and 2) a sensitivity analysis of the effect of different production costs, Rand per carton and yield scenarios on the number of export cartons needed to break even for each of the different cultivar categories. These outputs serve to inform the industry about the farm-level risk-profile and to assist decision-making at farm level. It considers conditions of a typical[3] farm-environment under the baseline (“business as usual”), which is based on a plausible set of macro-economic assumptions. Four key output variables are identified to simulate stochastically within that specific farm-environment. The stochastic component of the simulations takes historic volatility around the mean values of each of the key variables into account. This volatility is then imposed upon the mean projections[4] of those variables. The result is an output that gives the probability and extent of future volatility around the mean projection of the four variables within a bandwidth also given by the historic volatility. This output is then fed into the baseline farm-level model and run for five hundred iterations of different possible combinations of said variables to deliver the baseline profitability measures. This procedure is repeated for each of the scenarios to compare the scenario outputs against the baseline output to quantify the effect of the different scenarios.

In the period of 2018 – 2020, sub-par yields were observed for plums. A yield increase of 20% was deemed probable for the baseline projections over the period of 2020-2025. Under these conditions the probability of obtaining a negative EBITA in the 2020/2021 season was negligible, with the majority of producers expected to realise positive returns, barring major exogenous shocks (Baseline mean EBITA % in Figure 1). 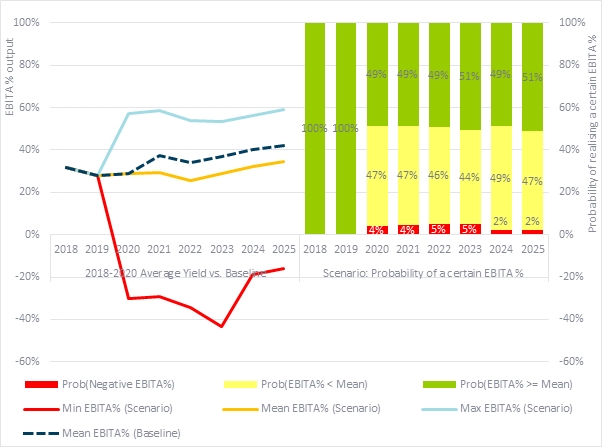 The four key output variables identified to simulate stochastically[5] are yield, export price, local price and pack-out percentage. Five scenarios were simulated. The scenario where the projection was based on the continuation of the sub-par yields of 2018 – 2020 delivered the most negative impact on the EBITA margin. Therefore, amongst all the different scenarios, which accounted for a drop in price, a lowering of demand, a combination of a price and demand slump, and a change in size distribution, the biggest profitability and risk factor remains yield. This implies that vying for high yields more than other factors could be a good long-term strategy to remain profitable. This also indicates that, in a situation where it becomes clear that high yields will not be attainable, tactics to buffer the impact on profitability could include a combination of a change in production methods that will result in lower production costs, good pack-out percentages and the right fruit size to be able to deliver in the markets that provide the most favourable prices. The scenario outputs also show that despite the downwards deviation from the baseline mean caused by a combination of negative exogenous impacts being larger than the upwards deviation caused by a combination of positive impacts, the probability of realising a negative EBITA remains low in all scenarios.

The sensitivity analysis considers higher-cost & lower-yield conditions to compute the price per carton required to break-even (shown in Table 1). This table considers a weighted average from the different plum categories identified, and the output differs considerably between these categories, e.g. higher yields and higher production costs on late cultivars, and different prices linked to supply and demand for certain products depending on the time they enter the market.

It is imperative to consider the results of this study within the context that it was developed. Different farms will yield different results when subjected to the same study. The key takeaway here is therefore the direction the different scenarios could steer the profitability of a farming enterprise. It serves decision-makers to consider which strategy to take to achieve break-even production levels. Decision-making is in essence a subjective matter, as is risk preference. Given the environment a business operates in, the decision could be taken either to focus on higher pack-out percentages or to reduce costs, or both. The answer may well be in the quantification of one’s own strategy. Another perspective the study gives is that even under adverse alternative (and possible) conditions, the opportunities to realise profits outweigh the probability of negative returns. This reflects a resilient local plum industry.

[3] A “typical” production unit is determined through a process of objective measuring and subjective reasoning to best represent a farm for a certain region.

[4] The mean projections originate from the sector-level projection model.

[5]The other components impacting farm-level profitability such as production costs and macro-economic factors are captured deterministically.