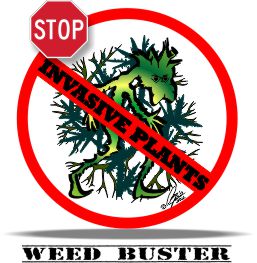 Every year an estimated 1.44 billion m3 of water is lost to invasive plants in South Africa. To put it in perspective, this amount of water loss is enough to provide 3.38 million households with four inhabitants with water for a year or to irrigate 120 000 hectares of cropland. South Africa is a water scarce country and the current drought in the Western Cape put the sustainable use of water in the spotlight again. SIZA’s Henko Vlok reports.

What are invasive alien plants:

With water being considered a key enabler for future economic growth and environmental sustainability, the control of invasive alien plants (IAP’s) became an important aspect in the protection of our environment and water resources. The Department of Environmental Affairs defines invasive alien plants as plant species that are exotic, non-indigenous or non-native to an ecosystem.

Due to the lack of natural enemies and the resistance to local diseases, these plants tend to spread aggressively, which then threatens biodiversity, reduce water availability and increase the risk and intensity of wildfires. The Alien and Invasive Species Regulations of the National Environmental Management: Biodiversity Act 10 of 2004 (NEMBA) regulates all invasive organisms in South Africa and categorizes invasive plant species into four different categories: Category 1a & 1b, Category 2 and Category 3.  These categories of IAP’s need to be controlled or removed from areas where they may cause harm to the environment or where they are prohibited. In South Africa there is a total of 383 invasive plant species that must be controlled and these species are listed in the NEMBA Alien and Invasive Species list of 2016. Some of the most threatening and most popular IAP’s in South Africa is the Rooikrans, Black Wattle, and Port Jackson trees (CapeNature, 2016).

Invasive alien plants are a significant problem in South Africa as they have negative impacts on the environment by decreasing both surface water runoff and groundwater recharge, causing direct habitat destruction, intensify flooding, and increasing the risk and intensity of wildfires (Görgens and Van Wilgen, 2004). With invasive plants having high evaporation rates, they often use more water than surrounding indigenous plants, which has a direct impact on stream flows and groundwater reserves. In South Africa, an estimate of 1.44 billion m3 of water is lost to invasive plants annually. To put it in perspective, this amount of water loss is enough to provide 3.38 million households with four inhabitants with water for a year or to irrigate 120 000 hectares of cropland (WWF, 2016).

Due to invasive alien plants being of greater height and root depth than surrounding indigenous plants, they increase the amount of biomass in the surrounding environment by up to 300% (Versveld and Van Wilgen, 1986). With an increase in fuel loads, wildfires become more intense, damaging the vegetation and soil and lead to excessive erosion. As wildfires become more intense and burning at higher temperatures, water-repellent layers are being generated in the soil, leading to an increase in soil erosion (Smith et al., 2011). Soil erosion then increases sediment loads in water, affecting the water quality. In addition, invasive alien plants reduce the capacity of rangelands to support livestock and wildlife, and significantly reduce biodiversity (Richardson and Van Wilgen 2004). The impact, however, goes further than harming just the environment, as an estimate of R600 million is spend annually to clear over 10 million hectares of land in South Africa (Department of Environmental Affairs, 2018).

According to the Biodiversity Act 10 of 2004, it is stated that landowners are under legal obligation to control invasive alien plants occurring on their properties. Landowners must then identify all invasive alien plants on their property and make use of the correct methods to control or remove these plants. The control methods of alien invasive plants can be broadly classified into three categories: mechanical, chemical or biological. Mechanical control methods involve the physical destruction or total removal of plants (e.g. felling, strip-barking; ring-barking, hand-pulling and mowing); chemical control of invasive alien plants include the foliar spraying of herbicides to kill targeted plants and biological control or biocontrol methods involves the release of natural enemies that will reduce plant health and reduce population vigour to a level comparable to that of the natural vegetation. It is often necessary to use a combination of at least two of these methods to control or remove invasive alien plants (State of the World Plants, 2017). With repeated follow-up, mechanical and chemical control methods tend to be short-term activities suitable for smaller plant invasions that can result in the complete removal of the target species. After the implementation of your methods, it is important to evaluate the effectiveness of your methods and to monitor the cleared areas on a regular basis to identify emergent seedlings and to remove those immediately.

Overall, the management of invasive alien plants in South Africa is of utmost importance as it can increase runoff, improve water quality, minimize fire risk and prevent the extinction of our indigenous vegetation.

Department of Environmental Affairs. (2018). [online] Available at: https://www.environment.gov.za/projectsprogrammes/wfw/research#stats [Accessed 3 May 2018].

State of the World Plants. (2017). Invasive Plants. [online] Available at: https://stateoftheworldsplants.com/2017/invasive-plants.html [Accessed 3 May 2018].