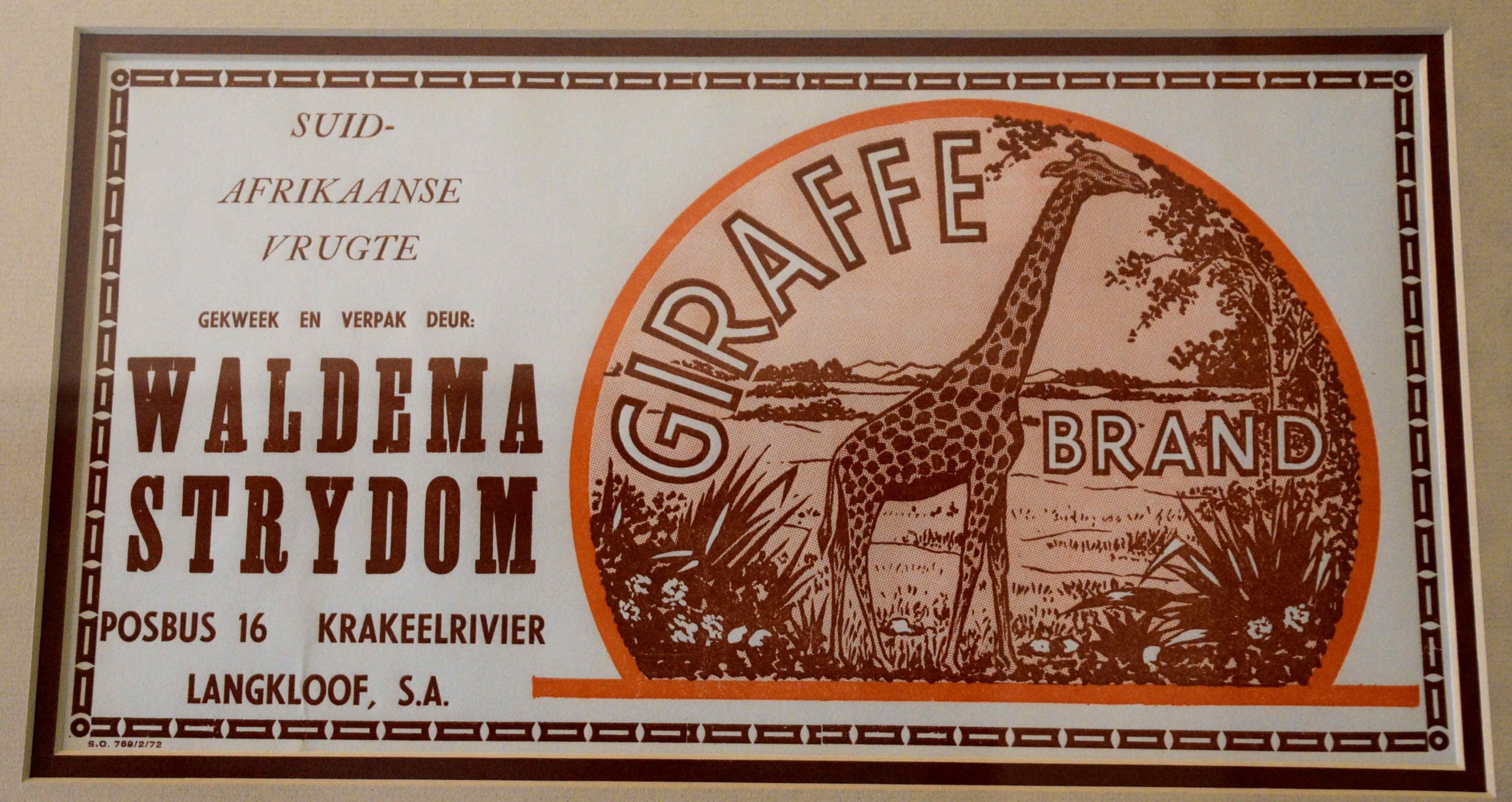 The first Strydom settled in Krakeel River in the Langkloof in 1770. He had 10 sons and divided his piece of land into 10 sections – one for each son. Today, there are quite a lot of Strydom’s in Krakeel River. If you were to open the telephone book, half the names listed under Krakeel River are Strydoms. As a matter of fact, the Strydoms are possibly the largest extended family in Krakeel River and have a great relationship with the community. There are so many Strydoms that they often joke that any local rugby tournament should feature a Strydom team against the rest of the community! Louise Brodie spoke to two intrepid descendants, Dewald and Riaan Strydom, aka. ‘Dewald Giraffe’ and ‘Riaan Rugby’. 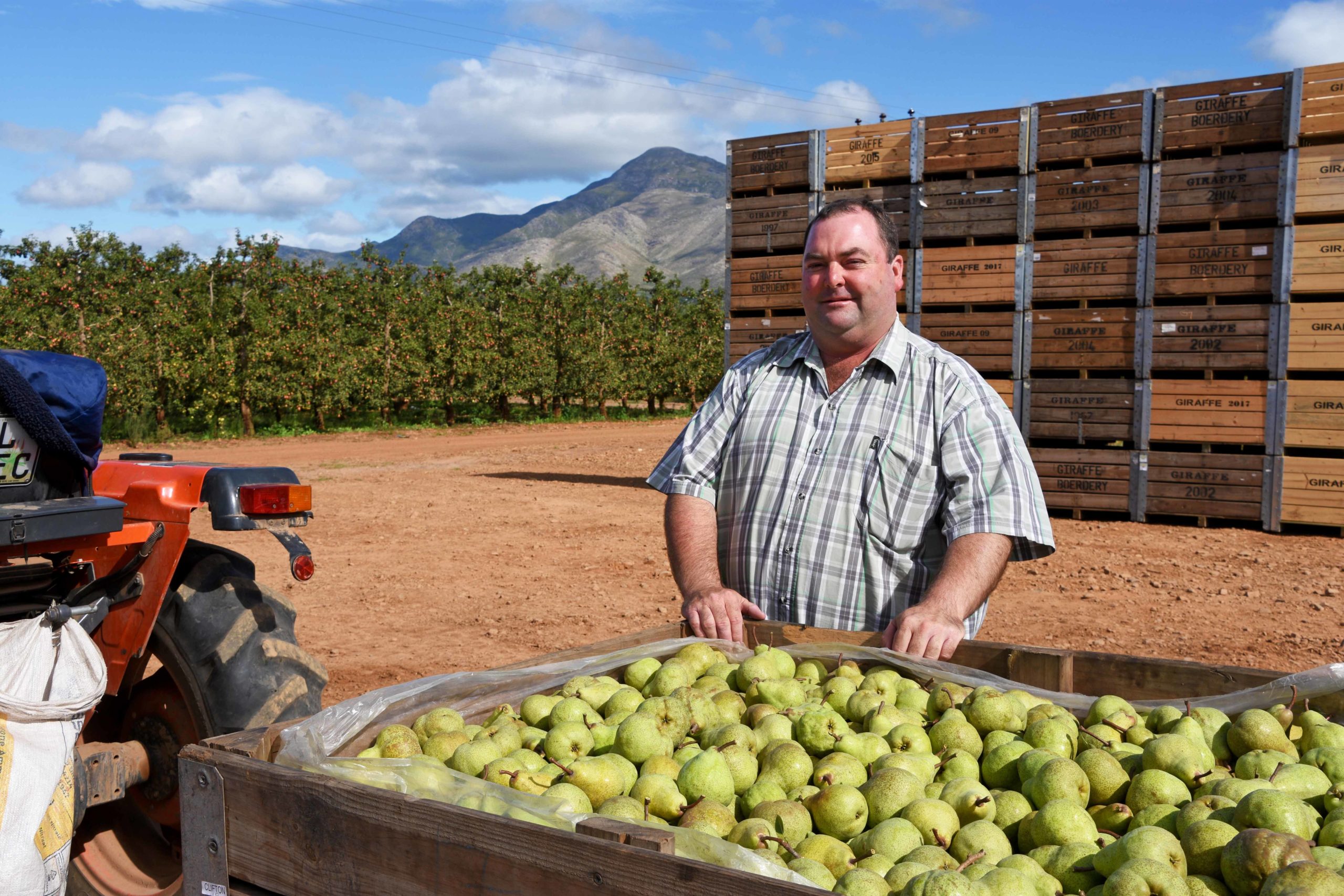 You might wonder why a fruit farmer would brand his product in such a unique way, Giraffe Farms? But for Dewald Strydom’s grandfather, no other animal in the Kruger Park was more stately and impressive than the tallest living terrestrial mammal, namely the giraffe.

At that time many fruit farms in the industry, and particularly in the Langkloof, developed their own unique brands. “My grandfather decided on the Giraffe Brand and since then our farming business has been called Giraffe Farms.” The distinctive Giraffe Brand farm boards are well-known landmarks in the area.

The 37-year old Dewald grew up in Krakeel River and always knew farming was for him. “My grandfather farmed here on around 10 to 15 hectares, but over the last fifteen years, the farm’s production doubled. Today, our farming operation is 330ha of orchards, consisting of 50% apples, 45% pears and 5% yellow peaches.”

The day that Dewald finished matric he joined the family farming business. “For ten years I worked alongside my father. He started to develop problems with his eyes and in 2004 I took over my father’s responsibilities. Soon after that, he lost his eyesight. It was a difficult time for him. He handed over the business to me and had no problem with the way I ran things. He trusted me. Sadly he has since passed away and I am now the sole owner of Giraffe Farms, says Dewald.

His mother still lives on the farm but is not involved in the business.  His two sisters live in Port Elizabeth where his mother visits them and her grandchildren as often as possible.

“My father bought each of my sisters a house so we are all very grateful to him for his providence. My wife Theretia and I have two sons, aged nine and eleven, and my eldest son is particularly keen on farming so we will see about that in the future.”

And the future at Giraffe Farms is looking good. Dewald has renewed a good number of orchards and expanded onto previously unused ground. “We can’t really grow much bigger as we do not have enough water available for further expansions.

He explains that the region has had several years of good productions and returns prior to the last two years of drought. “During the drought, we sank a number of new boreholes. The recent rains have really blessed us with good water and in addition, we are also still utilising some or our boreholes.”

A considerably high percentage of the orchards at Giraffe Farms are covered by nets and Dewald explains that they really pioneered the use of nets in the region. “We were the some of the first farmers in the Langkloof to put up nets. Our approach going forward is to plant fewer hectares at a time but with netting. Initially, we installed the nets to prevent sunburn on the fruit but we soon realised how invaluable they are in the event of hail. With nets, we use 30% less water for irrigation. In order to encourage bees in the orchards to assist with the necessary pollination process, we leave gaps in the nets between rows to allow bees access into the orchards.”

“Our profit margins are shrinking due to the unfavourable exchange rates in our markets. At the same time we are farming ‘smarter’ and through incremental adjustments and more careful monitoring, we are able to use fewer resources such as chemicals, water, and electricity. We have also been able to increase our yields through improved plant material (improved new varieties) and production methods.  We market our fruit through Tru-Cape, Core Fruit, and Safpro.

“I will persevere regardless of the challenges. I love living in Krakeel River and am positive about the future of our industry. The apples and pears have always provided a good income for us and I have confidence that this will continue to be the case in the future.”

Riaan Strydom farms the Rugby Brand Farms with his older brother Mario and his cousin Wynne. Over the past few years he and Mario have diversified and grew their business into several other successful business divisions in the area thereby spreading the risk for their farming operation. This enterprising approach saw Riaan voted as a finalist in the Eastern Cape Farmer of the year in 2017.

Riaan has a very practical, hands-on approach when it comes to farming. “Farming is all I have ever known and I could not see myself doing or wanting to do anything else.  I am now 37 and represent the third generation in our farming business.”

Riaan was schooled in Joubertina at McLachlan High School and afterward attended Saasveld College at George where he completed a National Diploma in Agricultural management. He joined the family farming business in 2002.

Riaan is married to Willet and is the proud father of a son (4) and a daughter (8). Willet is not involved in the farming business but our kids love to travel around with me on the farm and see the various production practices.

When Riaan joined the business they were farming on 130ha and harvesting 3 500 bins per year. Sixteen years later, the figures have changed – farming on 120ha and producing 11 000 bins. “The increase on largely the same number of hectares is due to increased production methods and improved new varieties,” says Riaan. “We have implemented considerable orchard renewals during the past few years and currently 25% of our orchards are less than 5 years old.”

“We have been able to improve our productions with improved plant material (new varieties), closer planting distances between trees and trellising systems, all of which have improved our yield per hectare.  Although we have received good rains, the effects of the drought are still leaving their mark on this year’s production as our volumes are still substantially down against a normal harvest. The Packhams pears are down by 30% and the Royal Gala apples are down by 50%.

“When I joined the family business my brother and I decided to diversify and started farming with chickens and pigs here on the farm. One thing led to another and as we were producing more and more chickens and pigs, we realised that we needed an abattoir and so we built one here in Krakeel River. Along with the abattoir, the need for an offset grew. Thus we subsequently opened a butchery in Joubertina as well as a general store in Krakeel River.

“As our businesses grew we found that we needed transport to move our products. To solve this problem we bought a truck. In 2016 we started a transport business and we transport our own produce as well as that of other clients. Our meat brand is called Bokmakierie and we sell this both locally and further afield. Our business has grown rapidly and currently, we are training management staff to assist us in the various divisions.

“Though the fruit farming business is our oldest enterprise, the other divisions are also doing extremely well.  The diversification has really assisted us to grow our business and spread our risk, especially in a season like the current one when our fruit productions are down. It also created additional job security for our staff.  With this business model our prospects are looking good for the future,” says Riaan.