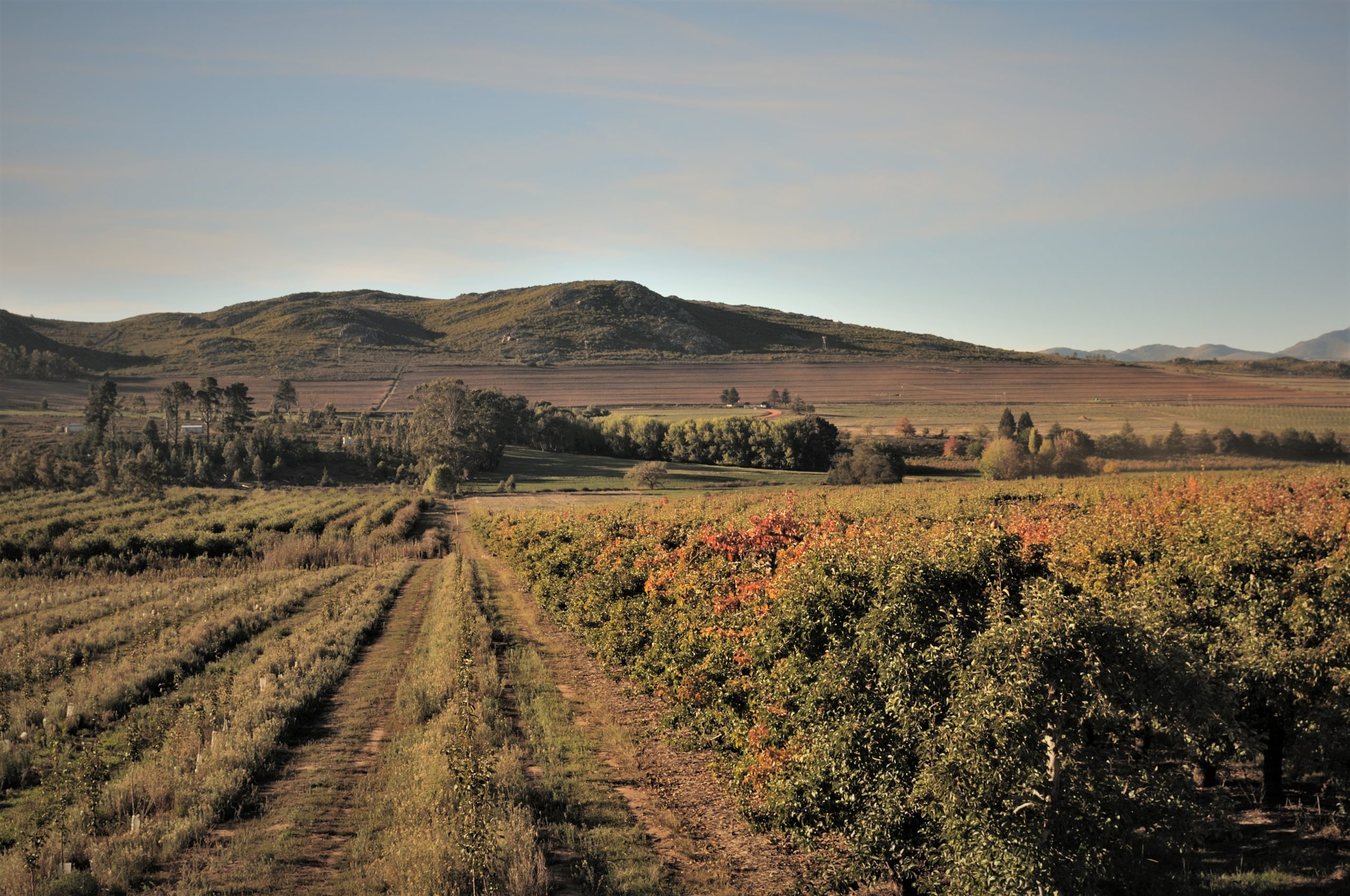 With delivering up to 20% of South Africa’s total pome fruit production, the Langkloof is one of the best deciduous fruit farming areas in South Africa. It is also one of the areas with the most diverse, agri-attacking weather patterns you can find. At any given time you can have a farm and its two neighbours having a medley of hail, drought and a bumper crop simultaneously. The question is why?

The southern slope of the Langkloof consists of the Kareedouw, Langkloof and Tsitsikamma Mountains. On the other side, the northern slope is formed by the Kammanassie and Kouga Mountains. A lot of understanding about the farming success of this valley is locked up in the word “Tsitsikamma”,  a Khoisan word literally meaning “place of much water”. The valley is crossed by numerous streams that arise in the Tsitsikamma Mountains before flowing inland to join the Kammanassie and Kouga Rivers. Only from there onwards does the water flow towards the Indian Ocean. The Langkloof is unique in many ways, but it is also the only place in the country where the rivers flow inland.

The R62 road down the Kloof passes through the hamlets and towns of Herold, Avontuur, Haarlem, Misgund, Louterwater, Krakeel, Joubertina and Twee Riviere, and divides the Langkloof in a northern and southern section.

“Northwards from the R62 is the almost Karoo, stretching towards the Baviaanskloof, making it the driest part with around 300mm per year,” Riaan Strydom from Bokmakieriestrust near Krakeel starts explaining. “To the south, it immediately looks different. Joubertina, Krakeel,  Louterwater you’re talking 500 – 600mm and then when you go into what we call the corners of the Tsitsikamma Mountain the rainfall goes up. Like Krakeel’s corner gets 1 000mm every year.”

So hence the name Tsitsikamma, place of much water. It’s all about the right combination between geographical shape, wind and temperature. The Tsitsikamma firstly forms a shield literally culminating the moisture and depositing it into the geographically natural catchment areas, the so-called corners. Often it will rain splendidly in the various Tsitsikamma corners while the sun is beating down in the northern Langkloof.

“If you do not have farmland on the southern side, you won’t farm stone or pome on the northern side. You have to relay water northwards to ensure healthy crops.” Riaan concludes.

Be that as it may, even the southern side has been running drier and drier over the last few years. The reserves are being depleted. There are theories about it including earth warming and the seven years cycles, but at present nobody really has an answer, but all are concerned.

The United Nations Office for Disaster Risk Reduction (UNISDR) divides drought into four levels and although they are progressive, one specific area can have more than one overlapping to a degree.

It begins with a meteorological drought where a region-specific expression of a precipitation’s deficit from the normal (over a period of time) is the first indicator of drought. It is a period ranging from a few months to several years or even decades of low rainfall compared with annual averages.  The Langkloof is pulling some years of a deficit in precipitation currently.

Next up is an agricultural drought when “the amount of water in the soil no longer meets the needs of a particular crop, pastures and rangeland species” (UNISDR 2011: 57). That is, 75% below average rainfall leads to an imbalance in the moisture content of the soil during the growing season. Many Langkloof farmers, especially at the top end near Uniondale and Avontuur, like Jimmy Zondagh, are experiencing serious agricultural drought. “As little as 150mm will wet the total surface of our orchards, even between the rows. In the last five years, we didn’t get near that and many roots have consequently died,” Jimmy says. A serious imbalance in moisture content. Agricultural drought.

The next level is known as a hydrological drought when reduced rainfall continues over an extended period and the decline of surface water including dams, lakes, reservoirs, rivers, streams and groundwater as well as subsurface water gets so low it begins to affect issues such as urban water consumption, energy production, ecosystem preservation, tourism and recreation. “We started harvesting water. Even if only for own usage,” Jimmy explains. “We use nets. You see, when it is a dry year – like most we had lately – there is always a lot of mist. So we span these nets, with down-flow gutters to catch the moisture. If the mist is solid, you can catch up to a litre of water per square kilometre in about an hour. But then the big fire came, melting all my nets. We’ll put up new ones soon …”

Farmers, hey they never give up.

“We have a property as you go down with the Prince Alfred Pass to the Keurbooms River where we had no influx into any dam since November 2015 now,” explains Marius van der Westhuizen, councillor for Hortgro Pome in the Langkloof.  “It was the last time the Kouga dam was 100% full. And look at it now … We are trying to rescue a few blocks via the borehole, but the rest … well we don’t even have to take them out, the trees are dead.”  It is hard when the rain does not come down on you, but there is something making it harder. “Then you have Misgund where the dams are about 80% full at the same time. Yet, a mere 15 km further on you find the Haarlem dam with only 7,7% water in it. Welcome to the Langkloof.”

He explains that it has to do with the lack of decent cold fronts over the past years (global warming?). Cold fronts that climb over the Tsitsikamma and the Outeniqua Mountains, all the way to the Kouga and Baviaanskloof Mountains. Then it turns around forming what the old folk called “oosweer” (eastern weather), weather that pushes back into the Langkloof, bringing rain to the whole kloof for a couple of days. Rescue. Maybe this season. Welcome to the Langkloof.

Robin Baldie is another farmer braving the weather patterns in the Langkloof. But the Baldies have been doing so since 1904 when his great-great-great-grandfather planted the first commercial orchard. “Maybe the rain was more constant then, but I believe it was just that the competition for the marketplace was much less. There were not that many commercial fruit farmers then, so people were happy buying smaller apples. Today you need a lot more water to get the fruit up to a size to sell. So, the weather didn’t deteriorate, the competition just got a lot tougher. Demands have changed.”

With a Baldie track record of 117 years, Robin believes the rain, or then the lack thereof, is a cycle. “It is, it has to be, otherwise how did it become such a major fruit growing area? If it is not a cycle anymore, we are in deep trouble.”

Yet, sometimes the water does come from the sky. Solidly. As in huge clumps of ice. The dreaded hail. Most every year the Langkloof gets its hail, but mostly it takes out small percentages of everybody’s crop, not crippling anybody really, Robin explained. Maybe one can call it the angel’s share. “But this year in January we were blasted! We lost between 70 to 80% of everything, and our crops are spread out over quite an area. We have 3 000 ha of land, with 300 ha under orchards spread out. Still, we were hammered.”

A lot of farmers had a lot of hail carnage in January. Ricardo du Preez from Langfontein lost 95% of his crop. In three minutes. The same Tsitsikamma Mountains, the place of much water can be instrumental in sending that water down in huge iced clumps. This happens when in the rain making process a situation known as orographic lifting occurs. That’s when the mountainside forces horizontal winds upwards, dropping the temperature and thereby intensifying the updrafts within thunderstorms and making hail more likely. In 2021 that formula worked to the detriment of many farmers. If this is going to become the new normal, more and more orchards will go under nets.

Apart from the lack of water or water as ice from the sky, the weather of the Langkloof has many other stings. From wind damage to sunburn or frost, the Langkloof is not for sissies. But the Langkloof is special, different; it is even a bit mysterious, offering a sense of adventure, a challenge. If you can learn to live with and love the Kloof, it will reward you. It’s people have learnt to weather the weather, and knows, in the end, the Kloof will always look after them:

I was burned out from exhaustion, buried in the hail
Poisoned in the bushes and blown out on the trail
Hunted like a crocodile, ravaged in the corn
Come in, she said
I’ll give you shelter from the storm
– Bob Dylan