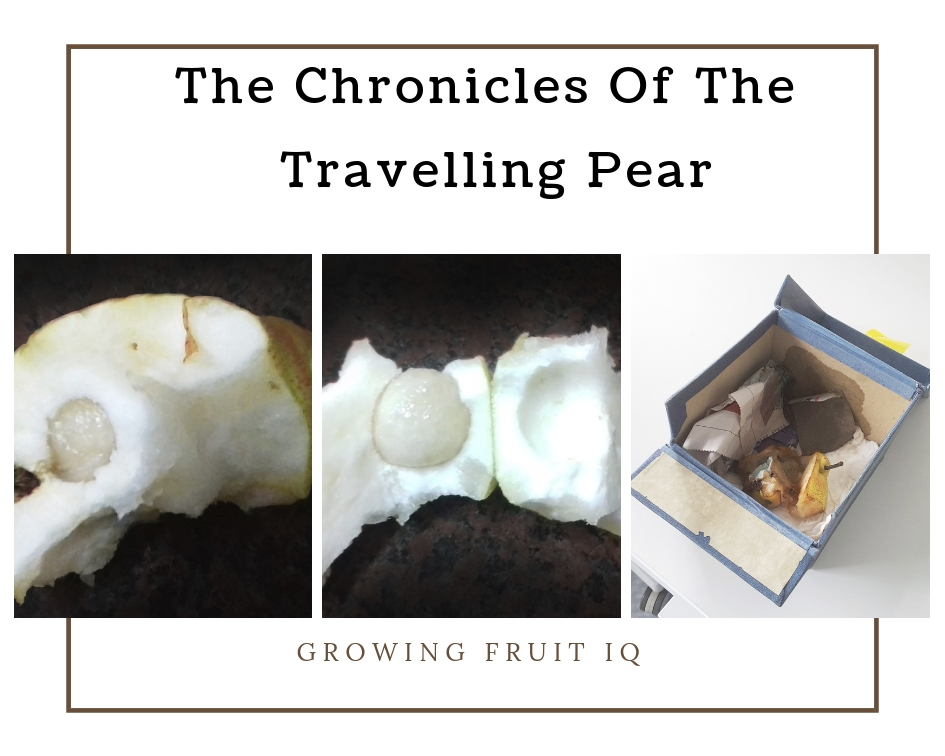 One Forelle pear, a strange looking lump, a funny smell, and 1 506 kilometers. This is the story of a single pear’s journey across the country and one company’s dedication to science and the deciduous fruit industry they serve.

On the third of October, Hortgro received an intriguing email titled “What is going on here?” Somehow, somewhere, in the small town of Pennington on the south coast of KwaZulu-Natal, someone had found a pear holding an unexpected surprise or two – and not the good kind.

“Good morning,” it read. “The day before yesterday I was enjoying a pear when all of a sudden I smelled a horrible scent. It was completely like the old DDT if I remember correctly, or poison of some sorts.” The startled consumer further explained how he stopped eating the pear and saw a strange appearance in the fruit.

“It is very soft and mushy,” he described the odd-looking lump. “I have the pear and its ‘fetus’ in a plastic container in the fridge. I thought you might be interested. Please let me know what is going on here.”

It is not every second man (or woman) on the street who would take such interest in a quite frankly, gross-looking pear, as the photos he took clearly demonstrated. It takes an inquisitive and curious mind. No wonder the email was signed with kind regards from Fanie Olivier, famous Afrikaans poet and author, winner of the prestigious Reina Prinsen Geerligs Prize, as well as journalist, teacher and qualified advocate of the High Court of South Africa.

Elise-Marie Steenkamp, Group Communications Manager at Hortgro Science, responded to Olivier. Yes, one of their researches were very keen to examine the abnormal pear. The sizeable challenge, however, was getting the pear to the Stellenbosch University (SU) laboratories for testing. A courier was the only option that made sense, and Hortgro was willing to finance the long journey ahead.

Until then, “the precious pear” was to be kept safely in a lightbulb box in the fridge, its new temporary home for the weekend, until pick-up the coming Monday. The pear needed to breathe, said Hortgro’s Post-Harvest Programme Manager Richard Hurndall, which meant no tight wrapping and a cardboard box of some kind.

And so the peculiar Forelle pear started its travels from Pennington resident to probing subject, arriving safely in Stellenbosch the following Tuesday.

Cheryl Lennox, Fruit and Postharvest Pathology Research Programme leader at SU, was very puzzled when she first saw the photos that Olivier took of the pear. According to her, growths in pears are not very common.

“It was the first time I ever saw it like that,” says Lennox.

Even though, at first glance, she suspected the cause to be some sort of cellular malformation within the tissue of the pear, it was still imperative to have it tested for certain. You always have to start somewhere. If there is a real problem to be picked up, the earlier it is done the better, as to find a solution as fast as possible or maybe alert the industry of a threat.

“When we received the sample, the big question for us was whether there was a pathogen causing it, or whether the growth was caused by something fungal or bacterial. So, it was important to get it to the lab and have a look under the dissecting microscope,” says Lennox.

Unfortunately, by the time it got to the lab, there had been quite a lot of contamination on the surface of the tissue. After opening up the tissue, what appeared under the microscope was a heap of cells massed together. There was nothing obviously problematic inside, like larvae or eggs, which might have indicated insect damage of some sort. The isolations from the mass of cells only revealed the presence of penicillium, a common air contaminant.

“We couldn’t say whether the penicillium actually caused that growth in that tissue,” says Lennox. “I think fundamentally it was something cellular rather than pathogenic in that fruit.”

Cellular mutations are usually caused by certain imbalances or some unexpected changes within the cells. It is just a freak of nature that suddenly happens, and (as in this case) may have very odd-looking consequences.

If you spot something lumpy, bumpy, gooey, gross or just strange and unfamiliar in a fruit, says Lennox, it’s always best to reach out to experts and have it analyzed, just in case. She advises that you get a hold of the local university, maybe the biology department, or if you are nearby and have access to Hortgro, work through them.

“I think this story just demonstrates that Hortgro has the industry at heart,” says Lennox. “Hortgro is there to serve the industry and I think it shows.”