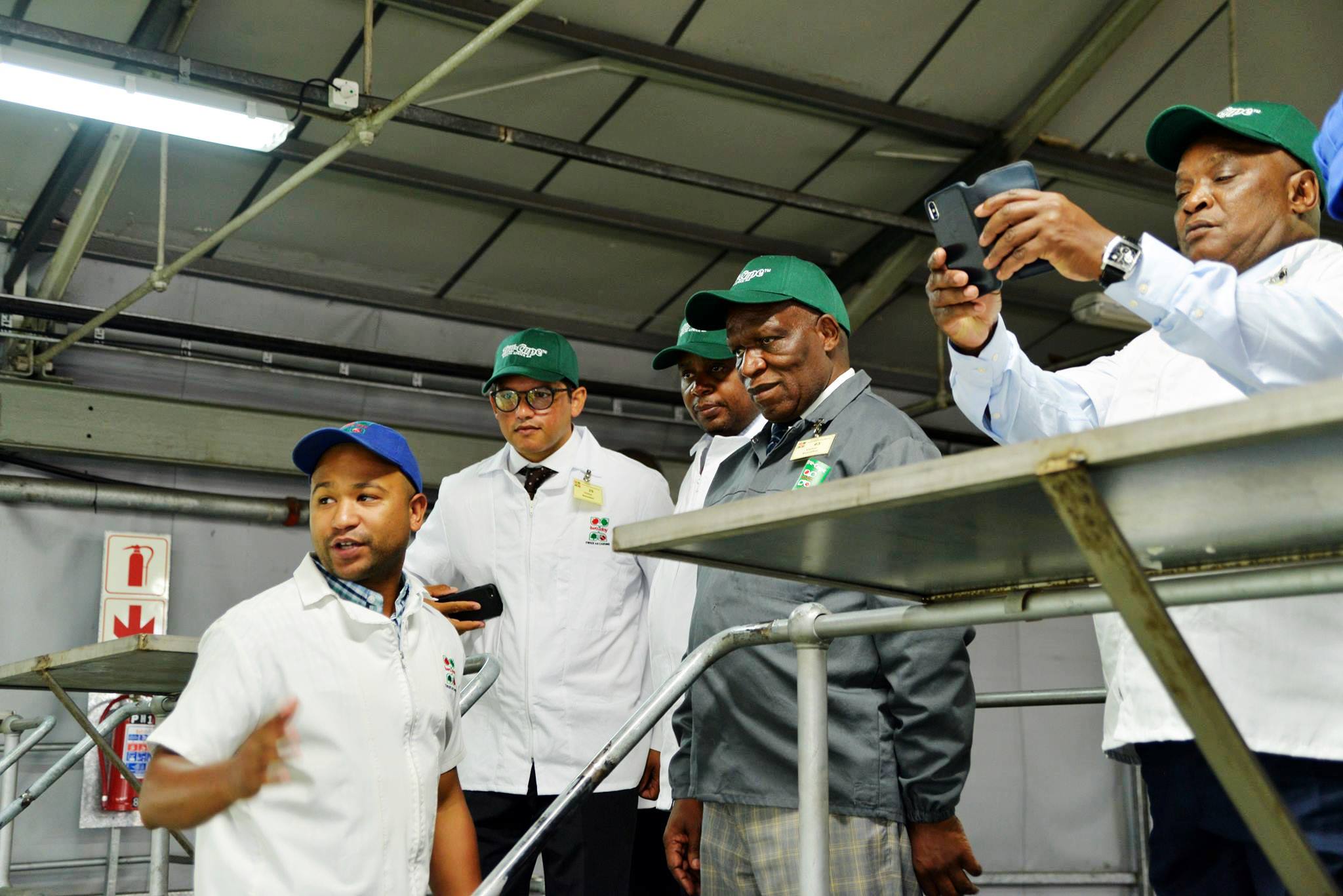 This historic visit was facilitated by Fruit South Africa CEO, Dr Konanani Liphadzi. Liphadzi said during the welcoming that ‘getting the Minister to the fruit industry has been a dream come true’. “We are proud to showcase this R44 billion industry that is rapidly growing with new hectares being planted annually. We are eager to partner with Government to address issues such as job creation, transformation, and upliftment.”

During a short briefing session, Two-a-Day Managing Director, Attie van Zyl, gave an overview of the company and the pome industry as a whole. Van Zyl said that Two-a-Day is passionate about agriculture and all the workers that they employ. “We are the biggest employer in EGVV and have 8000 workers which consist of 1800 factory workers, 1200 farm workers, and 5000 seasonal workers, and thereby, indirectly care for a further 32 000 dependents in the EGVV region alone.”

Two-a-Day is proud of their transformation achievements. One such policy has to do with an education scheme for workers’ children. “No child of any worker, who has the potential to study, should not do so due to insufficient funds. The Two-a-Day Education Trust was created to support workers’ children thereby helping them fulfill their potential.”

Van Zyl further said that they believe in value chain integration and empowerment. “Two-a-Day has transferred more than R1 billion in value to various empowerment projects.” He mentioned several schemes and empowerment initiatives as examples.

Cheryl Kammies a packhouse worker at Tow-a-Day said that she was proud to be an employee of the company. “I have worked here for fourteen years and put two children through school. Both of them are well-educated. “I can honestly say we have a very good relationship with management and as co-beneficiaries, in certain projects, we are well-cared for.”

Errol April, an emerging grower and Two-a-Day member, said that black farmers should be represented throughout the agricultural value chain. “There are too many inconsistencies with regards to ownership of the land. We need government to hand over the title deeds as financiers find it difficult to have confidence in our sector. Black farmers want to stand tall and be successful. We can farm, and we can export fruit – the same as any other commercial fruit producer. Help us do it. We will pay back the money.”

DAFF DG, Mike Mlengana, said that the Department was inspired by the level of commitment from the industry that they had witnessed. “When the government and industry work together, we can achieve more. There are serious issues such as food security and job creation that need to be addressed, and agriculture is well-positioned to make a significant contribution in this regard.”

Minister Zokwana addressed some of the challenges mentioned by role-players and said that the government is taking note of all the challenges that industry face. “With respect to free trade we are going to do our jobs, and specifically with regards to pear exports – we hope to open Thailand and China this year.”

After the meeting, the delegation visited Oak Valley to see the agri-worker housing, school facilities, and crèches.

Later the same day the Minister delivered his annual service delivery forum at the Erinvale Hotel in Somerset West. He spoke to more than 150 politicians, captains of industries and other role-players.