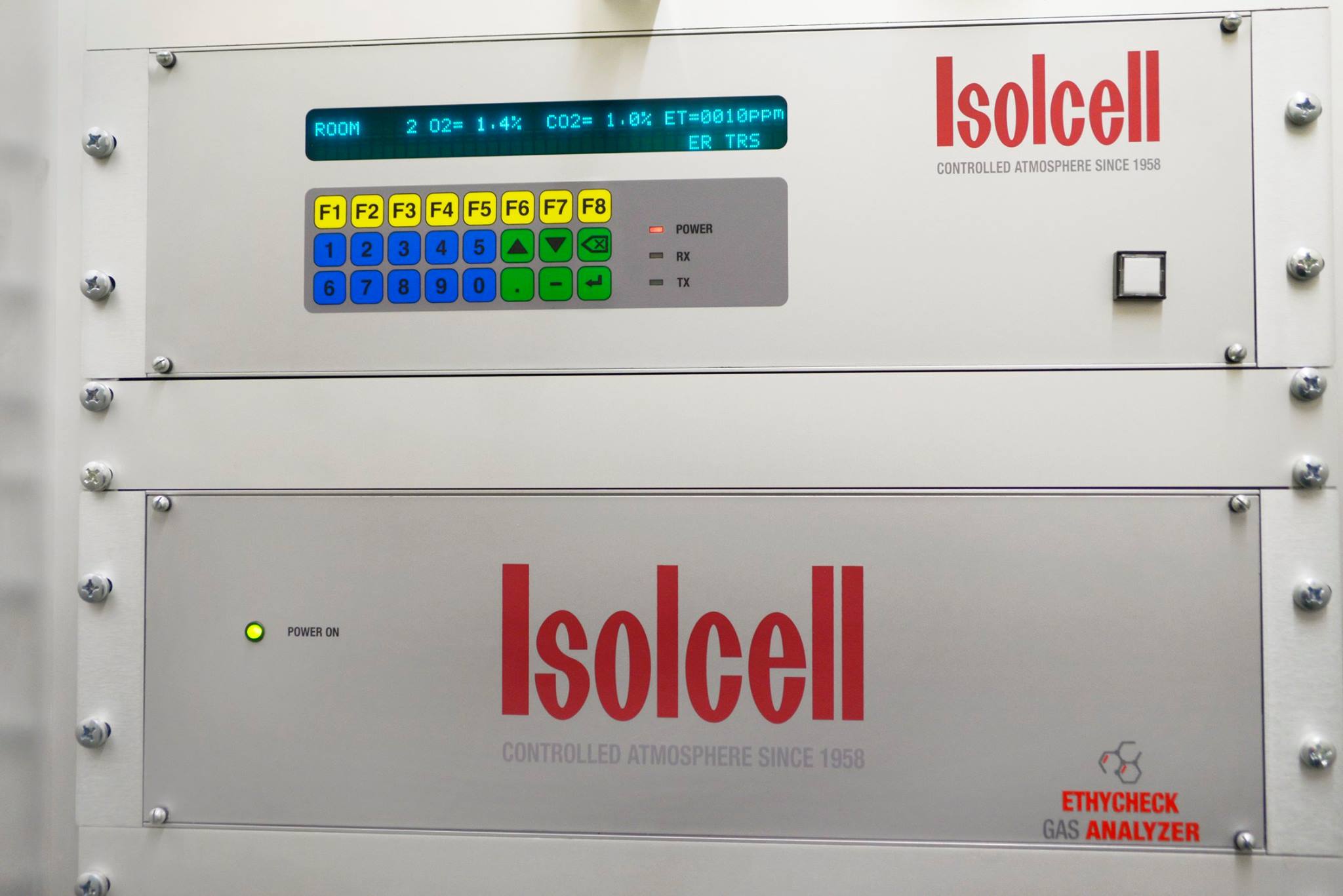 Hortgro Pome recently invested R2.5 million in a pristine world-class controlled atmosphere (CA) research facility at Stellenbosch University (SU). Those involved, are very excited, as the facility will help solve post-harvest problems within the industry, such as the very pestering superficial scald. The state of the art equipment places SU at the frontline of CA research and seeks to answer the previously unanswered question to ensure the success of various cultivars.

There is no point in conducting research if there is no demand for it in practice, and according to Dr. Elke Crouch, post-harvest physiology and technology researcher at SU, the practical applications of the new controlled atmosphere (CA) facility are endless.

“It is actually such a great field to work in because there is always a need you are addressing,” says Crouch. “It is always applicable.”

The advanced facility will help solve post-harvest problems within the deciduous fruit industry. Not only will it enable researchers to determine how long pome varieties can be stored, but also in which atmospheric conditions post-harvest defects can be minimized. According to Isocell, this new system installed by them at the US is the best they have worldwide. This makes SU the only research facility globally, with this set of equipment on a single premise.

“We are very excited because this makes us world-class. We are at the forefront of research, where we’ve never been before,” says Crouch. “We are excited about so many things, especially getting answers we’ve never had before.”

The new CA facility allows researchers to compare three systems, using four treatments, with one another. The DCA-Chlorophyll Fluorescence (DCA-CF) system allows for a treatment that scrubs ethylene and one that does not, and measures the respiration quotient, while the Absoger or XLO system also scrubs ethylene, but at very low oxygen levels. The Van Amerongen or DCA-RQ system is a more dynamic system and estimates the amount of oxygen the fruit uses and produces and then changes the oxygen levels according to that.

“There are a lot of possibilities. You can play around and answer many questions,” says Crouch, who is currently taking the lead in the CA research project at hand. “However, you will have to do it bit by bit, and not everything at once.”

The current research compares the three systems and determines which atmospheric conditions will optimize the fruit’s post-harvest storage life. It aims to answer questions like whether ethylene scrubbing improves long term storage, and also evaluate other parameters of the different systems, including the ease of the system control, support, and communication.

The two-year-long project also looks at the cost of the different systems, comparing their prices and outcomes, and determines whether the large investments need from producers will be worth it. Certain systems are cheaper than others. The less pricey Absoger system, for instance, does not change dynamically and has a certain fixed level, but also absorbs ethylene.

“So, the question is, can you get away with a smaller investment, but have the same outcome?” asks Crouch.

According to her, the significance of the new equipment lies in the fact that they have a variety of controlled atmosphere systems in one premise.

“For any controlled atmosphere system you can determine how long you can store fruit, but I think the fact that we have different types of CA systems allows us to create different recipes for each cultivar,” says Crouch.

At the end of the day, why do we have a controlled atmosphere? According to Crouch, it is simply to store fruit as long as possible, while maintaining its quality.

Probably the greatest issue and main storage disorder in pome fruit, which can lead to large financial losses, is superficial scald. Fruit are stored for extended periods to take advantage of main export markets, and often displays light brown to black blemishes on the fruit peel, rendering it unmarketable. If a piece of fruit is damaged, it is ugly, and if it is ugly, it cannot be packed for the overseas market. If fruit can be kept healthy for a longer time by controlling the storage atmosphere, the industry can make more money in a time of the year when there aren’t many quality apples and pears overseas.

“Quality is very important. If your fruits are not of quality, then you receive a claim. This means you are going to cut the short end and you’re going to pay for those apples rather than make money,” says Crouch.

Up to this stage, superficial scald has commercially mostly been controlled by drenching the susceptible fruit in diphenylamine (DPA), a synthetic antioxidant. According to Gustav Lotze, technical manager at the SU Department of Horticultural Science, they want to eliminate superficial scald by the application of a system as opposed to a treatment or chemical used on the fruit. The key driver of finding alternative ways of controlling superficial scald was the fact that the EU banned the use of DPA a number of years ago.

Lotze, who is responsible for monitoring the atmosphere and the cooling of the premises, explains that there are various safety measurements in place to ensure that the very expensive equipment and the people working with it, stay safe.  These include sensors to that detect possible leaks or alarming oxygen rates, and an alarm system that informs Lotze if anything is out of place.

According to Lotze, the electronics of the facility is what he most enjoys. The advanced system allows him to monitor every aspect of the CA facility via computers.

“It gives you so much more advantages,” says Lotze. “In the past, you could only import a gas composition into the computer and it would regulate it for you – that is all. You did not know what was going on inside the closed container, but now you can actually see what exactly is happening, with the help of electronics, on a computer screen.”

For Crouch, it is simply the concept of creating conditions enabling fruit to be stored for such a long period that excites her.

“I think enabling people to store fruit for so long, is simply amazing,” says Crouch. “This small living product, with its tiny amount of energy, can be stored for such a long time if you keep the oxygen levels low enough. However, not too low either – just-just right.”

So the big question that Crouch is hoping to answer in future is: “Where is that just-just right?”