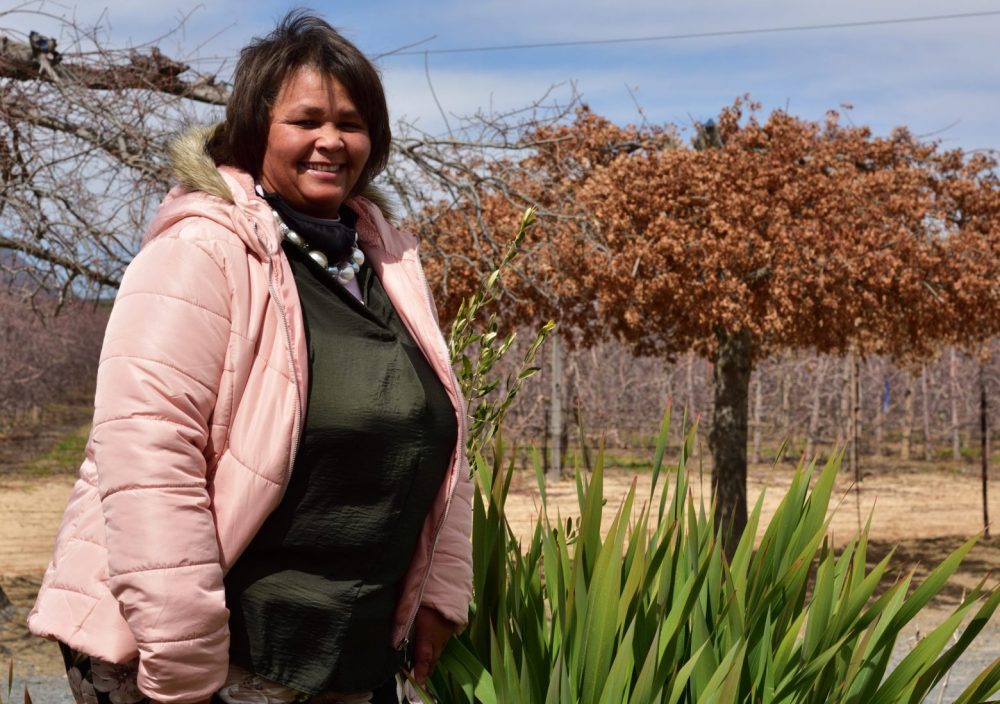 Lien Visagie is the newly elected chairperson of the board of Partners in Agri Land Solutions (PALS). Getting there was a long and a hard road, but the road ahead is the real challenge. Gerrit Rautenbach discovered how a light bulb made it all happen for Lien.

I arrived at Donkerbos Community Centre where Lien Visagie’s office is, just as she came flying in from the opposite side in her little bakkie. From afar I could see her smile and call “hello”. Before she got too close for COVID comfort she slipped her mask on. When I read the message on her mask, I knew this was going to be a great story. I’ll get back to that mask later.

“You see, my mother was an innocent young girl from the farm Inverdoorn in the Karoo who went to Ceres looking for work. As far as I know, my father originally came from Port Elizabeth and also worked in Ceres, where they met. Rooi hakskene, you know! However, before I was born he had to go back to PE and never came back. I have never even seen a picture of him. I mean, doesn’t every child wants to know its father?”

This is how Lien starts her story. A story of belonging and yet not belonging. Her young mother couldn’t cope and at the mere age of nine months, Vytjie, an aunt on her mother’s side offered to take care of Lien. Vytjie legally adopted Lien, but never denied Lien’s mother any visitations. Lien stayed in close contact with her biological mother until she passed away in 2013.

Behind Lien’s desk is a poster on the wall with a famous Nelson Mandel quote: “Education is the great engine of personal development. It is through education that the daughter of a peasant can become a doctor, that the son of a mineworker can become the head of the mine. That a child of farm workers can become the president of a great nation…”

Lien started her education, like most kids, at the age of six. The school was seven kilometres away. She had to walk there and back. Which she did. Her adopted siblings all gave up on the walking. The high school was in Ceres and that meant boarding school. Grade eight went well, but at the end of grade nine, she was informed that she did not pass. She had to leave school and go and work.

At 14 years of age she was employed by a couple from Sarepta in Kuils River. The man was Hennie, but his wife was always Mrs Jansen. She was a strong woman. One that demanded respect. This was something Lien never forgot.

Although she was an employee, she lived on the same premises and soon felt like part of the family. “Mrs Jansen became like a mother to me. Maybe also filling the void of a grandmother,” Lien explained. “They had the vision that I could be more, so they enrolled me at Success College. Distant learning didn’t work for me, and I did not finish my studies.”

“One weekend when I came back from Kuils River to visit my family on the farm, I was introduced to Bennie. I soon realised that this handsome man with the sexy calves and I grew up together! We stayed in contact, wrote love letters to each other – I still have them! When I was 18 and he 22, we got married. I know I was ridiculously young, but it was the best thing that could have happened to me. I had an overwhelming need to have a rock-steady family of my own. It solidified my life.” They are still married, still in love, and still best friends.

All the years, full of loneliness and “not-belonging” made way for a structured life with a sense of purpose. But Lien never forgot the lonely struggles. That’s why her whole life revolves around helping people that feel misplaced, to help them to cope.

At first, she stayed at home on the farm with her mother-in-law while Bennie worked as a general worker at Donkerbos. So while Bennie was promoted to a foreman she became one of the general workers, clearing orchards and planting onions. But she knew she was destined to do more; to be more.

Her new journey began when the farm manager’s wife decided to form a crèche for all the farm kids and appointed Lien as one of the teachers. Lien empowered herself with courses from the Rural Foundation. That was just the beginning. She convinced Bennie, who officially only had grade eight, to join her at Koue Bokkeveld Training Centre, where they completed their Matric. Thereafter she did NQF4 at a college in Worcester. Lien is still the backbone of the Donkerbos crèche and aftercare centre.

In 2012 Mr CP van der Merwe, the owner of Donkerbos, identified a group of workers on the farm that fitted certain criteria and offered them shares in the farm Disselfontein. Lien and Hennie, because of their commitment and hard work, we’re part of this fortunate group. Eyethu Inthaba (on our mountain) was established in 2014 with 70% share in the name of CP van der Merwe and 30% belonging to the empowerment group of 13.

The mission was to switch the shareholding as soon as possible. Most importantly, three directors were chosen for this group – Johnny Karolus, Joseph Xolisi Ndaba and yes, Lien Visagie. She discovered her real purpose in life, black empowerment. The adrenaline kicked in. The opportunity to help people to improve their lives was there.

In the same year, the Partners in Agri Land Solutions (PALS) initiative was established in Ceres. The directors of Eyethu Inthaba saw it as a great opportunity and decided to become a member. Lien kept on excelling and last year she was elected as one of the directors of PALS. It took Lien Visagie one year to become the chairperson of the PALS board. She is perfect for it. Because she cares, always looking out for the underdog, empowering people, especially the sisterhood. Which brings me back to the mask she was wearing. It stated: “Sisterhood is powerful”.

“You know,” she concluded her story, “One day Mr CP van der Merwe said to me that it’s all about choices. If a bulb in your house has gone out, you can sit in the dark and wait for someone to come and fix it. Or you can fix it yourself. That day, the lights came on for me. As a woman, I don’t have to stand back for anyone.

“I am grateful for this opportunity but I’m not doing it to leave memories of myself behind. All I want to do is know that maybe I helped one child to get one more meal today. And it changed his or her world.”

Referring back to Madiba’s quote: This daughter of a peasant did not become a doctor, she became the chairperson of the Board of PALS.