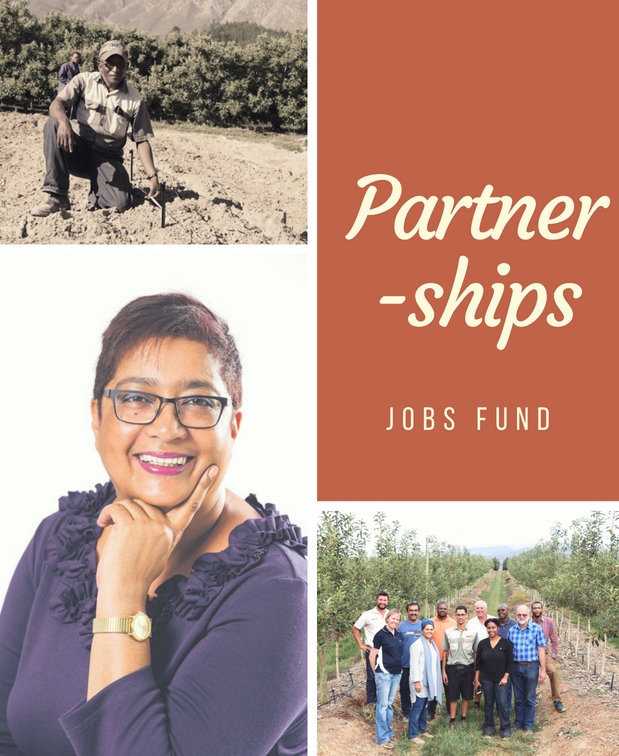 Through their involvement in the National Treasury’s Jobs Fund Initiative, the Western Cape and Eastern Cape Departments of Agriculture together with HORTGRO, are showing what can be done when public and private enterprises work together.

The Jobs Fund initiative aimed at creating new jobs and graduating smallholder deciduous fruit farmers to commercial status, is, in spite of the drought, on track to establish 316 ha of orchards for project beneficiaries by the end of next year and has so far exceeded some of its employment targets by creating over a thousand seasonal jobs.

Treasury has granted R60 million for the fruit industry’s Jobs Fund project, matched by an R40 million contribution from the Western Cape Department of Agriculture and R20 million from HORTGRO. “By pulling resources, such as funding and expertise, and using a commodity approach, we are able to better strategize interventions, avoid the duplication of services and ultimately get much better returns on investments that would have been possible if programmes were run separately,” Sebopetsa says.

Joyene Isaacs, head of the Western Cape Department of Agriculture, agrees: “Land reform is critical for the transformation of the agricultural sector, and given the expropriation of land without compensation debate, the bigger challenge is how to support new entrants to make a success of their land for farming. I believe all South Africans and sectors – private, public, academic, civil society and so forth – should play a role in supporting these new entrants. The commodity approach offers a model for post-settlement support.”

The Department has been using a commodity approach in most of its empowerment initiatives since 2009 already. Bongiswa Matoti, director of the Agricultural Economics Service division at the Department, says partners in these initiatives complement one another by building on each others’ strengths and overcoming weaknesses in one another’s armour.

Isaacs adds that the commodity approach is an admission that government cannot do everything and do not have all the skills to support new farmers: “The commodity approach creates partnerships space for all South Africans to contribute, but ensure the roles and responsibilities are clear. In addition, it creates a common agenda and purpose and allows the private and public sector to tackle obstacles and challenges together.”

Felix Hobson, chief director of Entrepreneurial Development at the Eastern Cape Department of Agriculture, says that the commodity approach is also reaping fruit for the Jobs SA deciduous fruit projects in the Eastern Cape.

“The commodity approach is definitely the way to go. Farmers get access to excellent extension services from HORTGRO and projects are thoroughly evaluated before money is invested in them to ensure their success. The approach is much more commercial than social, which ensures the long-term sustainability of projects.”

An “I can” mentality

Charl van Rooyen, who is one of the farmer support and development specialists on Sebopetsa’s team, sees his job as more than just giving technical advice and support, but also the commercialisation of smallholder farmers by creating an “I can” mentality.

“It is extremely difficult for a smallholder farmer to envisage success when confronted by so many overwhelming challenges. My goal is to equip them with farming skills – ranging from production to management, administrative and marketing skills – and to help them believe that they have what it takes to be successful farmers. Synergies through partnerships with HORTGRO and other service providers help to strengthen this message and allow us to achieve results that some people previously thought would never be possible,”  he says.

The Agricultural Economic Services division at the Department is involved in the project in two ways. Through her position on the steering committee of the initiative, Matoti ensures investments are well-looked after, and through her Market Access Programme, the division is helping the farmers to become market compliant.

“The idea is not only to empower farmers to sell good quality ethically produced fruit locally, but to ensure they comply with the latest international standards on food safety and hygiene, environmentally responsible production, ethical trade and such, to allow them to cash in on the more lucrative overseas markets so they can turn into viable commercial farmers,” Matoti says.

Van Rooyen identified the drought as a major set-back and one of the biggest challenges facing the initiative this far: “The drought has been traumatic for most of the beneficiaries, as orchards that would have been financially viable by 2023 will now only become commercially viable a year later. Producers also had to cope with smaller fruit than usual, which had a negative impact on farm incomes resulting in less money being available to cross-subsidise new orchards.”

The drought also has a knock-on effect on job creation and nurseries. “We could not plant as many trees as we wanted to last year. These trees could not be resold to commercial farmers, as everybody irrespective of the size of their farms, were subjected to water restrictions. We have tried to overcome this challenge by replacing old orchards that are no longer profitable with new orchards and are taking great care to protect the new and commercially viable orchards,” Van Rooyen says.

Hobson says that linkages with commercial farmers or businesses helped to significantly reduce beneficiaries’ risks, especially when these partners have a vested interest in the success of the beneficiaries.

Matoti agrees that partnerships with commercial farmers are a great way to empower new farmers, but warned beneficiaries should not become overly dependent on the commercial partners. “These partnerships should be structured in a way that the removal of the commercial partner does not lead to the collapse of the business. The land reform beneficiary should, over time, be empowered to stand on his or her own feet, so that they would still be able to function independently if a partner leaves,” she says.

Matoti feels projects should run longer than just four years, which is the length of the Jobs Fund initiative, especially with permanent crops that can take up to five years or longer to bear commercial yields.

Hobson agrees: “The majority of beneficiaries do not have sufficient funding of their own or access to loans to help them maintain new orchards until these start to make enough money to pay for themselves. In the absence of funding, older orchards, if there are older orchards, have to cross-subsidise the new orchards placing a huge strain on farmers’ cash flow. New orchards, in the absence of sufficient funding, are then often neglected, with a knock-on effect on production.”

Sebopetsa also identified finances as a great constraint: “The reality is that there is never enough money to do everything we want to, but the Department is trying to partner up with financial institutions to help address this issue. It is not enough to give land and trees to farmers, farmers need resources to maintain these trees until the trees are able to pay for themselves.”

Towards a better future

Sebopetsa invited other sectors to follow the deciduous fruit industry’s example by joining forces with the Western Cape Department of Agriculture to create meaningful transformation: “The Western Cape Department of Agriculture is ready for business. We need more money and partners to replicate our success with the Jobs Fund initiative in the fruit industry.”

His vision with farmer support and development is to use agricultural development to grow the Western Cape economy so that no child in the province will ever have to go without food. “With the right partners and the dedication of my team, I see this dream becoming a reality one day,” he says.

Isaacs adds that success is not based on your skin colour, but on the determination to get ahead and use opportunities: “The rules of game and players make a team, but it is a committed team that makes the difference.”