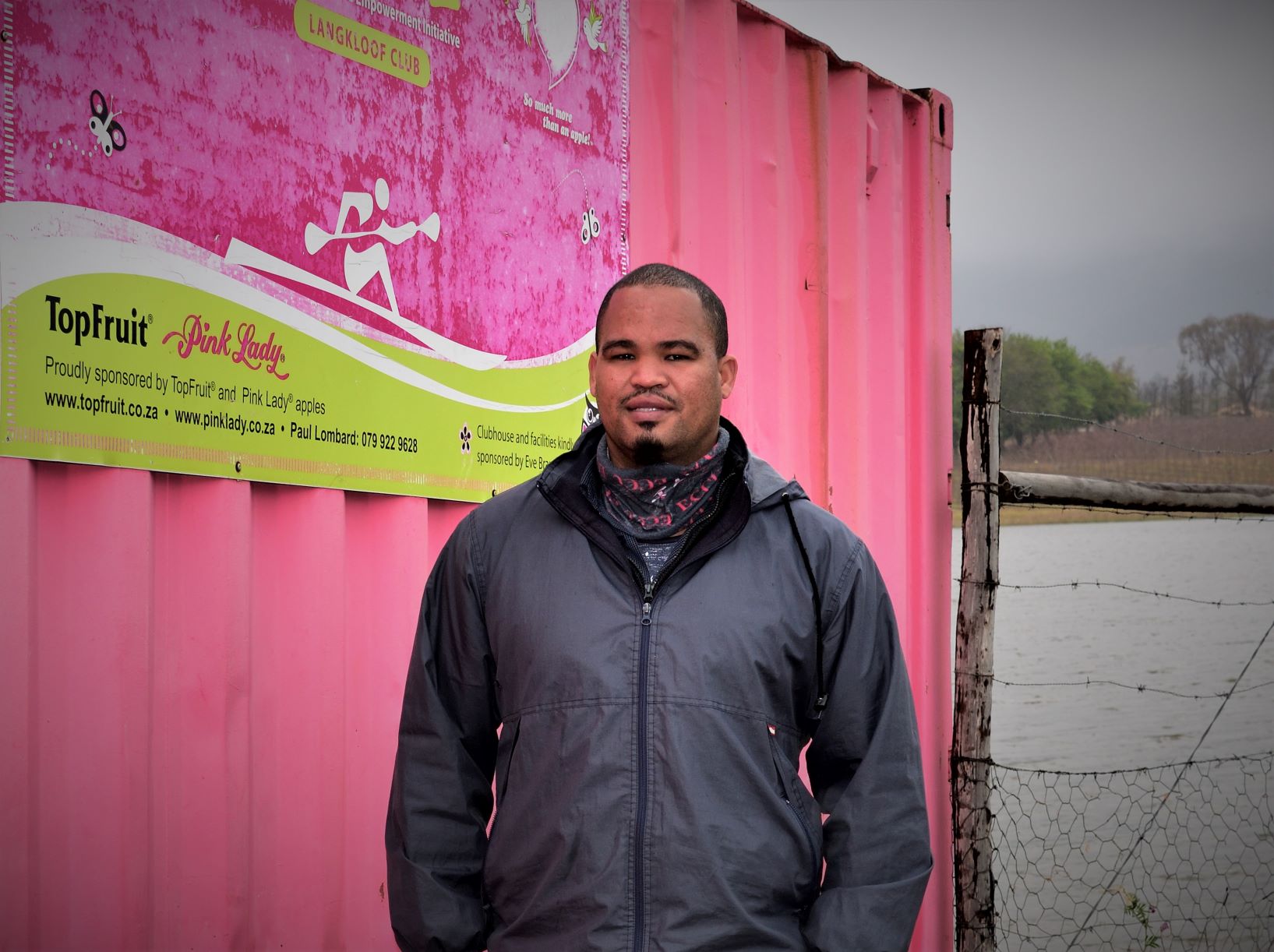 Competitive canoeing shaped Paul Lombard’s life. Literally and figuratively. But it all happened because of a drought. Gerrit Rautenbach explains.

You can clearly see that Paul Lombard, proud manager director of Eve Brand, an apple and pear farm near Misgund in the Langkloof, is a sorted and structured man. Structure that comes from the discipline of sport. Like all serious sportsmen, he is competitive, yet gentle and fair.  That is also how he farms on Eve Brand.

It all started quite some time ago when Paul was growing up on Buffet Olives, an olive farm near Paarl with the Berg River running through it. In 1994 when he was eight years old, the Berg River was too low for the local club to train and they got permission to use the farm dam on Buffet Olives. Every training session Paul would be standing on the shore watching them, dreaming and asking questions.

Then one day his first big dream in life came true. The coach offered him to attempt one of the guppy canoes. From his first paddle stroke, it was clear that he was a natural. So much so that he rowed himself into a sports bursary at Paarl Boys High. In 2001, at the age of 14, Paul became the youngest person ever to complete the Berg River Marathon (somewhat “illegal” as the competition states that entrants must at least 16 years old). He went on to obtain Western Province and then South African colours in sprint canoeing and competed at events in Morocco, Senegal and Tunisia where he obtained various gold and silver medals, and the ultimate was the Junior Olympics in Australia where he came fourth overall. Clearly, he had a brilliant future in canoeing, something he dearly loved and enjoyed.

The Junior Olympics was in December of his Grade 11 year and he came back from Australia a week after his matric year had already begun. He was the local hero of the school, but he decided right there to put his paddle down for the time being. It was time for serious studies.

His good matric helped him obtain a bursary from Hortgro and he enrolled at Elsenburg Agricultural Training Institute where he picked up his paddle again. But there were not enough hours in the day for serious training and serious studying. Down came the paddle again. That was the end of his competitive rowing years. Rowing helped him to get into a top school and into a top college. But it was time to make a focal shift.

After obtaining his degree, specialising in fruit cultivation and viticulture, he started his life in the world of fruit at TopFruit in Franschhoek. He was grateful to be employed, but couldn’t find his feet in an office. His employers at TopFruit saw that and relocated him to their farm Groendal in the Langkloof in April 2011 as an assistant manager. Although far away from his beloved Berg River and canoeing, he was happy. In less than a year he became the manager at Eve Brand. That’s when the real future came like a speeding canoe at him.

Hannes Stapelberg obtained Eve Brand from the Department of Rural Development and Land Reform and created a share farm with the workers. Later Southern Cross Marketing and Management became an additional partner. Today there are 240 beneficiaries owning 60% of Eve Brand. And Paul is one of the directors of this group as well as the managing director in charge of Eve Brand’s production encompassing 298 ha of apple, pear and plums. Because he once held a paddle in his hands, Paul is now holding his future in his hands. Although his competitive days are over,  canoeing is very much part of his contribution to the future.

Paul established a canoeing club in Misgund, helping the young ones to be exposed to the thrill, pleasure, discipline and dedication that goes hand in hand with canoeing. Not to mention the development of literal balance that fuels the figurative balance in one’s life. Due to his earlier involvement with TopFruit, they approached him to help set up the club. Today there is a bright pink container parked next to one of the SFG dams, full of used canoeing equipment from clubs all over. Introducing the Pink Lady Canoeing Club of Misgund. Membership is for kids between eight and 14. If you wonder why that specific age bracket, rest assured it is not arbitrary. Paul was eight when he saw his first canoe up close and 14 when he completed his first major canoeing event.

Today he is ploughing back a lot of the goodwill he had in his life. More so, he is helping to steer the youth into the future. Using canoeing as a tool. And a metaphor …

Dear reader, should you have any used and unwanted canoeing gear for Paul and the Pink Lady  Club, please contact him: 079 922 9628 or paull@langkloof.net. Also, he is planning on starting a cycling club for the kids, so old bikes and bits just as welcome.