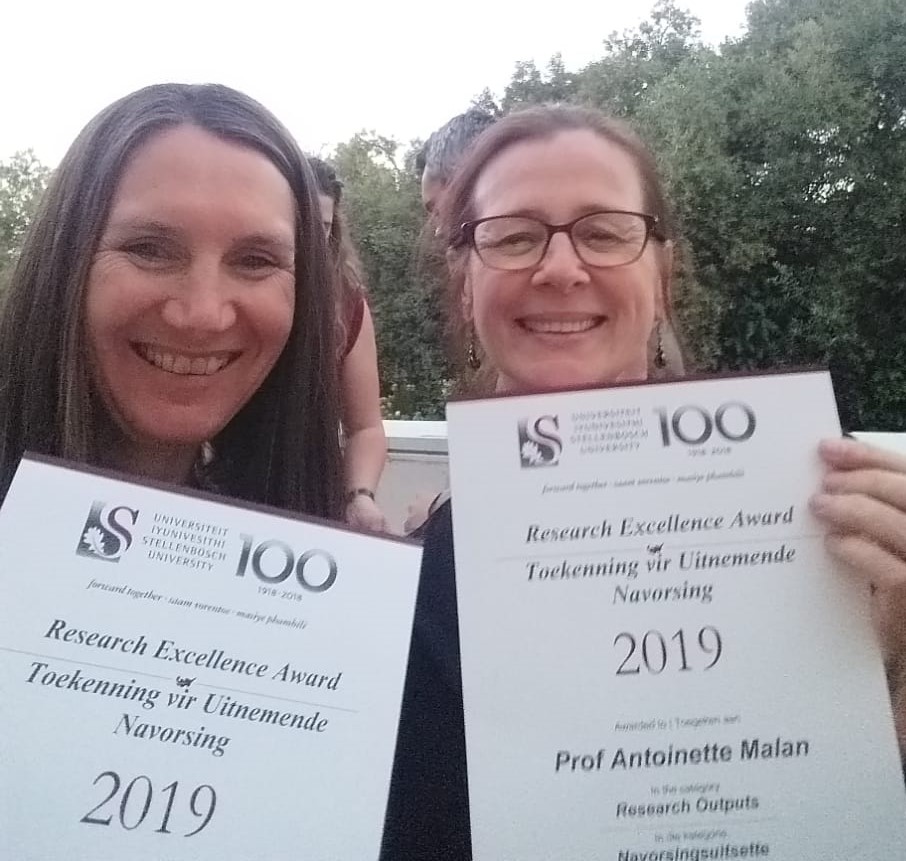 At the start of a new year, many people reflect on the successes and failures of the past. For two of Stellenbosch University’s researchers, their successes were rewarded with research excellence awards. Prof Pia Addison and Prof Antoinette Malan of the Department of Conservation Ecology and Entomology at Stellenbosch both received the Vice-Rector: Research, Innovation and Postgraduate Studies research excellence award for their individual contributions to accredited publications.

An Associate Professor in Entomology, Addison produced 4 Ph.D. graduates in collaboration with her research partners in the academic year (December 2018/March 2019 graduations). These Ph.D.’s covered a diverse range of topics: from false codling moth mating disruption and fruit fly machine learning to leafminers and weevils.

Her role as the primary supervisor of those dissertations was both challenging and rewarding, says Addison. She spends about a third of her time lecturing, while the rest is focussed on research and administration: conceptualizing the topic, funding proposals, attending meetings, mentoring, assisting with data interpretation and of course, hours and hours of reading.

“It is hard work,” she admits. “But it is rewarding. It is a way of getting a lot of research done, especially if you have good students. The best part is seeing the person develop. They have this high mountain to climb more or less on their own, and seeing that person getting their degree is very rewarding.”

Just down the corridor from Addison, Prof Malan’s research is focussed on nematology, specifically the new and very specialised field of entomopathogenic nematodes. Malan received the research excellence award for her contribution of 4.36 publication subsidy units (PUs) in the academic year (as determined by the Department of Higher Education and Training (DHET) based on the authors’ affiliations to research institutions).

“We had nothing to work with, not even the organism,” she says. “I read a lot and tried trapping the nematodes from the soil. In the end, I was invited to visit a laboratory in Florida where I was shown all the relevant techniques. From there on I started doing research with entomopathogenic nematodes.”

Entomopathogenic nematodes can assist with the biological control of pests, especially where pests have become resistant to chemical controls. Over the years, many new species were discovered and recorded in her research. Currently, they are working on the mass rearing of these organisms.

Extending recognition to researchers in a university system is important, both women agree. Acknowledgement for hard work is a good additional motivator, especially in an institution as “big and busy” as Stellenbosch University, says Addison.

“The entire university system is based on self-motivation,” agrees Malan. “And this award is a way to say that what you are doing is good and right. Right from the start, I have been motivated by the goal of publishing.”