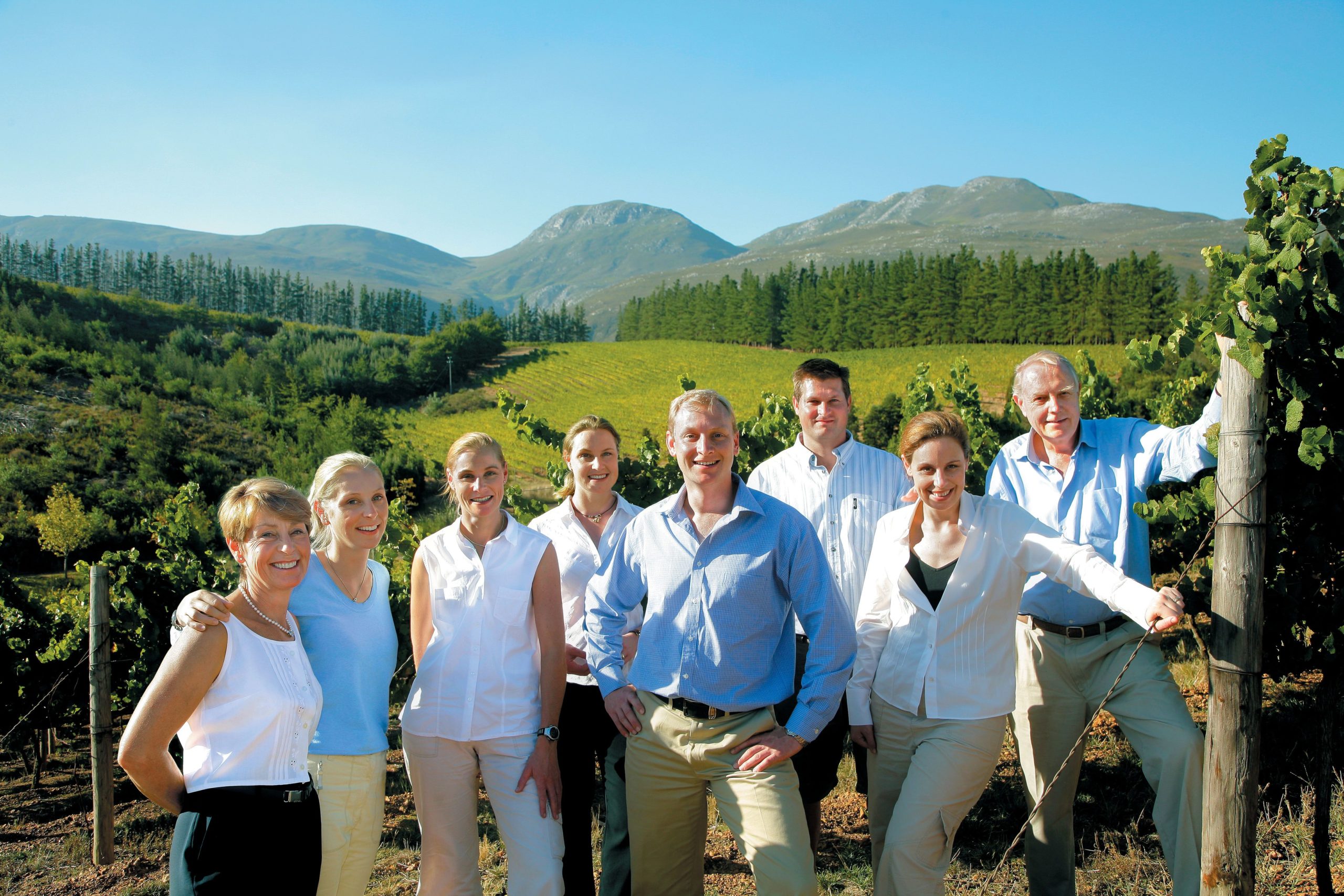 How did De Rust come about?

De Rust is situated in the Elgin Valley. The farming business is split in two: They have 150 hectares of apples and pears, as well as 72 hectares of vineyards for wine production. Karin Cluver’s grandmother started the farming business, planting their first apple orchards in 1948.  Karin’s father started the wine side of the business while still practicing neurosurgery. He retired from his medical career in 1996. De Rust did a joint venture with Nederburg, together with looking at growing wine in a cooler area. The first wine grapes were planted in 1987 and the business just grew from there. They are 5 children of which 4 are involved in the farming business, as well as a son-in-law that is the winemaker. Karin’s grandmother’s family were missionaries from Germany. Their passion for the environment, sustainability, and taking care of people stemmed from both families.

What is your farming philosophy?

“We have a very strong sustainability philosophy. A large part of the farm is located against the mountain and about 50% of the total hectares are under conservation.” De Rust is also involved with LandCare to remove invasive alien plants and in creating ecological corridors that run between the farm and the mountain.

“From both a fruit and wine side, you need to plant cultivars that work in this environment. We tried plums in the past and it did not work here because we do not have enough sunlight hours. You need to plant what works. Identify where the coolest areas on the farm are versus the warmest areas. You need to work with nature, not against it.”

How did you get started with FruitLook and what attracted you to it?

The Cluvers were first exposed to FruitLook at a Hortgro symposium. Dr Caren Jarmain also did a FruitLook presentation for them. “What is really great about FruitLook is that you get to see an overview of your farm. That gives much more insight than just driving to or walking in the orchard.”

How do you use FruitLook and/or integrate it into your everyday actions and decision-making process?

“The ability to interpret the data is very useful. We had consultants helping us and then when you would see a problem block, you can have a look at FruitLook to help pinpoint the problem. You can group your cultivars together and spot if one deviates from the rest. With many of the old blocks we used to take neutron probe readings to determine water status, then we started using continuous probes. But it is difficult to determine where the best area in the block is to place the probes if you do not have soil maps available. FruitLook really helped us determine areas that dried out rather quickly, areas which are the most suitable to place the probes.”

Are there specific anecdotes of how you and your management team engage with FruitLook on a day-to-day basis?

Karin says they do not use FruitLook on a day-to-day basis, but that one of the big benefits that were brought in is the function to pick up variations in the data (FruitSupport).  “It is useful in reminding you to look at your data.”

Any stories of how FruitLook has helped you in a specific situation?

“It is great to be able to view spatial maps of your blocks in FruitLook. This makes it much easier to pick up changes than when you just look at the data. We picked up in one specific block that there were these man-made lines. Very rarely would problems in nature occur in straight lines. We could clearly see there was some type of design issue in the block with regards to the irrigation.”

What would you say is the biggest benefit of FruitLook?

“It gives a good overview of your farm, which makes it easy.” Karin also praised the trustworthiness of the data in FruitLook.  “There are a lot of scientists and technicians behind it, who remove any data that does not make sense. That is a very big benefit. I never have to wonder if it is a mistake like a probe that measured inaccurately. The data is accurate.”

What would you recommend as the biggest improvement for FruitLook?

Karin mentioned that one of the problems with a lot of technologies like FruitLook is that it is not real-time data that you get. “One of the disadvantages of FruitLook is that you are always looking back, the data is a week old. What is good is that the data is accurate and there is a lot of data, you can do a lot of analysis and evaluations. But using that data in the current season is difficult because it is old. That is the problem with satellite-derived data, sometimes there are clouds for example and then the data could be two weeks old. You cannot just use FruitLook alone, it is just one of your tools.”

What would you say is the biggest threat for FruitLook?

The tool’s user-friendliness is FruitLook’s biggest shortfall, according to Karin. “It is difficult to get set up and to understand it initially unless you have someone to help you. You don’t want to sit in front of your computer for hours trying to figure out what is wrong. You need an indicator to tell you something is wrong, like a red light popping up.” Karin suggested that, where possible, the data should be live. “It would also be good if FruitLook could make suggestions for you. Perhaps something like a robot system: red, green, orange to prioritise blocks in terms of stress or help highlight outliers.”

What are the best channels to work through to spread the word?

Karin suggests it would be best to make use of various organizations like Hortgro, Vinpro, Winetech, etc. She has no doubt that there will be more pressure to use water more efficiently, especially after the recent drought experienced in the Western Cape. “You will be placed under pressure if you want to sell a product. Questions will arise around what you are doing to be more sustainable, to look after these scarce resources. It’s the right time for it, it is topical, and it is our duty as custodians of the land to take care of all scarce resources.” Karin further suggested attending summits and symposiums, like the recent Irrigation and Water summit attended by FruitLook.

What would the best channels be to communicate with users?

“I think what you are currently doing is very effective. The regular updates via Email and YouTube about the training etc. are very good.”

How can FruitLook be used in the context of regenerative farming or climate-smart farming?

“The principles in FruitLook apply for anything that grows. Those principles are universal across commodities, in terms of how much water is used, how effective you are irrigating, etc. It is good that FruitLook is not only for one commodity.”

This article was published with consent from Blue North and eLeaf, and with recognition to the Western Cape Department of Agriculture for subsidising the project.