To counter the problem of load shedding and to encourage sustainability, farmers are going solar, which is good. But solar on the water is even better, Gerrit Rautenbach discovered.

On the one hand, SA’s national electricity supplier is primarily using the foulest energy source imaginable (read: not green and non-sustainable) to supply what once was the cheapest electricity but which has escalated by 177% over the last 10 years, and on the other hand, they are battling to keep the lights on. 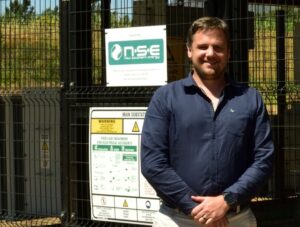 They say agriculture in SA is challenged due to the water issue, but what we are not challenged with is a lack of sunshine. The energy of sunshine is electric. It can, and should, become the primary source of energy in this land. It is abundant and it is green. Please leave our Wild Coast alone.

“About three years ago we decided to become more sustainable as a business,” Carl van der Merwe, managing director of Boplaas 1743 Landgoed on their farm, Marlenique Estate in Simondium, begins to explain. “Solar energy was top of the list.”

Marlenique is a 150-ha citrus farm with a packhouse and de-greening tunnels, many pumps along the Berg River, a catering venue for 350 people, offices, and a lot of people residing on the farm. All these aspects need electricity to operate.

They had a block of old Rosemary pears that were not suited for the area and this hectare became the home of the first rows of solar panels. “I decided to go for 90% green energy which is 600 kW peak per day and still be a grid power user.”

The ultimate goal is to go off the grid, but presently the farm is still linked to Drakenstein Municipality. They are using the municipality as their “battery”, meaning all the green power that they do not deplete in a day, they sell back at the best possible price. Mostly they get 70c/kWh they put into the grid but pay an average of R1,17 when they buy back again. “That’s why we are considering battery storage to compensate the price difference,” Carl explains. 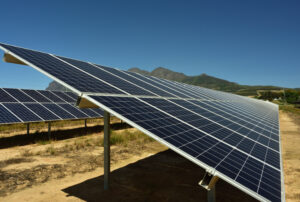 Load shedding causes havoc everywhere, but Carl is a man of solutions. The thing is, the solar power is direct current (DC) and Eskom is alternating current (AC). The inverters inverting the DC to AC run on Eskom’s AC, so when load shedding kicks in, the inverters stop. Or used to. Then it’s over to the massive generator burning diesel like crazy to keep the farm and business going while the solar energy goes nowhere.

However, what makes Marlenique even more special is that they are pioneers in Africa when it comes to floating solar panels. Some time ago, Carl attended a presentation by Mark and Spencer on sustainability and going green. In the corner of one slide was a picture and description of floating solar on a dam. He showed this to New Southern Energy (www.newsouthernenergy.com) and they started doing research and sourcing.

The advantages are endless. First of all, evaporation is going to be less, and it makes theft a lot more difficult. Both these issues are serious issues in SA. It also looks to Carl that, at present, they are achieving 10% higher production compared to panels on dry land, because the process takes place in a cooler climate, being surrounded by water. Another great advantage is that, by using your dam as a surface for solar panels, you do not sacrifice arable land.

Due to Marlenique being the guinea pig, Stellenbosch University, under the leadership of Dr Arnold Rix, is going to erect a complete weather station and in collaboration with IFE, a Norwegian research institution, they are planning to do a complete research study of floating solar vs. land mounts.

Seeing that SA is blessed with super sunshine almost year-round, damming up on solar power makes so much sense. Not only for farmers but for all energy users.