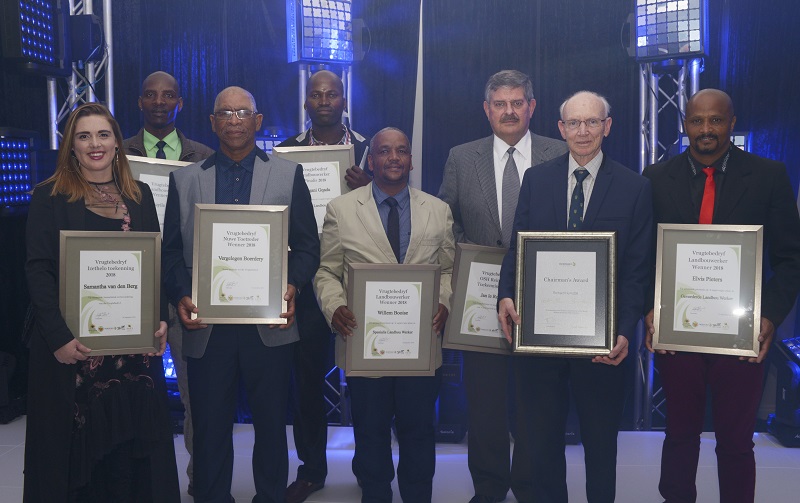 Four people received awards for outstanding performance working on deciduous fruit farms specifically and three for their direct and indirect contribution to the industry:

Sivuyile Panya from Kromfontein in the Koue Bokkeveld received the merit award for General Agricultural Worker of the Year for his exceptional work ethic and orchard skills. Panya is an all-round, outstanding orchardist and was also Kromfontein’s Fruit Picker of the Year with a phenomenal 9 296 picking bags to his credit, despite the drought. Panya also out-performed his co-workers when it came to pruning. He pruned an average of 55 to 60 trees a day. According to his manager Johan van Schalkwyk, it is an incredible achievement when the environmental terrain in which he works is taken into account. “Panya stands out in everything that he does and does everything with a smile.”

Willem Booise Production Manager at Bergendal near Citrusdal received the Specialist Agricultural Worker of the Year merit award for his exceptional agricultural knowledge and leadership skills. Booise who has worked at Bergendal for the past 23 years started as a general worker. Today, he is in charge of 138 orchard hectares and oversees the orchard monitoring, irrigation and fertilization of all the production units. He also manages more than 300 agricultural workers and their team-leaders to ensure that quality work is delivered. Over the years, Booise has completed several training courses to improve his agricultural skills. Among other things, he undertook the learning of isiXhosa to better his communication with seasonal workers. Booise is also an active community leader and serves as a trustee of the Bergendal Employee Trust. According to Potgieter van Zyl from Bergendal, Booise’s years of experience, dedicated interest and attention to fine detail are worth his weight in gold.

Elvis Pieters from Rietfontein in the Koue Bokkeveld received the Advanced Agricultural Worker of the Year merit award for his extraordinary work, strong personality and good teamwork. Pieters who was born on Rietfontein, cut his agricultural teeth by farming with vegetables and livestock. He moved to fruit cultivation in 2012 and within a short period of time distinguished himself in the industry. Pieters takes advantage of all the training opportunities offered to him, which he then gives back with passion and enthusiasm to the community. When it comes to his work Pieters is strong-willed, dutiful and responsible, and handles work pressure with ease. Pieters is also eloquent with a good sense of humour and regularly acts as a master of ceremonies at community events. He is also a leader in several community projects. According to Pieters, nothing can compare to the production of a Golden Delicious apple – “these trees talk to me and when I smell the apples, I feel good”.

Vergelegen Boerdery in the Breederiver Valley received the Novice award for their exceptional performance as a new entrant to the deciduous fruit entity. Vergelegen showed what can be done when beneficiaries of land reform are serious about agriculture and have the right support and partnerships. There are currently seven trusts with shares in the company that packs 250 000 cartons of table grapes every year. Vergelegen plans to expand to a hundred hectares of table grapes by 2020 and to develop the pack house facility to handle 500 000 cartons annually. The management of Vergelegen Boerdery acknowledges the help and advice they received from commercial farms. This inspires them to reach even greater heights.

Buks Nel, a varietal expert at Tru-Cape, received the Innovation award for his long-standing technical contribution to the deciduous fruit industry; his astonishing entomological knowledge; his passion for fruit varieties and for the discovery of Bigbucks/Flash Gala apples. Nel loves to share his exceptional knowledge of the life cycle of pests and diseases in the deciduous fruit industry with producers. And is the go-to-person when advice is needed. He also authored two books for the industry: Deciduous Fruits and Vines – Pests and Diseases and Their Control; and with Henk Griessel co-authored Apples in the Early Days at the Cape. Nel also discovered the variety clone in the Gala apple family, Bigbucks.

Jan le Roux, head of the Le Roux Group, received the Frontrunner award for his leadership role in the agricultural sector over a period of 30 years. He has served on several committees and boards and played an important role during the deregulation of the industry in the 1990’s.  In the field of black empowerment in agriculture, Jan le Roux took the lead in 1994 by focusing on ‘sustainable job creation that made financial sense’. Wheat farms outside Wellington were purchased and converted into successful stone fruit and table grape farms, additional work was created when a cold-storage facility and a pack house became operational. In 2004, a further milestone was reached when 32% of Broodkraal Estate’s shares were sold to the workers’ trust. The previously disadvantaged workers of the Le Roux group are all beneficiaries of the trust. The Le Roux Group currently employs more than 4000 permanent and seasonal workers.

Samantha van den Berg received the Izethelo media award for agricultural journalism. Van den Berg is currently editor of the Landbou-Burger. She is being described as an active agricultural journalist who manages close relationships with the industries and is always on top of the latest issues and news. Her professional manner ensures that she delivers quality content creatively.

Richard Hurndall received the Hortgro Chairman’s Award for his 35-year service to the deciduous fruit industry.

In 2017, the deciduous fruit industry included 2 231 producers with a total turnover of R12,35 billion per annum. In terms of world production, South Africa ranked in the top ten for pears, in the top twenty for apples, apricots, peaches, nectarines and plums, and 64th for cherries. The deciduous fruit industry currently produces fruit on 79 912 hectares and ensures employment to 1.34 people per hectare.