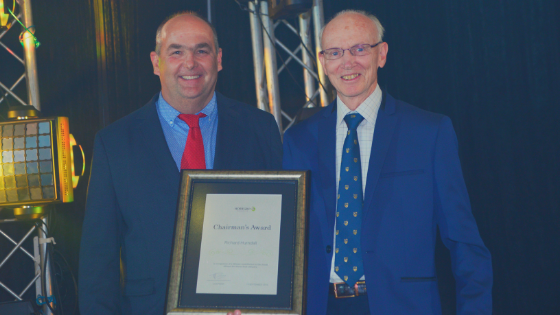 “We need you to start in January,” Gawie Roux said to his preferred candidate for the first SAAPPA Technical Manager post. The 29-year old gushed, “I can’t, I am getting married on 21 January.”

And so young Richard Hurndall started at SAAPPA in February 1983 to drive and implement maturity indexing in the South African pome fruit industry.  Thirty-five years later Richard’s footprints in the deciduous fruit industry are deep and impactful. Stan Smith who catalysed the process with his enthusiasm and drives to establish a fruit maturity lab would be proud of the impact that this initiative has had on the quality of SA fruit landing on the export shelves.

According to Hugh Campbell, Hortgro Science’s General Manager, maturity indexing has, since those early days, established itself as a standard practice. Richard’s drive to get the labs in Elgin, Ceres and the Langkloof commercially focused, saw the early use of computers and the development of the electronic pressure tester which was later commercialised internationally.  Hortec and other labs still practice Maturity Indexing 35 years later!

“It is difficult to measure a lifetime of facilitation, networking, and implementation, often behind the scenes without much fuss – just getting on with it,” says Campbell.  But if you take into context all that Richard accomplished, it is a lot. “Do you look at the growth and development of Forelle pears from the early days through the implementation of the 12 week storage to the FEMA programme built on the excellent research and innovation?

“What about the development of the URS colour charts where Richard cut out paint colour charts to match the colours – these are still seen as benchmarks in the industry.  One could refer to the technical handbooks that he has had a key role in: The yearly updated CA manual, the Pink Lady Technical Handbook, the updated “Guide to Deciduous Fruit”.  Dispensations; interaction with DAFF; leading the post-harvest research programme; chairing peer review meetings; finding alternatives for DPA; local market visits and “project rebirth”; rekindling and driving the Packhouse Action Group and CA Group. Oh, the installation of the latest CA technology at the university.

“Perhaps his final legacy is capturing all the scientific outputs of the Deciduous Fruit Growers from 1960 to the latest SA Fruit Journal in electronic format with abstracts which will be available on the International Society for Horticultural Science website for all to access,” concludes  Campbell.