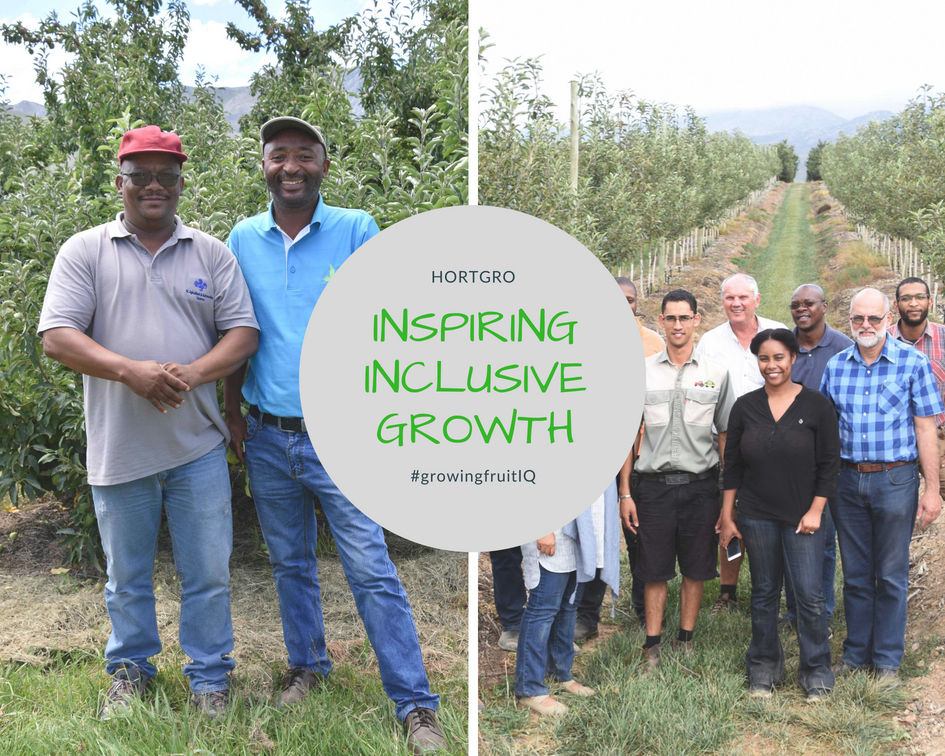 Over the past two decades, Hortgro has been playing a pivotal role in the transformation of the stone and pome fruit industry. In 2007, the association along with the Western Cape Department of Agriculture initiated the tree (or “boompie”) project which resulted in the establishment of 400 ha of pome and stone fruit orchards for emerging farmers in the Western and Eastern Cape.

In 2016, the industry became involved in the Jobs Fund, a National Treasury initiative to co-finance public, private and non-government organisations to create jobs and long-term employment. HORTGRO is using this funding to graduate smallholder farmers to commercial status by improving the productivity of existing orchards, increasing the number of new plantings, replacing old cultivars, assisting with production and production inputs and improving market access and compliance. The industry aims to establish and or replace another 316 ha of stone and pome fruit trees with this fund.

Anton Rabe, CEO of HORTGRO, said HORTGRO’ s transformation mandate was not only linked to the administration of statutory levies and regulations, but to act as a “responsible citizen”, which necessitates a pro-active role in economic development: “Land reform will never be addressed satisfactorily, if we as an industry body do not take responsibility and become involved in the process.”

The association’s support, however, goes further than these two programmes, involving various other initiatives with the private sector and the next round of Jobs Fund projects which will be based on loans. “Grants on their own, which formed the basis of the first round of the Jobs Fund, will not be enough to deliver lasting change,” Rabe said.

Peter Dall is part of the technical committee appointed by HORTGRO aimed at safeguarding the success of Jobs Fund projects. “I play an advisory role, ensuring that the right actions are taking at the right time for a specific farm, from soil mapping through soil preparation to the planting of trees and orchard management. My role, basically, is to ensure every cent is well spent,” Dall said.

One of the advantages of having Dall on the team is that he has years of industry experience during which time he has built valuable relationships. “Knowing the beneficiaries help to prevent people from feeling patronised or that I am telling them what to do. They know I am there to help them,” he said.

Dall sees the Jobs Fund as a great initiative, serving as an excellent stepping stone to get new entrants in the fruit industry, but feels there should be a greater emphasis on business development and market linkages in programmes: “There is a strong focus on skills development and training in the programmes, even business development, and management, but I feel this should receive greater priority. When you look at these programmes, it is the farmers who are linked with strategic partners, such as Stargrow and Two-a-Day, or mentors, who reap the most fruit from the initiative.”

Ben de Villiers’ involvement in the programme started with the writing up of business plans and he has since been appointed along with Anton van Zyl as a technical advisor. “My and Anton’s role is a little more hands-on than that of Dall’s, with us visiting our allocated farms at least once a week to support producers,” he said.

De Villiers sees his role in the programme as to help beneficiaries become financially independent: “The beauty of the Jobs Fund initiative is that a lot of effort is being put into ensuring the farmers’ success. It would be wasteful to merely throw money at projects without there being a chance of the projects becoming profitable.”

He identified farm management skills as one of the weaknesses for some beneficiaries: “Most of the beneficiaries grew up on farms, so they have a good idea of what farming entails. Managing production and ensuring the right thing happens at the right time, or managing inputs, finances or staff are however new to many.”

“On the bright side,” he said “the beneficiaries are passionate about farming and in most cases, this is all they want to do. It is great working with people, who are working hard to fulfill their dreams.”

Van Zyl agreed with De Villiers: “The great thing about being part of the Jobs Fund initiative is that it is not just about putting numbers on farms, but aimed at creating competitive commercial farmers. This is important because fruit has to comply with market standards to be sold. The market is not going to buy fruit just because of the skin colour of the person who produced it.”

One of the challenges identified by Van Zyl was the absence of a “one size fit all” solution: “Solutions have to be tailored to the unique conditions of each project. You cannot replicate what you do for one farm on another, there are too many variables influencing the success of a farm.”

He also emphasized the importance of strategic partnerships: “Making it as a fruit producer is hard, but even more so when you are a new entrant. Fortunately, fruit farmers are known for their willingness to help others succeed.”

Ismail Motala is the chairperson of the Deciduous Fruit Development Chamber, the transformation arm of HORTGRO: “The Deciduous Fruit Development Chamber helps to facilitate transformation in the pome and stone fruit industry, by giving direction, advice, and networking between beneficiaries and various role-players. Our vision is to double pome and stone fruit production in South Africa by 2050 and while doing this, we want to ensure the industry becomes more transformed from the farm throughout the value chain.”

According to Motala, there is a lot of pressure on the industry to accelerate transformation because of talks over expropriation without compensation and companies who want to improve their BEE scorecards. “There is a lot of positive sentiment and good intentions in the industry. Many white commercial farmers want to become involved in transformation but do not know how.”

“We want to show these farmers that they can get involved without losing their farm heritage. The thing about transformation is that there is not a blueprint for success, but the deciduous fruit industry is extremely innovative and finding sustainable solutions as we go along,” he said.

Motala identified the drought and access to funding as major obstacles to change at the moment: “The drought is keeping us back, making it difficult to reach our planting targets, while access to cash is hindering the growth of new farmers. The Jobs Fund creates a growth path for the new farmers, so it is important to keep that momentum.”

He blamed the cost of credit and the absence of credit security as the main reasons why new farmers struggled to access production loans: “We need financial institutions to re-evaluate the way in which money is borrowed to farmers, to make production loans more accessible to new entrants.”

Motala said it gave him pleasure to be part of the Jobs Fund initiative: “People need to understand that the fruit industry is not going to change overnight, but it is happening and I know we are leaving a legacy for our kids in the process.”