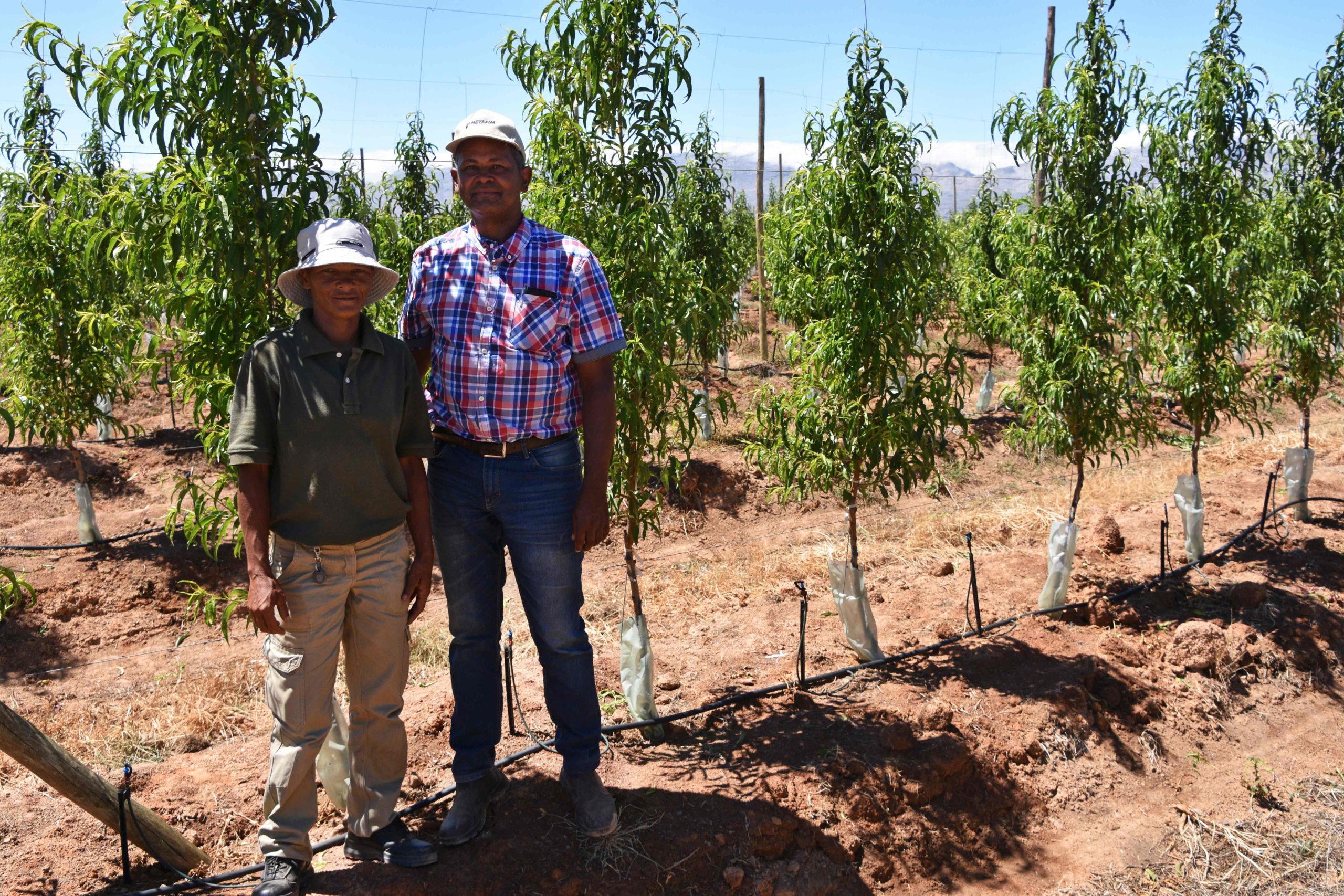 The English poet John Donne wrote four hundred years ago, ‘No man is an island’. This adage rings particularly true for Raymond Koopstad from La Vouere farm in the Ceres Valley. His journey into agriculture took many turns, but it was through strategic partnerships that things really started to blossom.

Raymond and his wife Mary have been farming on La Vouere since 2003. He originally purchased the 110ha farm with government LRAD funding and thirty members of the La Vouere Trust.

Many of the original trust beneficiaries were members of Raymond’s extended family and with funding from the Western Cape Department of Agriculture, the Trust planted their first peaches in 2004. The project was successfully mentored by Adrian Wolfaardt of Verdun Estates in Prince Alfred Hamlet.

Although the project started well, the farm faced many challenges. “After some difficult years we realised that our business model was not sustainable,” explains Raymond. “We either needed to sell the farm or grow in a new direction.”

In 2015 they restructured the business completely. Raymond and Mary bought out the other shareholders and parted on good terms with them. A new company La Vouere (Pty) Ltd. with Raymond and his immediate family as shareholders were born.

Also during that time, the Witzenberg PALS project was launched. PALS was initiated by a group of commercial farmers in the Witzenberg district that wanted to reach out to black farmers in the area to assist with successful transformation of the fruit industry. The project’s objective was to form commercial partnerships with black farmers to assist them through mentorship, training, linkages with the market and other support systems to successfully grow their businesses. “Our business is also involved in the PALS initiative”.

It was at PALS that Raymond bumped into his previous mentor’s son, Peter Wolfaardt. “Because of my relationship with his father I approached Peter about our plans to restructure the farm. One thing led to another and after a few months, we formed a partnership on both the production and marketing level. The partnership is called La Vouere Stonefruit. (Pty) Ltd.  with La Vouere (Pty) Ltd as the majority shareholder that provides the water and the land to the partnership and the minority shareholder is Verdun Estates that provides packing infrastructure, marketing, technical and administrative support towards this partnership.

“Our family has developed a very good working relationship with Raymond and Mary Koopstad over the years,” says Peter Wolfaardt about this joint venture. “We were motivated to promote successful agricultural land reform in our area and the Koopstad’s, therefore, presented the ideal candidates with whom we could form a partnership. Our family has been farming in the region for decades and this is the first time we have established a business relationship with someone from outside our family. We are excited about the future of this business partnership and see this as a potential template for future agricultural partnerships aimed at promoting land reform,” he added.

Peter helped Raymond with water and soil analysis, budgets as well as orchard and variety planning.

In the meantime, Raymond received a grant from the Western Cape Department of Agriculture’s Commodity Project Allocation Committee (CPAC) which is managed by Hortgro. “This was a well-timed and helpful capital injection earmarked for infrastructural upgrades. We also applied for Jobs Fund funding and by the time we got the green light all the preparation work had been completed.

We were able to plant 15 hectares of mostly export variety nectarines in August 2017,” Raymond explains. “The trees have grown very well and we expect our first harvest in November 2018. The fruit will be packed and marketed through Verdun Estates and their established marketing channels such as Stems, a South African Stone Fruit supplier to premium local and international markets” and programmes with Woolworths and other local retailers.

Raymond points out that the partnership with Peter Wolfaardt, a grower with pack house infrastructure and established marketing agreement with an experienced export company, was an invaluable asset to their business. “We are able to grow the fruit successfully and at the same time access these vital services needed for the financial success of our farming business.”

“Our farm is 110ha in total and we have the ability to establish 50ha of orchards in total. During 2017 we established 15ha and during 2018 we plan to plant a further 4.5ha. Looking ahead, during 2019 and 2020, we plan to plant a further 15ha in each of these years so at the end of 2020 we aim to have a unit of 50ha. This expansion is also creating jobs in the area. We have 19 people working on the farm and once we are fully established we expect to employ 44 permanent employees.

“Some local skeptics frowned when we started planting these orchards while it is so dry but as the trees have received the water and nutrition that they needed for successful establishment they have flourished. In order to assure our water security, I have taken a commercial loan to buy an additional piece of land with a good water allocation which has made it possible for us to expand our orchards to 50ha.

“The timing and current circumstances have worked out very well for us as the partnership, CPAC funding and Jobs Fund funding approval have made it possible for us to not only turn around our farming operation but to kick start a thriving farming business.

“I am positive and excited about our business and prospects for the future. Our children are very excited about the change in our family’s circumstances. We have three children and my 21-year-old son Rainier is already helping me in the business. My wife and I realise that success is only achieved through hard work. We are establishing a business for our children and grandchildren and building a reputation as a family within our partnership.”

Hectares currently under production: none