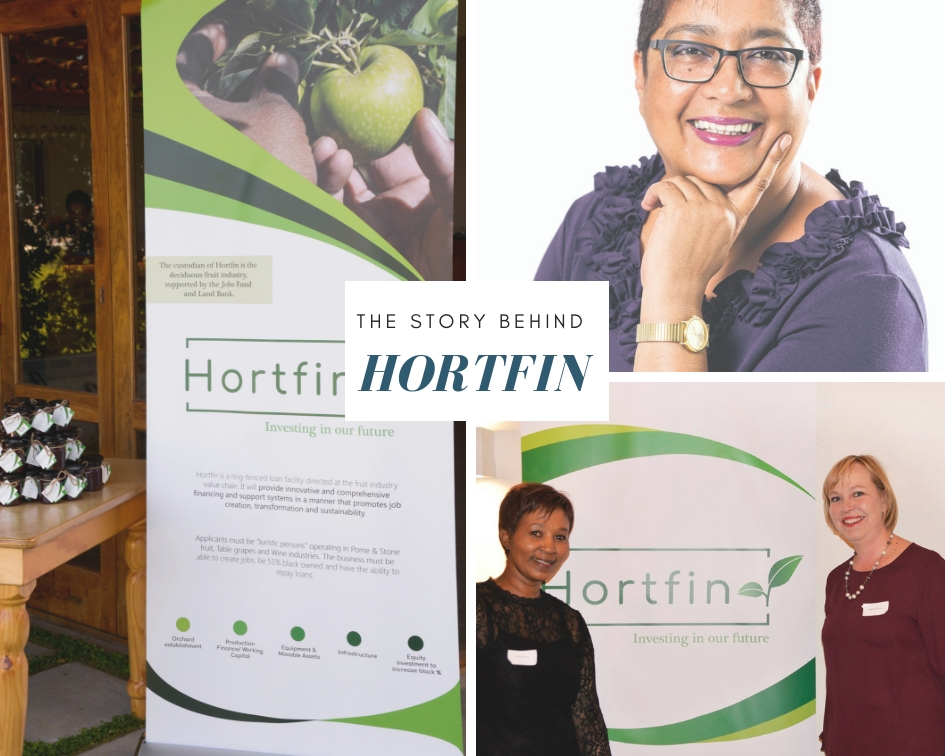 The South African deciduous fruit industry, the Jobs Fund, and Land Bank recently launched Hortfin – an R600 million ring-fenced debt fund aimed at providing innovative and comprehensive financing and support systems in a manner that will promote job creation, transformation and sustainability throughout the value chain in the fruit and wine industry.

The concept started, however, quite some time ago with a partnership between like-minded individuals and entities with a “can do”, in fact, “a have to do differently” attitude. The successes with the deciduous fruit “boompie planting project” started in 2009 between the Western Cape Department of Agriculture (WCDA) and Hortgro and a second phase linking the initiative with the Jobs Fund, have established more than 800 new hectares with a production value in excess of R7 billion over the lifespan of these orchards. This would not have been possible without the out of the box thinking of WCDA HOD Joyene Isaacs and her senior management in alliance with the management of Hortgro.

According to Mariette Kotzé, group operations manager of the deciduous fruit producers association, Hortgro, the purpose of the initiative is to fast-track economic development within the pome fruit, stone fruit, table and wine grape value chains, by building on existing programmes such as the commodity approach, the Commercialisation Programme of the Deciduous Fruit Development Chamber (DFDC) and various other initiatives.

The programme will nevertheless struggle to succeed without a strong dependable support structure and partners, with the Western Cape Department of Agriculture being one of these key partners in association with the commodity bodies. “People often complain about poor performing government departments, but the Western Cape Department of Agriculture is definitely not one of these. As a matter of fact, the Department is a leader that over-performs in almost everything it puts its hand to,” Kotzé says.

The Department has over the years developed internationally recognised programmes and interventions to, amongst others, buffer the impact of climatic change, increase the resilience of small-scale and commercial farmers and create an enabling environment for successful land reform and economic development. “The Department is definitely leading by example,” Kotzé says.

So what is the source of the Department’s success? According to Mogale Sebopetsa, chief director of the Farmer Support and Development at the Department, they realised, a long time ago, that it could not transform the provincial agricultural industry on its own. This realisation has led to their adoption of a commodity approach, where strategic partnerships are formed between the Department and key commodity organisations and various stakeholders, to build on the strengths and overcome weaknesses in one another’s armour.

“By pooling resources, such as funding and expertise, and using a commodity approach, we are able to better strategize interventions, avoid the duplication of services and ultimately get better returns on investments that would have been possible if programmes were run separately,” Sebopetsa says.

While Hortgro and various other stakeholders played an invaluable role in the creation of the Hortfin fund, those who know argues that none of this would have happened if it was not for the foresight and innovativeness of the Western Cape Department of Agriculture.

The Department has on several occasions initially contracted a team, led by Stephen Hobson of Agrifusion, to coordinate the Concept Note application phases for the various Jobs Fund applications on behalf of the Department to assist in attracting additional investment. A number of industry bodies, such as Hortgro, government and parastatal organisation and businesses in the food value chain were assisted in this manner and then empowered to take the initiatives to its full conclusion.

“The Department took the early initiative and acted as a catalyst, which enabled many businesses in the Western Cape to leverage their resources and access money from the Jobs Fund,” Hobson says. He clarified that the Department paid and assisted companies to submit their first phase Concept Note, after which companies were responsible for the cost of the detailed business plan applications.

In the fruit industry, this led to the approval of funding for the “boompie” project in 2009, through which the Department in partnership with the Deciduous Fruit Development Chamber established over 350 ha of pome and stone fruit on farms of emerging producers in the Western Cape.

The success of the “boompie” project paved the way for the DFDC Commercialisation Programme, an initiative between the Jobs Fund, Western Cape Department of Agriculture and Hortgro Pome and Hortgro Stone.

For this initiative, National Treasury granted R60 million, matched by R40 million from the Western Cape Department of Agriculture and R20 million from HORTGRO, to establish 316 ha of stone and pome fruit trees and to graduate smallholder farmers to commercial status – by improving the productivity of existing orchards; increasing the number of new plantings; replacing old cultivars; assisting with production, mechanisation, infrastructure; and improving market access and compliance.

Thanks to these initiatives, over 200 ha have so far been planted in different regions, while over 100 permanent jobs and 800 seasonal jobs have been created in spite of extremely difficult conditions caused by the drought. More than 400 people have also received training to improve their farming and business skills.

The final approval of Hortfin also originated from the initial support provided by the Department and the avoidance of the shortcomings of other projects.

Sebopetsa sees the Hortfin Fund as an important development, as it has the potential to overcome the limited access to blended finance, by making it easier for +51% black-owned businesses and previously disadvantaged farmers to acquire loans to finance production costs and expansion. This has traditionally been a great obstacle, especially when the land on which they farm still belong to the government and cannot be used as collateral.

The Hortfin Fund has the ability to absorb relatively greater risk with relatively less security than traditional loans that are currently available in the market. There is also flexibility in the structuring of the financial products with an optimum matching of cash flows to repayments, with comprehensive post-investment support and pro-active technical, management and financial assistance.

Sebopetsa said it was rewarding to think that the Hortfin Fund was approved and funded by the Jobs Fund, due – in no small part – to the role played by the Department.

Deciduous transformation at a glance: