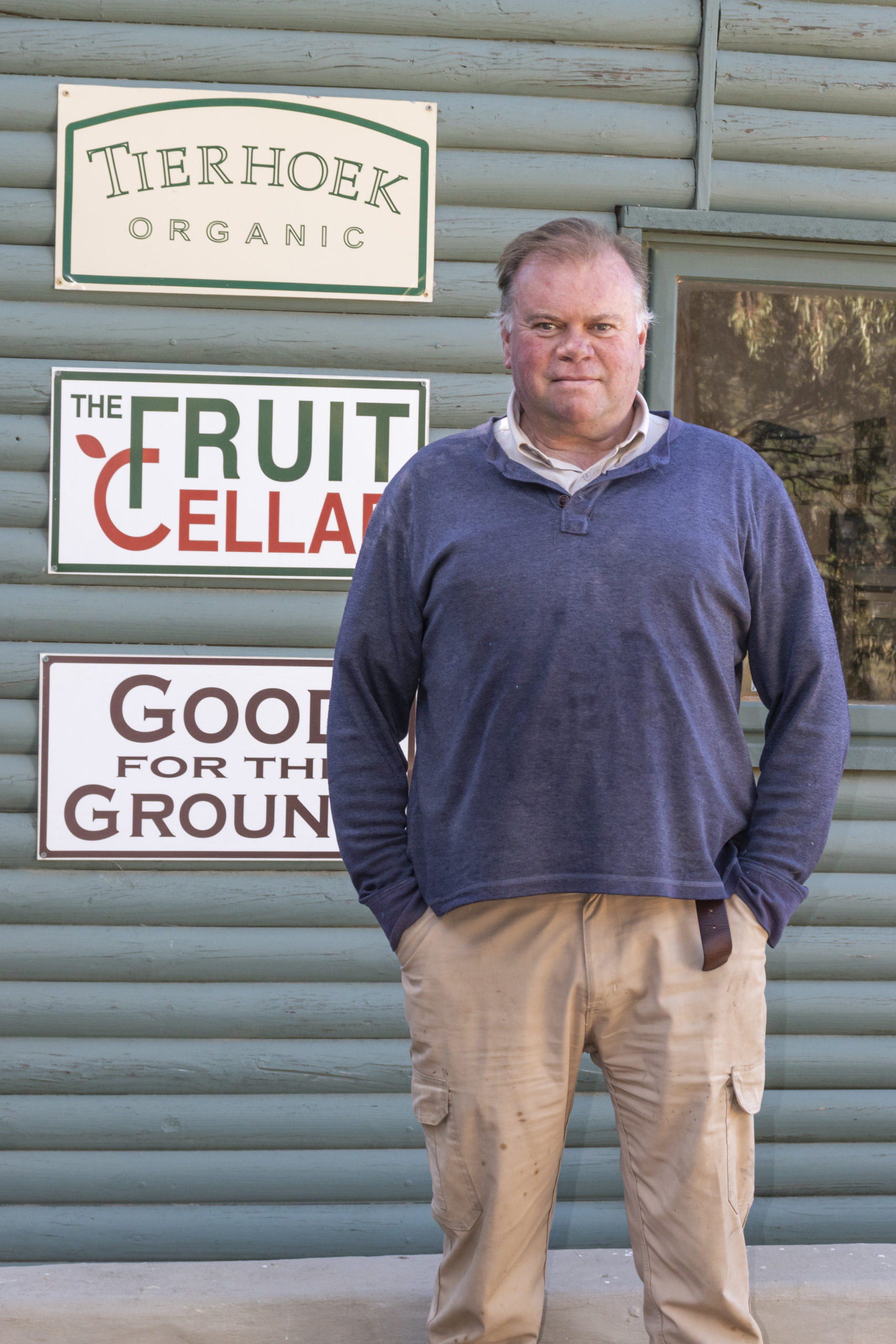 Good things are said to be hard to find — and this is certainly true of organic growers of deciduous fruit in South Africa. Consumer demand for organic food is rising, so why are so few producers taking up organic farming? We visited Tierhoek Organic Farm just outside Robertson, and spoke to Bruce Gilson about the challenges and rewards of organic farming, and why he is hanging on to his pigs — but the cows must go.

Tierhoek Organic Farm consists of the farms Tierhoek and Spaarkloof, tucked into a fold of the Langeberg Range. Bruce and Alison Gilson bought Spaarkloof in 1998, and Tierhoek in 2002. Together the farms cover 1500 hectares, including 1000 hectares of the surrounding mountains. Only 30 hectares are suitable for cultivation.

The Gilsons took over Spaarkloof as a working stone-fruit farm. They soon realised that the existing business model — growing apricots and peaches for canning — was not financially viable. Bruce Gilson saw an opportunity in the expansion of organic farming in Europe. Besides potential export markets, Woolworths was also extending its organic range.

“We started off exporting our organic apricots, to Waitrose, and selling our yellow cling peaches to Woolworths,” recalls Gilson, “and it worked fantastically. But we just didn’t have enough stock, and there were no other organic farmers, so there wasn’t enough supply.”

Back then, Tierhoek Organic Farm had 4 hectares of apricots, as well as smaller volumes of other fruit. “We realised that, as a small farm, we needed to find our own markets,” says Gilson. They began to deal directly with retailers, including owner-managed Spar branches, and with specialised markets, such as organic produce-box schemes. Sales of fresh apricots and tomatoes to Spar branches remain an important component of their operation.

The next challenge, according to Gilson, was waste. What could they do with fruit that was unsuitable for fresh consumption?

“We got dehydrators, and we dry it,” says Gilson. “That part of the business has grown tremendously.” Their product initially gained market share because it was organic. But it was also sulphur-free — that turned out to be the key to success.

The demand for sulphur-free dried fruit soon outstripped the supply of organic fruit. “We’ve started another label, called The Fruit Cellar, which is conventional fruit that we buy in and dry without sulphur,” explains Gilson. “We still have our organic range, but we’ve been able to expand to include things like blueberries and strawberries. We have fruit coming in from other areas when we don’t have our own.”

The Gilsons have also diversified by renting out cottages on the farm, mainly to Capetonians seeking a few days of tranquillity. The cottages are an important source of income, given the relatively small area of the farm that is suitable for cultivation.

The main fruit type at Tierhoek Organic Farm is still apricots, as apricots naturally do well in that area. In addition to 6 hectares of apricots, the Gilsons also have 1–2 hectares of plums. “We’ve found that you need to go back to the old plum varieties when farming organically, like Angeleno, Songold, and Harry Pickstone,” says Gilson.

Other crops include 1–2 hectares of tomatoes, 1–2 hectares of mangoes, and 2 hectares each of quinces, lemons, and olives. “We don’t have big orchards because we have to be able to handle and market everything ourselves,” comments Gilson.

Tree nutrition is a major constraint in organic farming — synthetic fertilisers are not allowed. Gilson applies liquid guano through the irrigation system to provide nitrogen. The guano has to be harvested from sustainable sources. For Tierhoek Organic Farm, this means importing guano from Namibia, where it is scraped off artificial platforms that were specially built to attract roosting seabirds.

Compost tea — a liquid extract from compost — is also applied through the irrigation system, and as a foliar feed. “We make our own compost because I want the microorganisms from our farm in the compost tea,” says Gilson.

Animal manure is considered organic if it has been composted at temperatures of 65°C–70°C. Besides incorporating manure from his sheep in his own compost, Gilson buys compost from a local manufacturer.

For mulch, he chips old trees and woody prunings. “All trees are planted with compost, and we keep their compost and their mulches going in the first three years. In the older orchards, we start relying on just the natural vegetation,” notes Gilson, “and when we prune the tree, that goes on the bankies.”

Natural vegetation provides mulch when it is mown and blown into the tree rows. This is preferable to cover crops, which would have to be sown from organic seed. If the organic seed isn’t available, the grower can apply for permission to use non-organic seed, but it must still be certified as not genetically modified or chemically treated.

Besides the hassle of sourcing seed, Gilson points out that sowing cover crops mean disturbing the orchard soil, thereby losing the organic matter that he has carefully built up over many years.

Tierhoek Organic Farm has sufficient water from mountain springs and boreholes. Nonetheless, Gilson has transitioned to drip irrigation in the younger orchards, because it’s more efficient. He has also found that drip irrigation reduces weeds on the bankies, which is useful as organic farmers are not permitted to spray weedkillers.

Pest and disease control options are likewise restricted. One advantage of being in their own valley, says Gilson, is that pest pressure is low. “We don’t get false codling moth or oriental fruit moth, and fruit fly is not a big problem. We can use spinosad, and we do bait for fruit fly throughout the year.”

Gilson is able to control diseases by applying copper compounds during winter, and sulphur compounds during summer. He is pleased to see that the range of organic and biological control options offered by the agrochemical companies is increasing. But, he cautions, the level of damage has to justify the cost of control.

One advantage that Tierhoek Organic Farm has over conventional farms is pollination. “Pollination has never been an issue,” says Gilson. “I don’t even bring bees into the orchards. During springtime, it’s alive with bees and not just honeybees.”

Besides a wealth of pollinators, the farm is home to livestock. A small flock of sheep earn their keep by providing manure for the compost heap, and pigs consume the waste from the fruit-processing facility and from a neighbouring brewery. The cows, however, are on their way out. “They break everything — taps, trees, fences, everything,” complains Gilson.

Cow troubles aside, the biggest challenge for organic farmers, according to Gilson, is the market. Under South African conditions, the lower yields of organic orchards compared to conventional orchards can translate to higher prices for consumers, and not many local consumers are able to afford to pay a premium.

On the other hand, volumes of organic fruit are far too low to interest overseas markets. Gilson emphasises that more support from local supermarkets is essential in encouraging farmers to go organic.

“That’s what stops people who get very keen about organic farming — they suddenly realise they can’t sell their products,” says Gilson. “But the market is growing. And there’s a mindset change in farming as well. There are so many things that people are now doing in conventional farming that has been standard practice on organic farms — for example, mulching and compost.”

Ultimately, Gilson farms organically because he believes in the stewardship of the land. “Our business has to be sustainable. Alison and I are only here for maybe forty or fifty years, then we’re gone. We have to look after the land.”