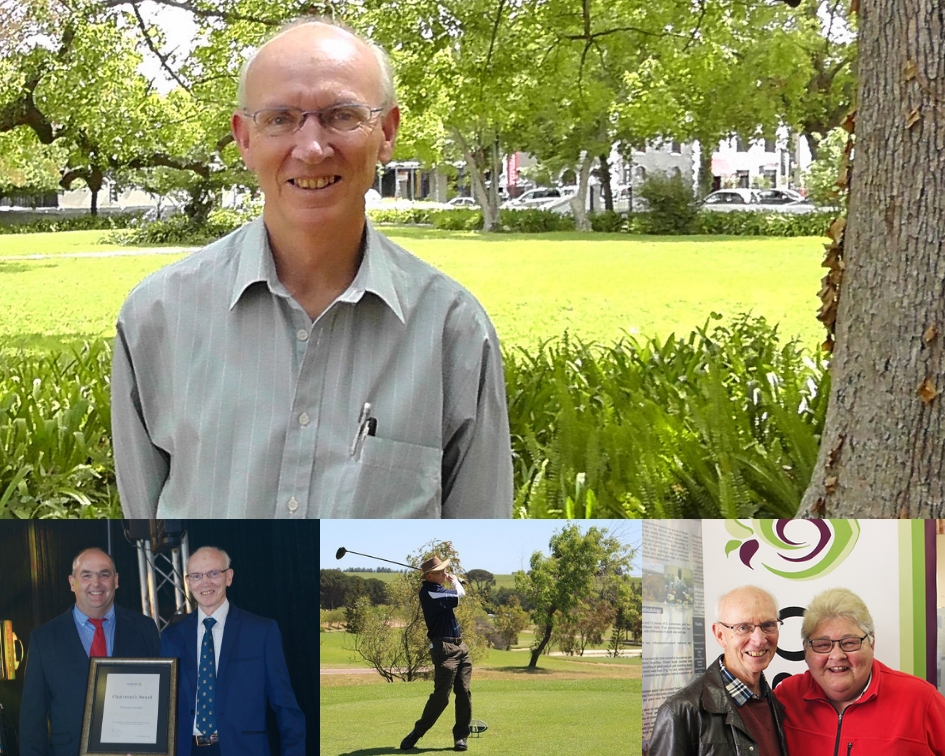 Richard Hurndall recently received the Hortgro Chairman’s Award for 35 years of service to the industry. He is also a squash master and believes in work-life balance. Elise-Marie Steenkamp spoke to him shortly before his retirement.

“We need you to start in January,” Gawie Roux said to his preferred candidate for the first SAAPPA Technical Manager post.

And so young Richard Hurndall started at SAAPPA in February 1983 to drive and implement the maturity indexing programme in the South African pome fruit industry.  Thirty-five years later Richard’s footprints in the deciduous fruit industry are deep and impactful.

As a boy, he was “fairly studious and somewhat sporty”. Traits that over the years have matured into the preferred “go-to-colleague” when you need advice about a wide range of topics, from squash to the latest CA technology. And anyone that has ever played golf with Richard knows that losing is not an option. He is steadfastly-determined. In work and play. With a strong belief in work-life balance. “It was a deliberate decision. After I completed my MBA, I had the option to work in Johannesburg for much more money, but the quality of life was important to me, and I wanted to stay in the Western Cape.”

The Hurndall family’s agricultural roots run deep. Norwegian by ancestry the first Hurndall set foot in South Africa somewhere around 1860. “They were angora goat farmers,” says Richard. His own parents were sheep farmers in the Karoo, Aberdeen District. The six-year-old Richard was sent to boarding school in Graaff-Reinet and spent the next 12 years of schooling there. He has a special connection with the Karoo and goes there at least once a year. “It’s spiritual,” he says. “A place where I can clear my head while walking in the veld, the mountains. When you grow up in the Karoo, you grow up with a gun. You start with a pellet gun and graduate to a .22 and as you grow older, a hunting rifle.” Every winter Richard and his sons go on a hunting expedition, on the one hand, to make sure that they have enough boerewors and biltong for the next year, and on the other, to rekindle childhood friendships. “I am still on the school reunion’s WhatsApp group.”

A keen student from an early age, Richard, enrolled in a BSc Biochemistry at Stellenbosch University because “It seemed like a good idea at the time.” He ended up in agriculture when he had to do research on apple flavour for Appletiser. For his trouble, he obtained an MSc in Chemistry.  “I subsequently applied for the position of Technical Manager for SAAPPA to run the maturity indexing lab in Elgin, and the rest is history!”

Stan Smith who catalysed the process with his enthusiasm and drive to establish a fruit maturity lab would be proud of the impact that this initiative has had on the quality of SA fruit landing on the export shelves. According to Hugh Campbell, Hortgro Science’s General Manager, maturity indexing has, since those early days, established itself as a standard practice. “Richard’s drive to get the labs in Elgin, Ceres and the Langkloof commercially focused, saw the early use of computers and the development of the electronic pressure tester which was later commercialised internationally.  Hortec and other labs still practice Maturity Indexing 35 years later.

It is almost impossible to confine Richard’s 35-year career to a couple of highlights. Richard says the commissioning of the development of an electronic pressure tester for more accurate fruit firmness testing and the electronic capturing of readings, was one achievement that stands out.  “The instrument was rated the best available by a foremost American researcher.” According to Hugh, one has to take Richard’s work into context: “It is a lifetime of facilitation, networking, and implementation, often behind the scenes without much fuss – just getting on with it.”

“Do you look at the growth and development of Forelle pears from the early days through the implementation of the 12-week storage to the FEMA programme built on the excellent research and innovation? What about the development of the URS colour charts where Richard cut out paint colour charts to match the colours – these are still seen as benchmarks in the industry.

“One could refer to the technical handbooks that he has had a key role in The yearly updated CA manual, the Pink Lady Technical Handbook, the updated “Guide to Deciduous Fruit”.  Dispensations; interaction with DAFF; leading the post-harvest research programme; chairing peer review meetings; finding alternatives for DPA; local market visits and “project rebirth”; rekindling and driving the Packhouse Action Group and CA Group. Oh, the installation of the latest CA technology at the university.

“Perhaps his final legacy is capturing all the scientific outputs of the Deciduous Fruit Growers from 1960 to the latest SA Fruit Journal in electronic format with abstracts which will be available on the International Society for Horticultural Science website for all to access,” he concludes.

Not to forget his interaction with fresh produce markets, and instigating the requirement of having cold storage facilities on the market floors. Also, the role he played in Project Rebirth – which provides the blueprint for the rehabilitation of fresh produce markets. 35 years indeed!

There are some serious challenges ahead for South African agriculture, luckily agriculture is driven by technology, and for this, you need a strong research base, says Richard.  “Research may seem expensive to fund, but is actually a sound investment if you consider the return on investment.  Take for example the Forelle Early Market Programme (FEMA).  Around 50% of Forelle is now marketed under this programme.  It has brought tremendous quality benefits and price stabilisation to Forelle over the marketing period, and the annual benefit to the industry probably exceed our total annual research budget.  I believe we need to make the next step-up to align our research investment with international benchmarks.”

Asked about any person in particular that influenced him work-wise? He does not hesitate, “Peter Dall was there from the very beginning, and he has provided great guidance and support over the years. I am much indebted to him.”

Over the years Richard himself has employed many young graduates and has seen them develop successful careers.  If he had to give young people advice today: “The opportunities are there if you follow your passion. Work smart, not hard.”