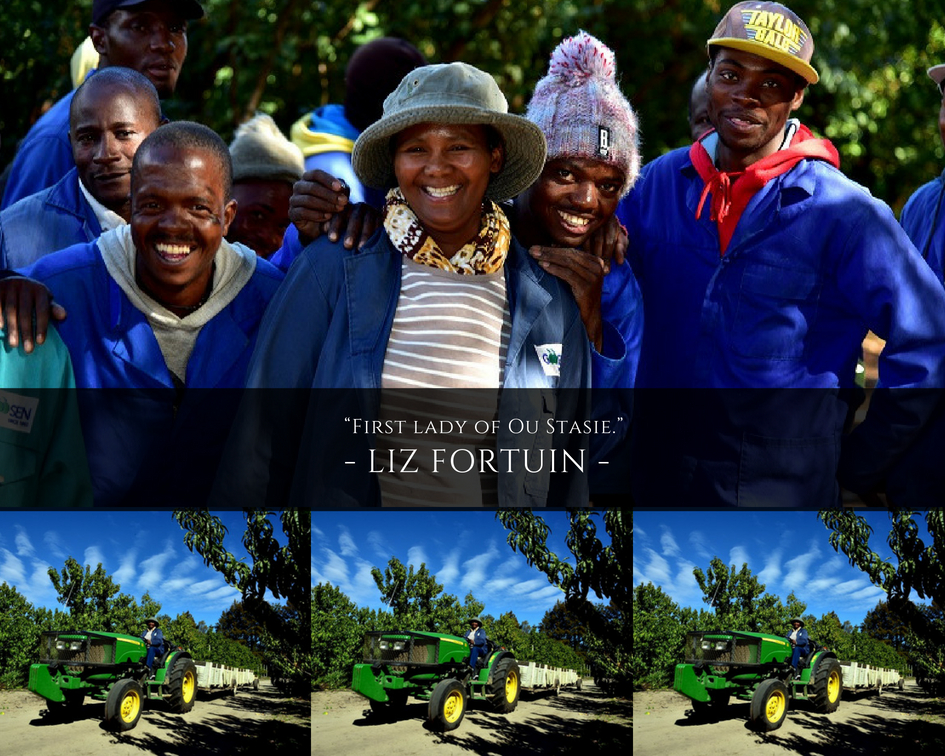 Where Mitchell’s Pass begins, just outside the town of Wolseley, you’ll find the farm Ou Stasie on your right. Peaches, pears, nectarines, and plums. It is on this farm, 41 years ago that a remarkable woman was born. Fortune favours the brave they say and eventually, Liz Fortuin managed to live up to her surname. She told her story to Gerrit Rautenbach.

Life was hard, but life was good. Kleinjan Goosen looked well after his people. At the age of 16, life really happened for the youngsters Liz and Moses Fortuin when they fell in love. And Liz fell pregnant. She had to leave school, but Moses completed his matric. Although Liz’s mom was there to help raise Marlon, the baby boy, Liz couldn’t go back to school. She became a working mother at the age of 17. She started off by doing general work.

“At first I knew nothing about farming. I didn’t really want to know. But after Marlon, I had to learn. And fast. AW Steenkamp was the manager then and Edward Adams a supervisor. They taught me how to pick fruit, to carry a picking bag, almost everything, except pruning.

“I still remember, one of the first things Edward got into my head was discipline. No matter how cold or wet, the starting time is the starting time. Lunch was an hour from half past one. Every day, twenty-five past two I was ready to fall in again.”

She was then promoted to the sapling team, learning to prune and nip. It wasn’t easy to learn, but she persevered. She also helped the other women in the team where she could. Helping other people has always been a big thing with Liz.

Just after she turned 20, Werner du Plessis joined Ou Stasie as general manager. And Liz’s life changed forever. He was the one that discovered her real potential.

“O yes, if only I could. But I have a child to look after. I must work. I need the money.”

“If you could study, what would you study?”

Clearly, it has always been about helping other people.

To help her change her mind, Werner made her supervisor of the sapling team. She started thinking maybe a future in farming is a good call after all. To clinch the deal, he enrolled her for NQF1(National Qualifications Framework).

One night at the college she found out about Adult Basic Education and Training (ABET), a system to obtain a matric. She, however, had to redo grade 11 before she could move on to matric. So while doing NQF1, she enrolled for grade 11. She passed both but did so well with NQF1, she was entitled to go straight to NQF4.

Monday and Tuesday nights were matric classes and Tuesdays NQF4. The class was from seven to ten in Ceres. Yet in the mornings she had to fall in with the rest. Harvest time it’s 6.30. Sharp. She was there.

Because the NQF4 syllabus focused on agriculture, it was much easier to do well with that than matric. Everything in the course was on the farm. And everybody on the farm helped her.  One big team of teachers. And then there was Rachelle Agenbag, the receptionist. While Liz wrote her assignments in longhand, Rachelle retyped them, fixing any spelling errors along the way. Danie du Plessis, Werner’s successor also sat with her for hours, helping her understand. She accepted all this help gladly and gracefully, deep down knowing her time would come to pay it forward.

Just after she obtained NQF1 in 2008, Werner promoted her to be the first ever forewoman of Ou Stasie. No mean feat. Up until then, she was working side-by-side with the guys. Suddenly she became their boss. And a threat. Her team was a mix of traditional men from various backgrounds, who didn’t take orders from women.

“What are you doing here? We don’t need you,” they’d threaten.

She told them that it wasn’t her choice to be their forewoman. Management promoted her. It was up to them what they were going to do about it. Take it or leave … If you ask her what swayed them, she’ll tell you it is her surprisingly loud corporal-type voice. Then, she’d laugh her soft laugh.

“No, actually it was just that, every time I saw somebody battling with something, and I had the knowledge, I shared it with him. I helped him, empowered him. Everything I have learnt studying, I shared with them. Slowly I won their confidence. Over time they realised that, by working with me, we all do better. But they’re still wary of my voice! For me, still, the best is to get someone new in the team. Someone that cannot prune a tree and you teach him. A few days later you stand back and watch him, saying to yourself: ‘Now that man can prune a tree’.” To help other people is still her biggest motivator. Today she is a forewoman in charge of three teams of 14 men each.

At the age of 38, 20 years later than her peers, but never too late for her, Liz got her matric – with an exemption. She got so used to the long hours and late nights studying, she wants to carry on.

“Maybe Law … who knows? I like the idea of defending other people.”

“God willing I might be promoted. Maybe even a manager. Going up in the ranks, you learn more. You get qualified to help other people more. But agriculture is a hard life. If you loose sight, you’ll fall out. Don’t try and be too clever. Learn. Every day you learn something new from someone.”

At 16 Liz Fortuin fell pregnant. Marlon was born. Moses Fortuin was the father. Her world could have collapsed right then and there. Today, at the age of 41, Liz and Moses are still together, married with two more sons, Colin and Ivaan. They are solid. Maybe one day, as she keeps on working herself upwards in fruit farming, she’ll end up with her own patch of land.

She never became a nurse. She is not a lawyer yet. But she is the first lady of Ou Stasie. And as long as she can help other people to be more than they ever thought they could be, it’s all good.

Things always work out the way they should…