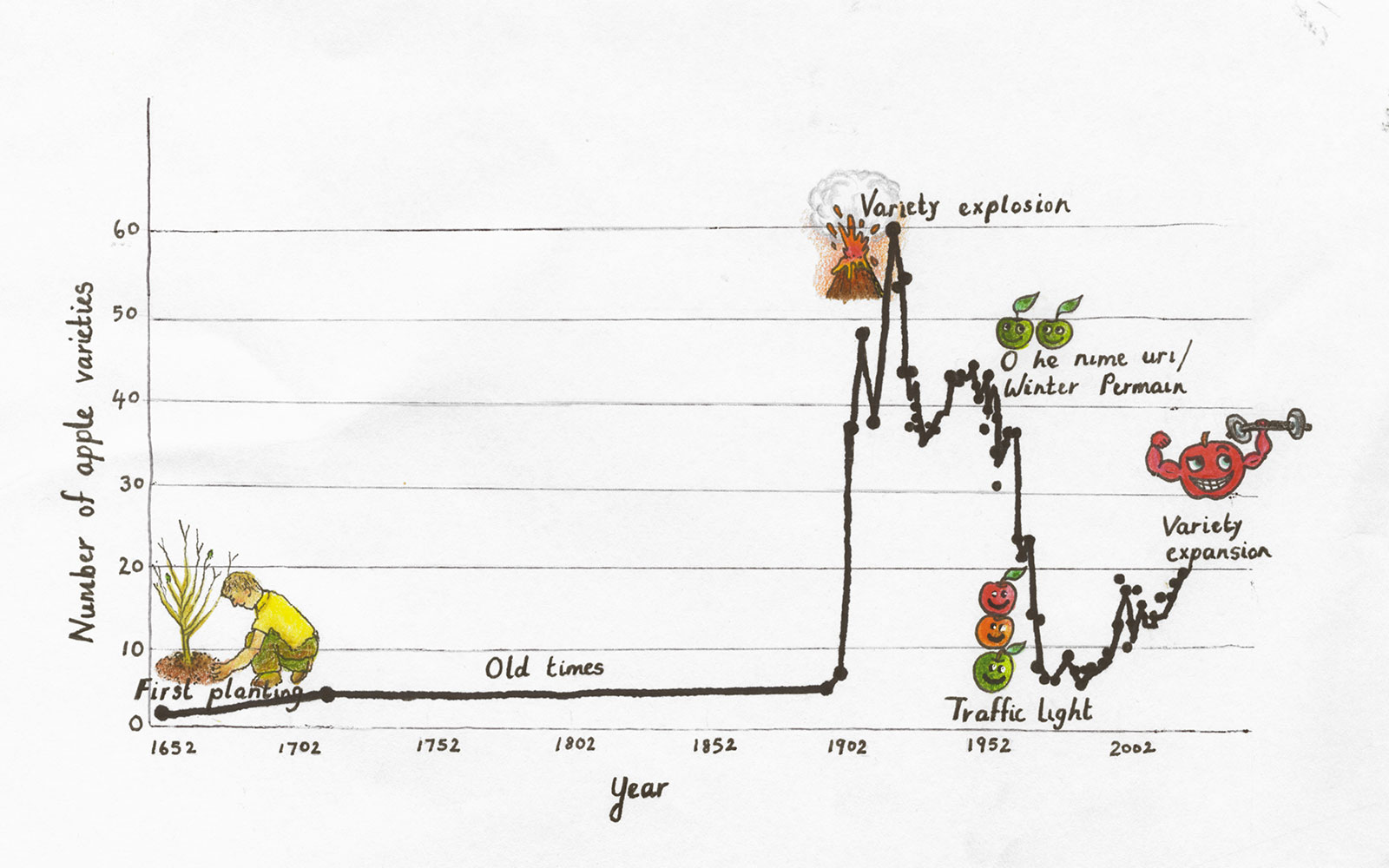 In this column about the history of apple varieties in South Africa, we will investigate and explore why some varieties succeed and others disappear.

The column will consist of extracts taken from a book by Henk Griessel and Buks Nel, The Newcomers and Their Friends, that was published by Tru-Cape early in 2020.

The authors cited “our deep concern for the preservation of the apple varieties present in South Africa and in the early days, and also those grown today” as the reason for the publication. “It is rather sad that most of these old varieties have all but disappeared and that hardly any effort was or is being made to preserve them for the future generations. Another disturbing fact is that so little has been recorded, especially locally, on this history of these varieties.”

Over the next couple of months sit back, and enjoy the stories about African Red, Drakenstein, Gala, Golden Delicious, Goldsmith and Granny Smith, amongst others.

In our first insert, we will discover why some varieties disappear.

When an agricultural consultant visits a farm today, he normally talks about eleven varieties with their numerous mutations. We often hear that the sheer number has become confusing and it is really hard to make a choice about what to plant.  That is because not too long ago, in the late 1970’s and 1980’s, there was only a choice of three to four varieties to plant. You either planted Golden Delicious (FFTRI Golden or Smoothee), Red Delicious (Topred or Starkrimson) or Granny Smith.

Looking at our history of available varieties, it shows the extent of the grand trial, performed commercially to see which varieties were suited to the Cape’s climatic conditions – not forgetting the market acceptability of these varieties. In 1913 the number of apple varieties available to plant in South Africa was 60.

Why do apple varieties disappear?

With South Africa at the 34-degree latitude, we have had colder and warmer periods over the last century or so. The overriding factor has almost always been a lack of winter chill. When importing apple varieties from colder climates, the first test was always to see if they would crop and if the crop was enough. A lot of English apples fell by the wayside in this first test, as it was just nog cold enough grow them here.

When we planted apples in the beginning it was basically a constant trial. It is quite astonishing how quickly some of the earliest apples became floury. Something like Red Astrakhan was almost already mealy on the tree, so one can understand why it is no longer planted here.

Any apple variety has to bear good crops year after year. If not, it gets grubbed. To bear good crops, the tree has to grow, flower, have flowers pollinated and not drop fruit off the tree before it can be harvested. Some of the varieties grew beautiful good-tasting fruit, but there were just too few of them. Both Reinette du Canada and The Flower of Kent (Newton’s apple) drop the fruit just as the apples ripen. Then, if one looks into packhouse deliveries over the last 50 years, the on-and –off-year phenomenon in the delivery of many of these old varieties is all too evident.

We really wanted to grow some of these ‘new’ international varieties. Cox’s Orange Pippin was one of them. Although the tree did not grow well in most of South Africa, the market locally and internationally was really attractive for “Cox”. Cox was planted in all areas and although it bore well enough, bitterpit or cracking was its downfall. There was only one farm (in the mist belt of the George mountains) that could grow it successfully. Eventually, they became the only grower of Cox in South Africa exporting to the UK. The single apple export channel at that time (Deciduous Fruit Board), just could not manage a variety that only came from one farm, in an area with no other apple orchards. Eventually, the farmer gave up on Cox and replanted the orchard.

Two varieties that bear very small fruit are York Imperial and Drakenstein. An average size well below 50mm made them quite unattractive to buyers, who had a wealth of other apples to choose from. Although both store well, they were just too small for the market.

If you are not the most beautiful on the block, people start to forget you and run after the best-looking apple. Green had to be green, and red had to be red. Once we had Granny, many of the other green apples fell by the wayside as they were just not as green as Grannies. Koo developed a blush and the green colour became quite dull. Versveld, on the other hand, had good crops every year but sometimes the apples were quite red on the one side – something that Grannies only developed occasionally.

The same was true for the “bi-colours”. If we could not find redder mutations, they were eventually no longer planted.