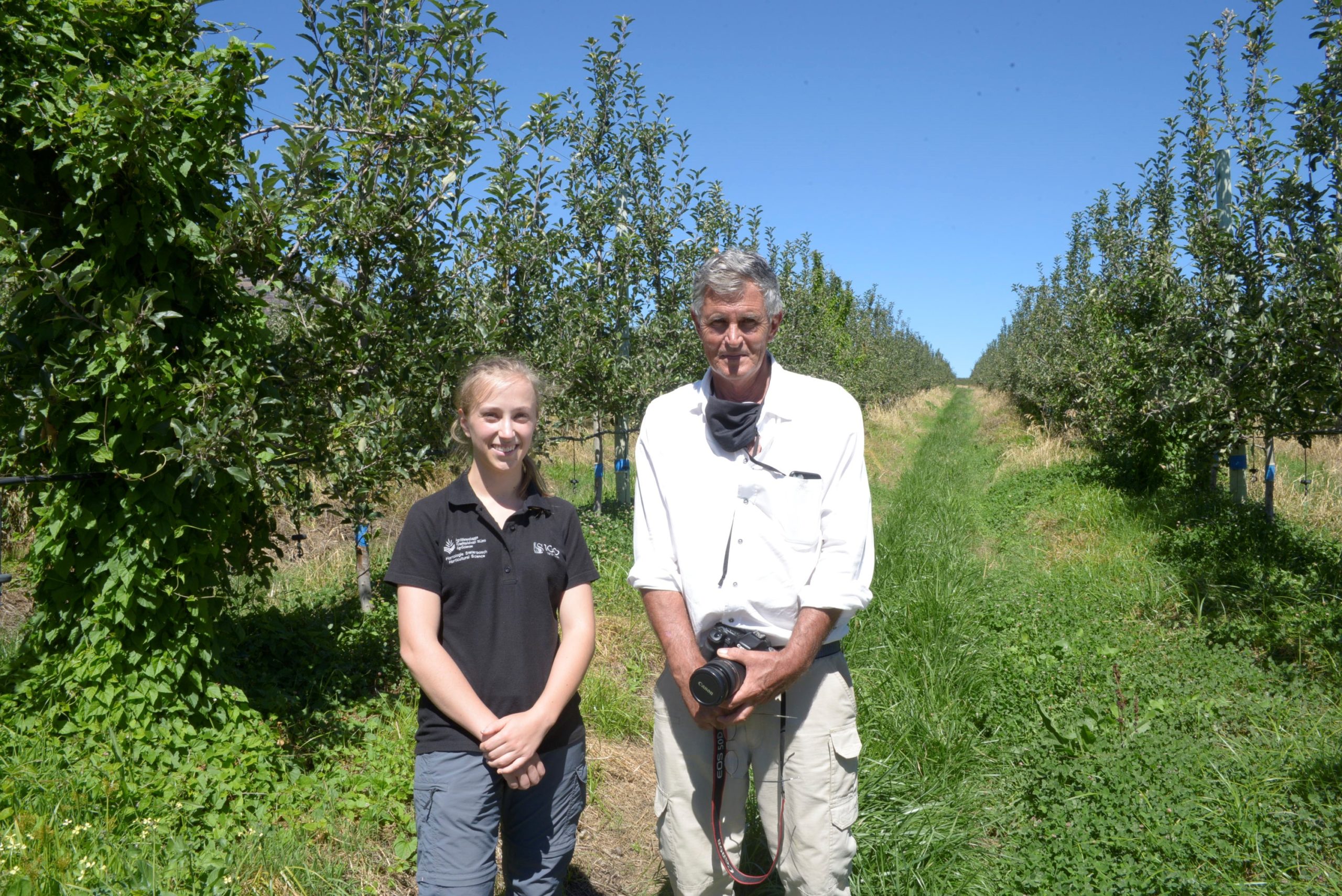 Research on soil health and orchard floor ecology is an emerging theme in agriculture as it is an important component of sustainability.  Hortgro Science Crop Protection Manager, Matthew Addison along with Hendrik Pohl, had the vision to initiate a cover crop project in 2017. Addison shares what the team has found to date and why he believes using ‘diverse cover crops’ is essential for future deciduous fruit production in South Africa.

Despite the aggressive March sun, Matthew Addison looks cool in his white shirt and khaki pants. Standing in one of his cover crop trial blocks, he explains enthusiastically the basic purpose of the project: Namely, to answer the question of whether diversity in cover crops, benefits the production process and orchard ecology?

For the investigation, Addison decided on two differential trial areas. The one on Bokveldskloof in the Koue Bokkeveld, and the other on Lorraine in the Warm Bokkeveld. Both ZZ2 entities.  This is not a coincidence, says Addison, “as Hendrik was very enthusiastic and he and his staff have contributed hugely to the trial”. The trial started in 2017 on Lorraine. Due to erratic weather conditions in the Koue Bokkeveld, they had to delay the trial on Bokveldskloof for a year, which got underway in 2018.

Now, four years later, he can confidently answer the original question, namely that cover crops is not just a green fad and that it should be considered by any grower who is serious about soil health and sustainable production practices.

Addison finds his argument for cover crops in ecological theory, meaning that plant diversity will result in sustainability (a stable ecosystem over time). And equally important, resilience. How to prove the value of cover crops in an agri ecosystem is not easy, concedes Addison. “In order to measure soil health and soil ecology you first need to answer what is good and what is bad?”

With all this in mind, he set out with Ansuli Theron, a Masters student/research assistant, to measure and manage. One of their first goals was to measure production. That they did by harvesting cover crops in a half square metre to determine plant growth. The most diverse treatment produced an impressive (in equivalent) ten tonnes of dry mass per hectare.

Secondly, they assessed the diversity and growth of the plants by measuring it photographically and physically. “We wanted to see what was growing and how tall it was.” They used a measuring board and combined that data with image analysis, to establish how high and what percentage of coverage they had, as well as count the plant diversity.

From a biology perspective, the team regularly collected soil samples at 20 m intervals at pre-determined sampling areas, from tree and work rows. The samples were assessed by Nemlab for nematodes, including plant-parasitic nematodes (“that we need to keep an eye on, as there is a relationship between some cover crops and plant-parasitic nematodes”). “The analysis gave us a nematode diversity index that is proving a stable measure on how balanced your system is,” he says, “I can report that we had fantastic results.”

“We recently also started doing tests that measure bacterial and fungal diversity via Sporatec. On top of that, bacterial enzymes in soils will also be investigated, in future.”

The team now has a 4 and 5-year record that shows that biological activity stabilizes over time. According to Addison, the value is that the two trial sites show that they differ from treatment to treatment. “They show that we can manipulate the system. Secondly, cultivation and planting were very disruptive, and it took time to stabilize and is still dynamic. Regenerative agriculture has proved that one should avoid disturbing soils which is difficult when establishing apple orchards. But we could start early, plough and establish diverse cover crops and then plant the trees. Or can we retain stable soils while replanting? Think apple replant disease…is it a symptom of unbalanced soils?”

Addison is in entomologist heaven. But what are the benefits for growers?

Some of the main findings to date
Addison says that the research results to date are complex and intriguing. “At the top of my list is the nematode diversity results. These results are a very reliable measure and it reflects stability in the system that is developing over time and is still mobile four years later, meaning it doesn’t just re-establish,” he says.

“Secondly the carbon increase in the soils specifically in the work row is also impressive. I was expecting more action with orchard pests but we had very little. There was a bollworm problem in one year, but it was not confined to this block or this farm, it was this area.”

Then there are the “new” guys on the block. Collembola (small primitive insects that live on and below soils) and plays an important role in orchard soil ecology. “The diversity of collembola is new to us, and it’s been tricky, since it’s a first time effort to study it in orchards, but it can tell us a lot. So yes we are excited about adding this study to the project.”

The team has also seen the value of the use of some clovers in cover crops. “Clover helps to put nitrogen into the soil which means you save substantially on nitrogen inputs, and the trees speak for themselves – setting a good crop.”

“In general we have seen better available plant nutrients with cover crops. Remember you are drawing nutrients into your cover crops, they get mown or rolled and release the nutrients. The soil is just better,” says Addison.

Lastly, they have also seen how cover crop flowers influenced bee activity during blossom periods. “We did a preliminary trial in Warm Bokkeveld that showed if you do have flowers in your cover crop it tends to retain bees on the blossoms in those rows, i.e. your pollination should be more efficient with flowers than without flowers. Bee activity in those trials showed it very, very clearly.”

The benefits for growers can be summarised as “the more diversity you have the better your biological control is going to work”. “In this orchard, there is non-detectable woolly-aphid and we don’t have mite problems. That is in itself huge. But our primary goal is to improve soils over time. If you look at results to date, both soil organic matter and stable carbons have increased each year.”

Where to next with cover crops?

Addison agrees that there is still a lot of work that they need to do. “We have to include soil moisture in the study to understand the water holding capacity of soils with increased carbons in them. We will need to do water ingress studies on these soils after four years of cover cropping vs the farm standard. We still have a huge amount to learn about how to get cover crops established successfully, and maintaining the diversity in the cover crop, we want broadleaf diversity and flowering plants.”

“The integration of weed management into the system is critical, at the moment we rely on herbicides, they are becoming limited. We need to learn how to control our weeds in an integrated manner. We are also investigating the use of indigenous cover crops. Most of what we have used were exotics, simply because they were easier and cheaper to get hold of, but it shouldn’t be. We will look into getting indigenous cover crops.”

Addison is in constant consultation with the project’s advisory team and currently, the list has over thirty different proposals. “Cover crops and orchard soil ecology is very complex. It involves a lot of different disciplines, and to decide on the value of a single trial is very difficult,” he says.

He points to the trial block behind him, “this thinking of this trial is five years old. But I can tell you people are excited and there is a lot of action happening on farms from Elgin to Villiersdorp, all of it involves new thinking.” Regenerative thinking.

Read more about the trial layout and management of cover crops here.

(Videos and pictures by Carme Naude.)