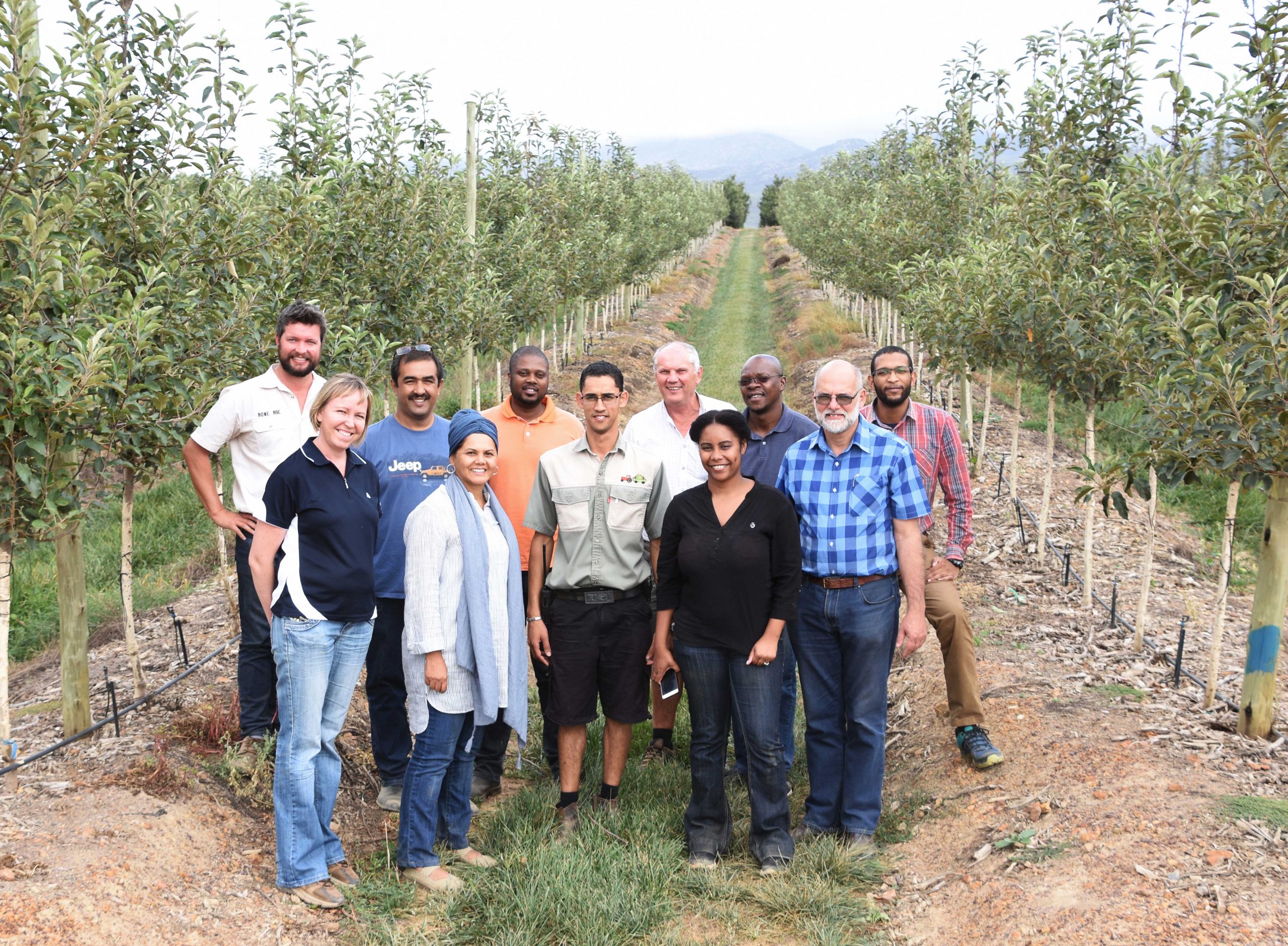 “Our mission is to enable upcoming farmers with the necessary skill, knowledge, and tools to prosper,” says Mariette Kotze, Hortgro’s group operations manager.

Numerous recent documents and reports have allowed the pome and stone fruit industry to reflect extensively on the positive work done over the past decade to help transform the sector. These endeavours are driven by Hortgro through the Deciduous Fruit Development Chamber and are in line with regulations set out by the National Agricultural Marketing Council (NAMC).

“Over the past decade, our producers’ statutory levies have created a platform for sustainable development and transformation. The total amount of funding from levies including funds geared from invaluable partnerships has allowed us to invest in 102 black-owned businesses in four major provinces; with the total amount of funds, including invaluable partnerships, invested over the past decade was R224.2 million. A total of R7,3 billion worth of new orchards under black-owned management are already established, and more than 2300 new jobs created,” Kotze explains.

The 4806 hectares planted under black-owned management constitute 9% of all pome and stone fruit plantings in South Africa. Of the 102 transformation projects in which HORTGRO has played a facilitating and implementing role, 37 are 100 % black-owned, with the rest having equity partnerships of varying percentages. The majority of qualifying BEE fruit farmers are however black-owned businesses. Through current initiatives, the ownership at the primary level will increase to 13% over the next 5 years.

Initiatives such as the bursary scheme (which in the last five years has supported 138 undergraduate and 260 postgraduate students to the tune of R26,5 million) and skills development for farm workers (for instance through Agri’s Got Talent and the Fruit Workers’ Development Trust) have further strengthened and broadened the industry on various levels. Most recently, an R600 million ring-fenced debt facility created through HORTFIN provides financial support to upcoming producers and agripreneurs in the value chain.

Kotze has been the driving force behind these industry efforts for the last nine years. To her small, dynamic team of project coordinators and agricultural economists, initiatives such as the Boompie Project and the DFDC Commercialisation Programme (which helped establish new orchards and equip upcoming farmers) are not merely names in annual reports.

It is what drives them.

Chrismaine Abrahams, Ulrich Arendse, Melissa Cain, and Xolela Dlikilili are the ones calming nerves on the other side of phone calls. They provide advice and scrutinize documents, grant applications, quotations, and contracts when needed. They help the upcoming producers they have taken under their wings to network with the right people and to form lasting linkages for future support.

Their work is supported by “the best of the best” in the industry when it comes to research and technical knowledge, says Kotze.

When evaluating prospective and ongoing projects, the team constantly ask themselves whether initiatives have the potential to become sustainable and whether participants are truly empowered and given enough skills to be part and parcel of decisive decision making. The aim is that participants are so thoroughly involved in management that they will be able to stand on their own feet should government and industry support no longer be available.

The team’s passion, care, and dedication become apparent when Kotze highlights some of the 40 projects they are currently involved in.

“Our job is very much like farming, in that it is a lifestyle,” she believes.

“It’s not an 8 to 5 type of job. It’s not cold and clinical. You invest a lot of yourself in the projects. You think about them all the time, about how to help even further within the constraints of limited funding. Because of all the after hours travelling and phone calls, you often sacrifice your own family time in the process,” Kotze explains.

To Kotze, it is essential that her team of project managers and coordinators form a personal association with the projects they work on.

“Then they can truly champion and fight for them,” she believes. “It might sound as if we are not objective, but we have over time learnt that some things are emotional and that you need to distance yourself from situations. Yet, they still have a way of tugging at your heartstrings.”

Chrismaine Abrahams has been working side by side with Kotze for the past 8 years: “I enjoy working with people and bringing about change. No day is the same. I enjoy tackling new challenges. Every day provides new learning opportunities.

“It’s a good feeling to see that your work has a positive impact on the projects. Seeing the growth and success that has taken place over the years is rewarding,” Abrahams adds.

Ulrich Arendse, who brought accounting and auditing skills to the team, finds fulfillment being able to help others make a change. He acknowledges that his eyes have opened to the importance of agriculture since becoming part of the transformation team a year ago.

Melissa Cain echoes their sentiments, and adds: “I’m proud to see upcoming farmers grow and the progress they make, even through difficult times like the drought and the pandemic.”

Agricultural economist Xolela Dlikilili, who came to the deciduous fruit industry with a background in livestock management, is constantly encouraged by America’s first president, George Washington: He said agriculture is “the most healthful, most useful and most noble employment of man (woman)”.

“Farming requires people who are passionate about it and are encouraged about the prospects of feeding the ever-expanding global population,” Dlikilili notes.

Giving of her time and mentoring people comes naturally to Kotze. Since joining HORTGRO at the end of 2002, initially as a part-time research assistant, she’s often asked to take people under her wing.

“I find fulfillment in helping people. It’s important to me that we are able to make a difference in the lives of producers, irrespective of who they might be.”

Despite her own people-centered nature, Kotze fully realises that her team’s goal is to create feasible, successful, and sustainable business ventures.

“Our success is measured by the success of our producers (who are part of HORTGRO projects),” says Kotze.

“The longterm future of the agricultural sector largely depends on its ability to invest in skills development, transfer knowledge and adapt, evolve and develop new ways of doing things,” adds Dlikilili.

To this end, the pome and stone fruit industry is committed to transformation at a primary production level, throughout the value chain and research capacity. The aim is not only a transformed industry by 2050 in terms of ownership, but also to double the industry as a whole.

Most current projects are focused around Ceres, Elgin, Villiersdorp and the Langkloof. Kotze admits that practicalities such as a lack of access to enough water and infrastructure (such as packing facilities and lucrative distribution channels) are however definitive spanners in the works hampering the establishment of new commercially successful orchards in non-traditional areas of South Africa.

To Kotze the various economic development initiatives HORTGRO has successfully set up in the past decade confirm the value of public-private partnerships and working together well with provincial departments of agriculture.

“Our results would not have been possible without these partnerships, including the commercial grower constituent,” she adds.

Recently her team received another definite stamp of approval when HORTGRO was asked by the Western Cape Department of Agriculture to implement one of their strategic projects and help 50 projects (17 of which are in the deciduous fruit sector) in various stages of development to become fully commercialised.

Is there a favourite among the many projects that she’s already had a hand in?

“There’s a little bit of me invested in each one of them,” says Kotze, who is thankful for each success and every lesson learnt even from projects that did not make the grade.

So far, at least ten projects that the transformation team has been involved in, have become commercially viable. Kotze salutes each and every producer who despite the odds stacked against them, has made a success.

“There is no margin of error within which they are allowed to operate, and they have to try to build up to something new while the whole world is watching. This takes a lot of effort and guts.”

Important lessons that Kotze and her team have learnt through their involvement in transformation projects include:

Caption: Three members of Hortgro’s Transformation A-Team with industry stakeholders. Mariette Kotze (in front far left), Chrismaine Abrahams (in front with the black top) and Ulrich Arendse (at the back far right).